Our dedication and determination, our spirit of resilience is under severe test. Unity at all levels of our vast organization is of paramount importance: Smt. Sonia Gandhi 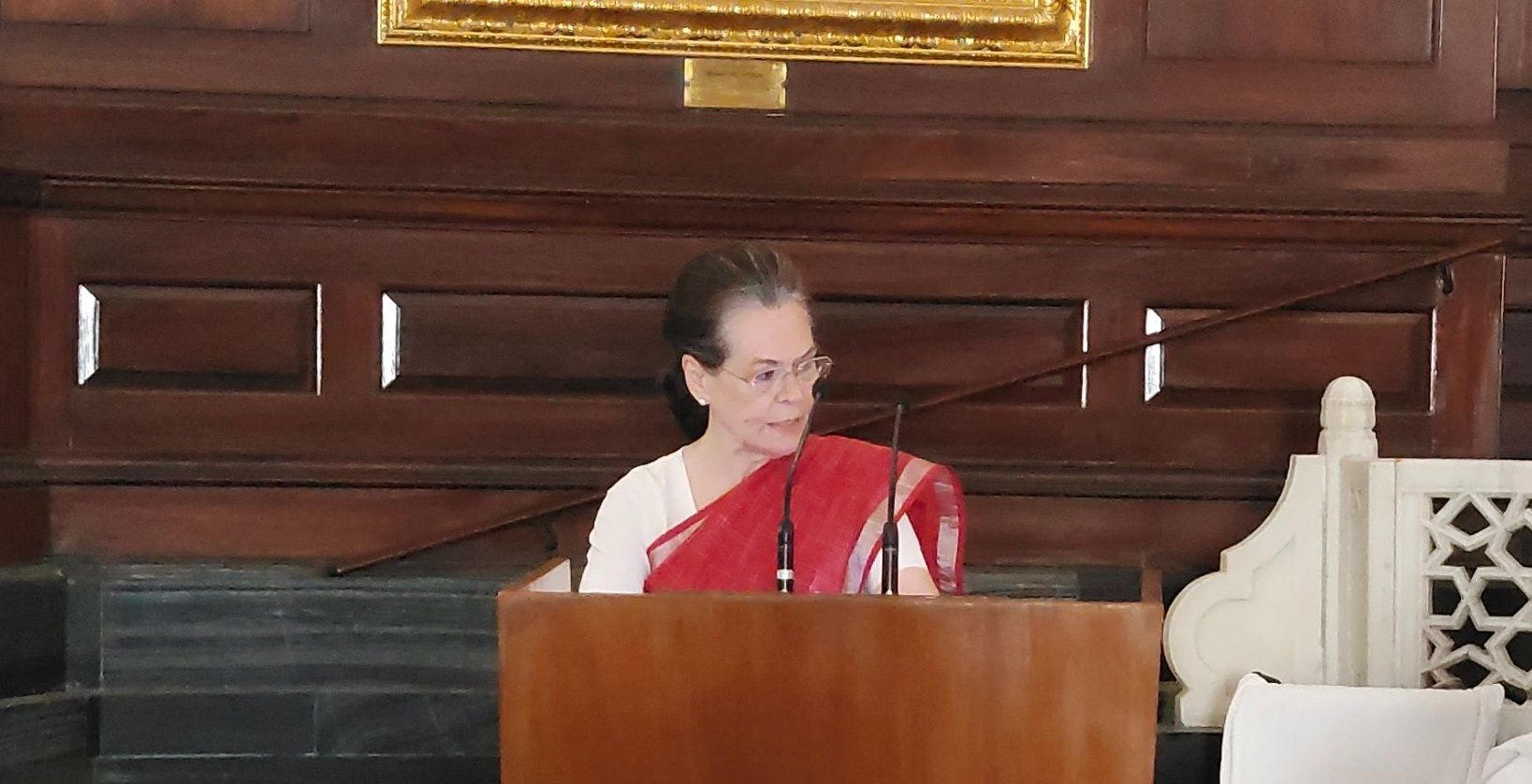 Four of our very senior and experienced colleagues have just retired from the Rajya Sabha, more will retire before we meet next. Each and every one of them has contributed much during their tenure. I thank them all. I am sure they will all remain involved in some way or the other in public and political life, and continue to work to strengthen our party.

This session of Parliament has seen the Budget as well as discussion on the functioning of various ministries. A number of you have participated and put across our party’s viewpoints forcefully. Issues of public importance have also been raised by our MPs in both Houses.

Of course, the Government’s attitude has not changed. MSMEs are still in a most precarious condition. There is no sign whatsoever that the commitments made to the farmers are going to be fulfilled in any significant manner. Prices of cooking gas and oil, petrol, diesel, fertilizers and other essential commodities have risen to an unbearable limit and continue to rise. A few days back, our party launched a nation-wide Mehngai-mukt Bharat campaign in which many of you took part. This must be sustained.

In matters of governance, it is inevitable that some do the real work and lay the foundations while others claim the credit. I am glad that at least two landmark initiatives of the Congress-led UPA government much criticized by no less a person than the Prime Minister have turned out to be saviours for crores of our people in the last two years. I am of course referring to the National Food Security Act and Mahatma Gandhi NREGA. Even though the minister concerned has denied it, inordinately delayed wage payments however, continues to be a serious issue. Inspite of repeated attempts, we have been unable to get the Government to agree to a discussion on the situation on our borders, a discussion that could only have deepened the sense of collective resolve. The value of non-alignment as a foundational principle of the nation’s foreign policy that was criticized so much, has now, I am glad to note, been rediscovered even though it may not be acknowledged as such.

That said, the future of the thousands of students who have been evacuated from Ukraine needs to be assured at the earliest. And sooner rather than later, the continuing astronomical cost of medical education in the country needs to be addressed.

A joint forum of central trade unions supported also by our INTUC, had given a call for a nation-wide strike on March 28 and 29 to protest against the Central government’s policies affecting workers and farmers. Labour laws have been diluted at a time of growing unemployment and livelihood insecurity. Interest rates on employee provident fund accumulations have been reduced considerably. Public sector enterprises, the one important avenue for employment of scheduled castes and scheduled tribes are being sold off under the fancy name “Asset Monetization”. This will be another disaster as demonetization turned out to be.

The divisive and polarizing agenda of the ruling party and its leaders has now become a regular feature of the political discourse in state after state. History not just ancient but also contemporary— is mischievously distorted and facts are maliciously invented to add fuel to this agenda. It is for us all to stand up and confront these forces of hate and prejudice. We will not allow them to damage the bonds of amity and harmony that have sustained and enriched our diverse society for centuries.

The ruling establishment continues to target the opposition, its leaders and workers. The full might of the state machinery is unleashed against them. Maximum governance to those in power clearly means spreading maximum fear and intimidation. Such blatant threats and tactics will not frighten or silence us, nor will we get cowed down.

I am very well aware how disappointed you are at the recent election results. They have been both shocking and painful. The CWC has met once to review our performance. I have met with other colleagues too. I have received many suggestions on how to strengthen our organization. Many are pertinent and I am working on them. Holding a Shivir is also very necessary. That is where the views of a larger number of colleagues and party representatives will be heard. They will contribute to put forward a clear roadmap on the urgent steps to be taken by our Party on how best to meet the challenges we are confronted with.

The road ahead is more challenging than ever before. Our dedication and determination, our spirit of resilience is under severe test. Unity at all levels of our vast organization is of paramount importance and speaking for myself, I am determined to do whatever is needed to ensure it. Our revival is not just a matter of importance to us alone. It is, in fact, essential for our democracy itself and indeed for our society as well.

Friends, we will not be gathering as a group for another three months. So let me wish you all the very best for this intervening period. Meanwhile, I look forward to your full involvement in the forthcoming campaigns being launched by our Party.