It is our great pleasure that we have got a chance to visit the great land of Bundelkhand: Priyanka Gandhi Vadra 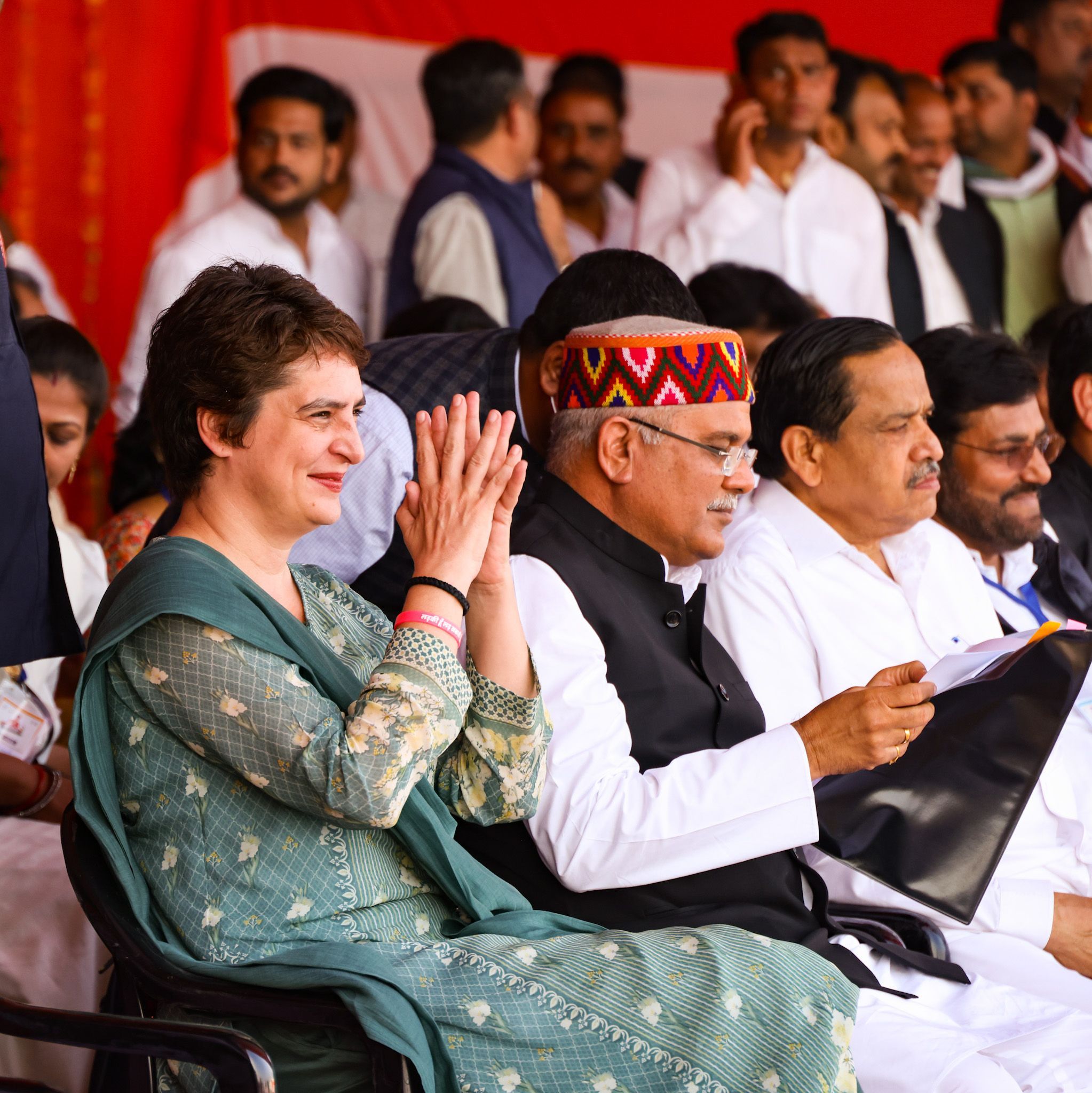 The Uttar Pradesh Legislative Assembly election is also the most important one for the major political parties. Even the Congress party is now fully engaged in strengthening the ground for itself before the upcoming elections. Congress’ National General Secretary Smt. Priyanka Gandhi addressed an election meeting at Mahoba of Bundelkhand on November 27, 2021, which she started in Bundeli language. Smt. Priyanka Gandhi said, “The Prime Minister himself travels in an aircraft worth 8000 crores but does not waive the loans of farmers.” She also targeted BJP for its hoax of putting up photos in its posters of fake developmental works presumably done at various places.

Welcome to all the brothers and sisters of Bundelkhand

Congress’ General Secretary and Uttar Pradesh in-charge, Smt. Priyanka Gandhi started the ‘Pratigya Rally’ from Mahoba in Bundelkhand. Chhattisgarh Chief Minister Bhupesh Baghel, who was made the supervisor for the Uttar Pradesh Legislative Assembly elections, and the Pradesh Congress President Ajay Kumar Lallu were also present with Priyanka Gandhi Ji. In Mahoba, Priyanka Gandhi Ji started her address in Bundeli language and said, “Bundelkhand ke sab bahnan-bhaiya ka ram-ram, sab modiyan ko bahut-bahut pyar! Hamaar badd bhaag ki hamein Bundelkhand ki mahaan dharti par aabe ko mauka milo.” (“Welcome to all the brothers and sisters of Bundelkhand. Much love to all the daughters. It is our great pleasure that we have got a chance to visit the great land of Bundelkhand.”)

Coming to Mahoba has been a mixed Emotion

Smt. Priyanka Gandhi further said that people of Mahoba, I am very happy to come here but there is also some sadness along with it. Two weeks ago, I had gone to Lalitpur, where two farmers queuing for fertilizer had died and two farmers had committed suicide. When we went to the government centre for fertilizer, that too was closed. Under BJP’s rule, there is no fertilizer available, there is no water for irrigation. This government has not given anything. The Yogi government of BJP only makes false promises.

On the other hand, Smt. Priyanka Gandhi said about the posters of the advertisements released by the BJP going viral on social media that ‘BJP gives false advertisements. Modi ji inaugurated the Jewar airport and after that, the BJP leaders put photos on their social media saying that Jewar airport is very nice. But later it came to be known that that was a photo of China and PM Modi had gone to Noida to lay the foundation stone. They put photos of Chinese airports and photos of American factories in their advertisements. These people don’t care that the truth should be spoken.

Not only this, along with BJP, Priyanka Gandhi Ji also targeted SP-BSP fiercely. She said, ‘You have seen the intention of BJP in five years and you know very well what happened to you. BJP government is looting you. Even earlier, the governments had done the same thing. The SP government robbed you and after that, the BSP government came. Even then you were robbed. But we want such a government to come that really works. If our sisters come forward, this state will change. You will have to recognize your power for this.

Government buses are being used in BJP rallies

At the same time referring to the corona epidemic, Smt. Priyanka Gandhi further said that ‘When the corona struck, people were made to walk in lockdown. When the Congress sent a bus to help you people, BJP did not allow them to run. ‘Priyanka Ji further said that ‘Today, government buses are being used in their rallies. When people were walking on foot, where were their buses at that time?’During this referring to the issues related to agriculture, Smt. Gandhi also said that ‘The income of friends of the Prime Minister is 10 thousand crores per day and the income of farmers is Rs. 27 per day, but they are not doing anything for you.’

If Our Government is formed, we will buy Paddy for 2500

Announcing the election promises during her address, Smt. Priyanka Gandhi further said that ‘If our government is formed in the state, we will buy paddy for 2500 and the arrears of those who paid electricity bills at the time of Corona will be waived.’ Priyanka Gandhi said that ‘If our government comes to power, the entire loan of the farmers will be waived off, as well as the problem of stray animals will also be resolved, due to which our mothers and sisters have to guard the fields overnight. To get rid of this, we will implement the Chhattisgarh model and free them from this problem.

Priyanka Gandhi further said that “We have given the slogan ‘Ladkihun, Ladd saktihun.’ It means that we will solve our problems ourselves. We will give 40 percent tickets to women so that women are strengthened.” Priyanka Ji said that “We want to make special pledges for women. Mobiles and scooties will be given to the girl students. Women will get three gas cylinders free of cost. Bus travel will be free for women.” At the same time, Priyanka Gandhi told the people present that “Seek answers from those who win the elections. If they do not fulfil their promises, then do not let them win the next time. Know your strength. Seek an answer.”