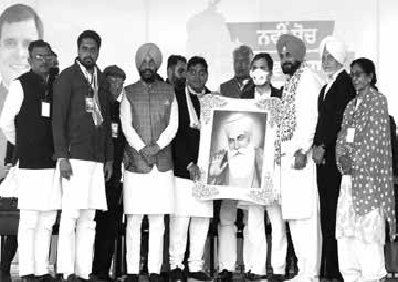 Jalandhar: Congress leader Shri Rahul Gandhi on January 27, 2022, said that the party will go into the Punjab Assembly polls with a CM face and the decision on it will be taken soon after consulting party workers.

He was addressing the party’s ‘Punjab Fateh’ virtual rally in Jalandhar in the run-up to the Assembly election. The digital relay was connected through LEDs across all 117 Assembly constituencies and 22 district headquarters of Punjab, where upto 300 people gathered at each location following the Covid-19 protocols.

More than 4,00,000 people watched on social media with 30,000 comments, 9000 shares and over 9 lakh people reach, within only two hours of the rally, making it the most successful hybrid virtual rally of the country. After paying obeisance at the Golden Temple, he offered prayers at the Durgiana temple, Ram Tirath Sthal and the historic Jallianwala Bagh.