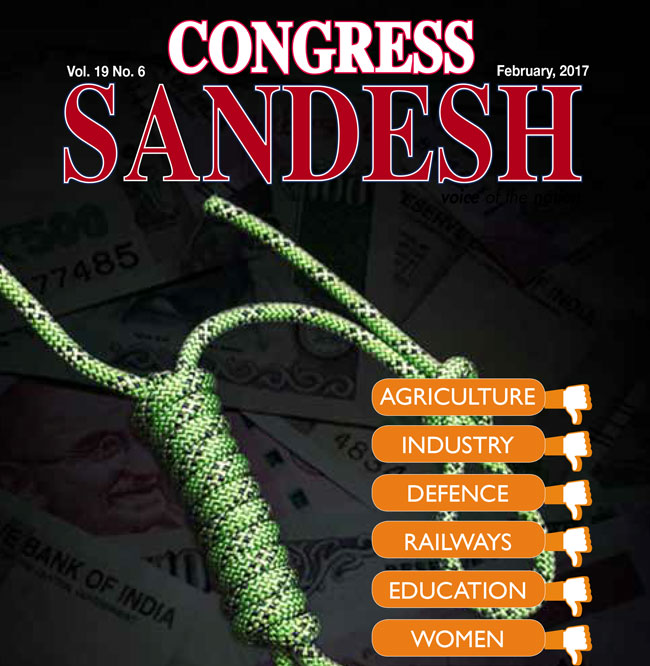 Contributions of the Congress Party is difficult to be ignored

During 1997  98, the growth rate of GDP came down to worrisome 5 % which was 7.8 % in 1996  97. The growth rate in exports sector witnessed a rise of 20 % but it also slipped for the next three years since 1996. The growth rate in exports sector became negative in 1998  99 (April  December). Likewise, the industrial development rate decreased a whopping 50%. It was a matter of great concern that even the growth rate of infrastructure sector also slowed down and it impacted the whole system. Foreign capital both in direct investment and in portfolio investment also witnessed a slowdown. The portfolio investment plunged into negative in 1998-99 (April  December).

The pressure of fiscal deficit on the economy also multiplied. In 1998-99, the government had to declare in its Economic Survey report that the economic situation had become so grim that it needed a rethinking of constitutional limits regarding fiscal deficit. It was declared as the need of the hour.

Apart from this, nuclear tests led to economic sanctions on India. It proved detrimental for the Indian economy. The BJP government went ahead with the nuclear tests keeping political advantages in mind. Political instability, coalition government by opportunistic parties, duality in eco-policies of the BJP government, opposing globalization and supporting swadeshi by its parent organization  all these factors contributed in slowing down the pace of economic reforms initiated by the Congress govt. During six and half year tenure, the BJP government derailed the Indian economy.

The people of this country well understood the harms inflicted by the BJP government on Indian economy and in 2004, gave the mandate to the Congress once again. The UPA government was formed under the leadership of the Congress Party. The Congress president Sonia Gandhi was nominated as the chairperson of the UPA who presented an unparalleled example of renouncement by humbly rejecting the post of prime  minister. She proposed the name of Dr. Manmohan Singh for the post of prime  minister. India once again began to march on the path of progress under the leadership of Dr. Manmohan Singh and Congress and UPA president Smt. Sonia Gandhi.

Infact India’s GDP growth rate under UPA was always 8 % + from April, 2004 till mid  2010, except for a dip during up the global recession, when the credit dried up and for the times the BJP started stalling parliament.  Congress party leadership has always acknowledged the important role of the Smt. Sonia Gandhi as a chairperson of the UPA had instructed the government to facilitate this sector. Prime Minister Dr. Manmohan Singh and the Finance Minister of India made many policies and took several steps to strength this sector.

Under the leadership of UPA chairperson Smt. Sonia Gandhi and PM Dr. Manmohan Singh, UPA government launched the flagship “Rashtriya Krishi Vikas Yojana” in 2007 to reorient the agriculture development strategies to meet the needs of farmers. Similarly the farmer’s participatory system of need production was given an impulse under the seed village scheme by organizing more than 6500 seed villages. Considering Agriculture credit as the driver of agriculture production the Budget 2013-14 proposed to increase the target to Rs. 700,000 crores from 575000 crores. During UPA government the interest subvention scheme for short-term crop loans on time will be able to get credit at 4 % annum. Nutrient based subsidy policy for all fertilizers other than urea was introduced.

Under the guidelines of UPA chairperson Smt. Sonia Gandhi and leadership of PM Dr. Manmohan Singh another major achievement of the UPA government was that it doubled the electricity production in India from 1,12,700 MW in 2004 to 2,34,600 MW in 2014. A capacity of 54964 MW added in the 11th plan which has a significant contribution from the privates sector. The success of the government’s international Civil Nuclear initiatives was manifest in the highest ever generation of electricity from nuclear power during the year 2011 at 32,455 million units. India under UPA signed Civil Nuclear Agreements with record number of countries. Russia, France, Germany, U.K., U.S., South Korea and Mongolia. Similarly, India emerged as a leader in Asia and holds 4th rank worldwide in wind power.

Since its inception quality education has been a prime objective of the Congress party and its visionary leader. Due to the right to education by the UPA government India has achieved “near universal education” at the primary school level and the dropout rates have also decreased. The outlay for education has been constantly increased the outlay for education has been constantly increased. There has been about 99 % enrolment at Primary Level education. Literacy rate in India is now 74 %. This is a substantial increase from the figures, 10 years ago, ushered by social Revolution by UPA. Gross enrolment in higher education, which was 12.3 % in 2006-07, had gone up to 18 % in 2011-12. UPA government also led to massive expansion in Higher Education  7 New IIM’s, 8 New IIT’s and 10 New NIT’s were established.

Apart from these major achievements in education sector 16 new central universities and 2 new school of Planning and Architecture and 6 new Law Universities were also established by the UPA government.

Congress party, its senior’s leaders and Congress governments always has a concern about the public health. Smt. Sonia Gandhi knew that the previous NDA government had ignored this issue of major concern, she instructed the UPA government to take appropriate measures to improve this sector. So the UPA government under the leadership of Dr. Manmohan Singh worked with zeal and devotion to improve public health. Since the launch of the National Rural Health Mission over 1.57 lakh personal have been added to the health system during 200512. Over 8.6 lakh Asha’s appointed to act as bridge between the communities and the health facilities in villages. A total of 70,000 beds have been increased in government health institutions and provision of essential and emergency facilities. The UPA government strengthened the infrastructure by taking up 594 District Hospital, 2721 community Health centers, 5459 Primary Health Centers and 31001 Sub-Centers for new constructions or renovations.

Under the leadership of UPA chairperson Smt. Sonia Gandhi the UPA government created a separate Ministry as the Ministry of women and Child Development with effect from 30 January, 2016. The UPA government also introduced protection of children from sexual offences Act 2012 and under Integrate Child Protection Scheme 548 Child Welfares Committees and 561 Juvenile Justice Boards were establish. Under the leadership of Dr. Manmohan Singh the National Mission for Empowerment of women was launched by the then government of India in 2010. Similarly UPA government established sexual Harassment of women at workplace Act on 26th February, 2013.

Under the leadership of UPA chairperson Smt. Sonia Gandhi and PM Dr. Manmohan Singh UPA’s India cut poverty at the fastest rate in its history by moving 138 million above the same poverty time used by the World Bank. This was under the Congress led UPA rule from 2004-05 to 2011-12. The UPA started the Mahatma Gandhi National Rural Employment Guarantee Act (MGNREGA) in 2006 which is the largest welfare scheme of its kind in the world because removal of poverty has been the prime concern of the Congress party. MGNREGA has special role in helping the poor and downtrodden to earn a living in an honorable way. MGNREGA initially covered 200 districts in 27 states to provide guaranteed employment to rural households for 100 days. In 2008 the UPA government extended the coverage of the scheme to all the districts of the country. In the following 6 years, an amount of Rupees Two Lakh crores was allocated  under MGNREGA the scheme now benefits 34.30 crore poor households providing them with employment.

The implementation of MGNREGA provided an opportunity to strengthen democratic process. Panchati Raj institutions have a key role under the Act. Gram Sabhas, sub help groups, local   monitoring committees, beneficiary groups and other farms of community organizations are the basic agencies which have to run and monitor the programme. This presents an enormous step towards the empowerment of vulnerable sections of the society. It helped the poor to fight poverty, disease and ineptness. MGNREGA is a unique social security system. It confers upon groups the right to demand work when they need it. This scheme was especially made for Scheduled Castes, Scheduled Tribes, for poor women, who are the worst sufferers of social inequality. MGNREGA is the gift of UPA to our people to assist them to fight poverty.

After the rural job guarantee programme the UPA government started food security for nation’s two third populations the right to 5 Kg. of food grains every month at highly subsidized rates of Rs 1-3 a Kg. however, about 2.43 poorest of the poor families covered under the Antyodaya Anna Yojana Scheme under PDS (Public distribution System). Would get legal entitlement to 35 Kg of foodgrains per family per month, infect there was a threefold increase in food subside during UPA tenure. As a result of these policies there was an average decline in poverty at two percent per annum.

UPA is the only government is Modern India to pass the historic right to information Act, 2005 to usher in transparency in governance through citizen participation RTI Act has empowered lakhs of individuals and have made the state responsible. A revolution has taken place ever since and people have become more aware of their rights and procedures. This is also very interesting to know that UPA government was the first government is India to present a white paper on Black money in May, 2011. The UPA government also introduced UID to more than 51 crore Aadhar cards giving people access to direct benefit transfer to individual beneficiaries of various social sector scheme.

These facts prove that under the leadership of UPA chairperson Smt. Sonia Gandhi and UPA government led by PM Dr. Manmohan Singh, the country was on the right track of rapid growth and this tenure of Congress led UPA government was a saga of success.