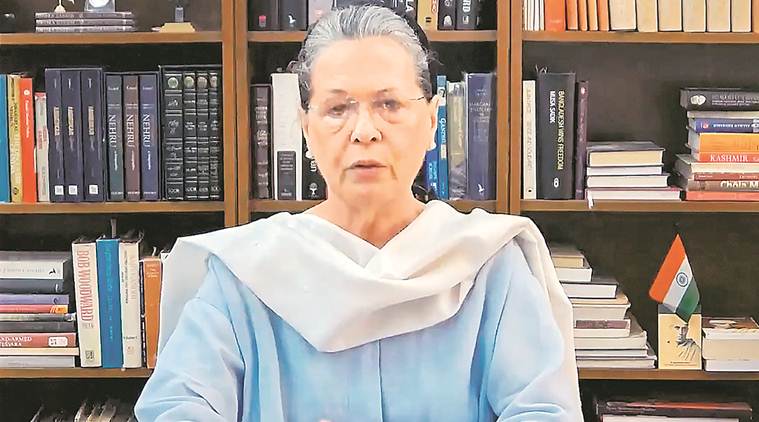 We are still in the dark about many crucial aspects of the crisis. Seeking the government’s response on the details of Ladakh face-off and the “way forward”, Smt. Gandhi stressed that “valuable time was lost between May 5 and June 6”.

We meet today in the aftermath of a tragic conflict and our hearts are filled with great sorrow & anguish. Let me begin by paying homage to the brave soldiers of our Army, who laid down their lives as also convey my deepest condolences to the bereaved families. To the injured jawans, we wish them a speedy recovery and good health.

This meeting, in my view, should have come sooner and immediately after the government had been reportedly informed about the Chinese intrusion on May 5th, 2020, into several places in Ladakh and elsewhere. As always, the entire nation would have stood together like a rock and fully supported the government of the day in the steps required to defend the territorial integrity of the country. Alas! that was not to be.

In fact, even at this late stage, we are still in the dark about many crucial aspects of the crisis. We have some specific questions for the Government: On which date did the Chinese troops intrude into our territory in Ladakh? When did the government  find out about the Chinese transgressions into our territory? Was it on May 5th, as reported, or earlier? Does the government not receive, on a regular basis, satellite pictures of the borders of our country? Did our external intelligence agencies not report any unusual activity along the LAC? Did the Military Intelligence not alert the government about the intrusion and the build-up of massive forces along the LAC, whether on the Chinese side or on the Indian side? In the government’s considered view, was there a failure of intelligence?

We, in the Congress Party, believe that valuable time was lost between May 5 and June 6, the date on which the Corps Commanders meeting took place. Even after the June 6 meeting, efforts should have been made to talk directly, at the political and diplomatic levels, to the leadership of China. We failed to use all avenues and the result is the loss of 20 lives as well as dozens injured. I would urge the Prime Minister to kindly share with us all the facts and the sequence of events beginning April this year till date.

The question is, what next? What is the way forward?  The entire country would like an assurance that status quo ante would be restored and China will revert to the original position on Line of Actual Control.

We would also like to be briefed on the preparedness of our defence forces to meet any threat. In particular, I would like to ask what is the current status of the Mountain Strike Corps, with two mountain infantry divisions, that was sanctioned in 2013? Should the Government not treat it with utmost priority?

We, in the  Indian National Congress, and the entire opposition unitedly stand by our defence forces and are prepared to make any sacrifice to ensure they are battle-ready. The Entire nation expects that Government will take all Opposition Parties & the country into confidence and brief us regularly so that we may present to the world a picture of unity and solidarity.

Prime Minister Modiji, I thank you for inviting the Indian National Congress to this meeting. Jai Hind!

New Delhi: Congress leader Shri Rahul Gandhi on 20th June, 2020 morning, tweeted two questions for the government, a day after Prime Minister Narendra Modi held an All-party meeting to discuss the India-China clash at Ladakh on 19th June, 2020, in which 20 Indian soldiers were killed. “Why were our soldiers killed?”, he asked after PM Modi on 19th June, 2020, asserted that “neither is anyone inside our territory nor is any of our post captured”.

“PM has surrendered Indian territory to Chinese aggression. If the land was Chinese:

1. Why were our soldiers killed?

2. Where were they killed?” Shri Rahul Gandhi tweeted.