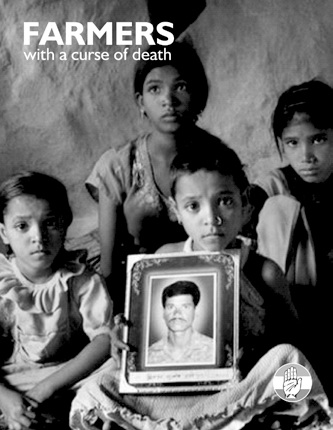 The farmers are up in arms. The country is burning with the fire of their anger and it is spreading like a wildfire from MP, Maharashtra, Rajasthan to Punjab and UP among others.

Indian farmers are caught in a tragic paradox. Whether it is a drought or a bumper harvest their life remains unmitigated. In both the situations they remain to be at the receiving end. If there is no harvest they are left to fend for themselves and if there is a surfeit of it, they can’t get proper price for it. They are forced to trudge on the double edged sword and there is no escaping, perhaps except taking shelter in flight. Never before has the farming community been placed in such a deplorable predicament as they are in now, thanks to the Modi government’s hoax call of relief.

They are caught in the political quagmire created by the ruling NDA dispensation at the centre. The government seems to be playing pranks while the farmers are dying in most parts of the country. Just contrast the truth: 54% of the country’s population is dependent on agriculture and according to the report of the Niti Ayog, around 53% of the farmers are below the poverty line and struggling to make both ends meet. 58% farmers are forced to sleep with empty stomach while about 4.70 crore families are languishing under debt. The farmers owe 12.60 lakh crore as debts, with they are unable to pay back.

After the ghastly incident of farmers being shot dead in Madhya Pradesh on June 6, the ghost of election promise made by the BJP to farmers in the politically sensitive states of the country has surfaced to haunt Prime Minister Narendra Modi. The reason is very simple. The rising demand of the farmers to fulfill the bailout package, as promised by the PM during the election campaigns, has stirred the hornet’s nest as other states too have joined the chorus in demanding the federal government offer an agriculture bailout package across the country.

During the hard-fought election campaign, Modi pledged that if his party was voted to power in Uttar Pradesh, it would write off loans of farmers. Earlier this year, the Bharatiya Janata Party formed government after securing a significant majority, but it conveniently forgot its electoral pledge of providing relief from the scorching debt trap on land holdings. The hard fact remains: about 52 percent of India’s 90 million agricultural households are indebted.

Outstanding countrywide agricultural loans as of Sept. 30, 2016 were at 12.6 trillion rupees, as farmers struggle with a decrease in land holdings, deteriorating soil quality, high input costs and low prices for their produce. According to the latest government data, 43.8 percent of the 18 million farm households in Uttar Pradesh had outstanding loans in the agricultural year that ended June 2013, with an average loan of about 27,300 rupees. The debt relief program also fails to provide assistance to landless farm workers who don’t have access to bank loans and some small farmers that depend on money lenders.

“Farmers are virtually on their death bed, so some booster dose will be helpful, but I don’t know for how long the farmers will be kept alive,” said P. Chengal Reddy, chief adviser to the Consortium of Indian Farmers Association, arguing the need for a loan waiver. But no one is listening his cry.

The chief ministers of Punjab and Maharashtra have issued a public plea for farm loan waivers for their states, however the government has not indicated whether it will consider a nationwide waiver program.

The traditional rallying point to voice anger and press for a demand known nationally as Jantar Mantar at national capital of Delhi, more than 30 farmers from southern state of Tamil Nadu staged a protest last month holding the skulls of farmers who had committed suicides in their region. They were demanding farm loan waivers, saying they are not in a situation to repay their debts because of severe droughts.

“It’s an atonement at one end of the failure of the past policies, and an appeasement on the other,” said Ashok Gulati, a professor with the Indian Council for Research on International Economic Relations (ICRIER), is reported to have remarked.

“India’s agriculture sector needs significant reforms, including land leasing, streamlining the incentive structure to promote private sector investment as well as policy changes for essential commodities and markets, he said. You need to have political will to carry out this agenda,” said Gulati.

The country has never been so undivided in realising the blunder, it committed by voting the Bharatiya Janata Party (BJP) under Narendra Modi, a master of political hyperbole, to power with majority. The country is becoming victim to his hyperbole and the sloganeering and the future of this country appears to be very bleak from the standpoints of both economic as well as social.

High levels of household debts have been recognized as a significant cause of farmers’ distress, the use of unconditional debt relief to improve living conditions, crop productivity and to reduce suicides is controversial.

The chief auditor in its 2013 report on the 2008 loan waiver program found cases in which deserving small farmers were left out while ineligible farmers were favored. The write off also took its toll on banks as the non-performing assets of commercial banks rose threefold in nominal terms in the four years to March 2013, according to a 2015 report from ICRIER.

Agriculture scientist M.S. Swaminathan said loan waivers should be used when farmers have no other way of getting relief from distress.

Though, the farm loan waiver has been considered to be one of India’s popular political tool to win elections ever since the UPA government under Man Mohan Singh in a historic move waived off the farmers’ loan in tune of a whopping 78000 crores in 2008, but no government could muster the courage to redo it. It requires burning passion and indomitable courage to take such an action. which offered borrowers a bailout program in which 37 million farmers benefited from waivers of Rs 78000 crores.

The Modi government at the Centre for its “dismal” performance on economic front in the last three years and said that the “dreams of the dream merchant, called Prime Minister Narendra Modi, have turned into a nightmare for the people”.

Addressing a press conference organized as part of the Congress’s campaign to “expose” the Modi government on completion of its three years in office at the Centre.

The three years of PM Modi’s rule has resulted in economic downturn owing to drop in agriculture growth, low investment and very less employment generation, the lowest in the last 10 years… His rule is best defined by the phrase, Adhiktam Prachar, Nyuntam Vichar (maximum promotion, minimum thinking)”. Describing Modi as an expert in “re-branding, repackaging and renaming.”

The Prime Minister appropriated several UPA programmes by changing their names. He also criticised Pradhan Mantri Fasal Bima Yojana, saying that while insurance firms collected Rs 16,000 crore from farmers as premium for the crop insurance in the last two years, farmers got only Rs 7,000 crore.

The government for not fulfilling its 2014 poll promise of giving farmers 50 percent profit over the cost of agriculture production as the Minimum Support Price (MSP).

The same has been done in the case of pulses despite a bumper crop last year, he said, adding that import of 50 lakh tonnes of pulses at a rate of Rs 45 per kg on the pretext of maintaining a buffer stock and selling it Rs 250 per kg in retail indicated some kind of “scandal”, he said. Pointing out the falling agriculture growth, which according to him has dropped from UPA government’s 3.5 per cent to the present 1.7 per cent, the former minister said: “If there is no growth in agriculture, the country will not progress and the gap between urban and rural areas will increase further.”

“In February 2015, the Modi government submitted an affidavit in the Supreme Court stating that giving 50 per cent profit over the production cost was not possible,”.

“For the first time, there has been a scarcity of employment. The PM had promised two crore jobs every year, but the government figure shows that in 2016, hardly two lakh, and in 2015, hardly 1.5 lakh people got jobs,”. The demonestisation has been a “disaster” as it severely affected small and medium industries, resulting in fall in economic activities.

The economy is on decline with the industrial, service and other sectors in a shambles. Agriculture continues to be in the grip of worst crisis. Farmers continue to commit suicide. Common people, they are really in distress. Prices of essential commodities are continuously rising, and essential services like education and public health are out of their reach,” the party said. “The corporates have been favoured with different financial moves that benefited them with about Rs 50 lakh crores. In the garb of promoting ‘Make in India”, all sorts of concessions have been given to foreign investors as well,” the party said. “The most disastrous move was demonetisation of the currency. Banks continue to be on the verge of bankruptcy.

The three years of Government is only “Bhashan or Ashvasan Yeh Hai Mera Shashan”. I would not like to delve on too many sectors but the crucial sector I want to startup is ‘Employment’. The biggest challenge, as we all know, is unemployment. With the largest aspirational society, the youth are looking for employment and what do we see, with approximately 520 Million people, who are youngsters, employment has been lowest in the last 7 years.

What is the state on Domestic Investment? What is the state of Bank Credit – Bank Credit is at 5.3%, lowest in the last 3 years. Domestic Investment is again at one of the lowest level this country has seen. Domestic Investment is at the historic low. Diversionary tactics used by the BJP of diverting the peoples’ minds, this ‘Kalakari ki Rajniti’ is the diversionary tactics used by the BJP and continuous assurances being given to the youth. The question is - has more jobs been created on lost in the last three years. How many jobs have been lost?

“We demand that the Government issue a white paper on its employment strategy. What is the strategy, we are not interested – the country is not interested to hear speeches, the country is not wanting to hearing assurances. They should present a white paper to this country on what is the employment strategy for the next two years based on the hard facts of the last three years,” Ramesh told the media persons.

Congress Party’s general secretary and veteran parliamentarian Kamal Nath, took the lid of the Modi’s government’s claims on the agricultural front by saying: “The Agricultural Sector is perhaps at the lowest - from 4.3% the Agricultural Sector has gone down to 1.3%. All the promises made to the farmers of 50% profit, have we seen MSP for wheat in the last three years, the percentage increase of MSP of wheat in the ten years of the UPA Government and we see the percentage increase of MSP in the last three years. This represents a very sordid picture.”

“We are seeing that the farmer suicides – historic farmer suicide – 35 farmers are committing suicide every day. No other country has the shameful record, in 2016-17, farmers suicide are expected to be about 16,000,” he lamented.

Ridiculing the Modi’s bloated claims, Shri Kamal Nath said: “No government in the world, in its history, has given the country more slogans than what the NDA-BJP Government has given in the last three years. No Government has spent so much on advertising after coming to power. What they have spent on publicity of these slogans.” “We all know the story of ‘Make- in-India, we all know the story of ‘Start-up India’, ‘Digital India’ and the amount spent on these schemes in its publicity is, in fact, so exorbitant that the benefits it has accrued are minor as compared to spend,” he rued.