Rahul Gandhi Pushed By Cops, Falls During Confrontation In UP 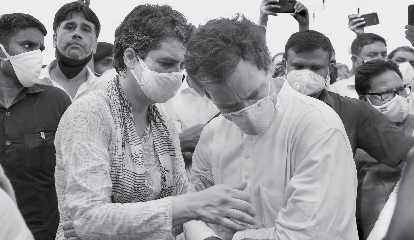 Rahul Gandhi Pushed By Cops, Falls During Confrontation In UP

A report on Hathras, Uttar Pradesh

New Delhi: Former INC President Shri Rahul Gandhi was pushed and thus fell to the ground in a tussle with the Uttar Pradesh police after he, his sister INC General Secretary in-charge Uttar Pradesh Smt. Priyanka Gandhi Vadra and scores of party workers were stopped from marching on the Delhi-Noida highway on their way to Hathras; to meet the family of the gang rape victim who died on 29th September, 2020.

The Gandhis were detained for violating a ban on large gatherings. “I am standing here peacefully. I will go alone then. I will walk alone from here to Hathras,” Shri Rahul Gandhi told the police.

Smt. Priyanka Gandhi alleged that she was also pushed and there were attempts to throw her to the ground.

“Why are you arresting me? What are the grounds for the arrest? What law am I violating?” Shri Rahul Gandhi said in a heated exchange with policemen, who said that they were charging him with “Section 188” - a law on defying official orders.

Shri Rahul Gandhi and Smt. Priyanka Gandhi Vadra were travelling to Hathras in a convoy when their vehicles were stopped in Noida near Delhi, at a point around 142 km from their destination.

They both got off their car and started marching with Congress workers. Soon, a large contingent of UP policemen blocked their way and tried to push them back.

Ahead of the Congress leaders’ planned visit, the UP administration on 3rd October, 2020 enforced a ban on large gatherings and put up barricades at the borders citing the coronavirus as the reason. Roads to Hathras were also blocked.

Other political parties condemned the incident and came out in support of the Gandhis.

“Reckless behaviour of UP police towards Congress leader Rahul Gandhi is extremely condemnable. It is reprehensible for those who are supposed to uphold the law to trample upon democratic values in such a manner,” tweeted NCP leader Sharad Pawar.

RJD leader Tejashwi Yadav wrote: “It is the duty and democratic right of the Opposition parties to protest against every indiscriminate misuse of power by the oppressive regime! Voice and will of the people cannot be silenced or suppressed! We unequivocally condemn the arrest of Rahul Gandhi and Priyanka Gandhi.”

Shiv Sena MP Sanjay Raut condemned Uttar Pradesh Police’s manhandling of Shri Rahul Gandhi, saying that while his party might have “differences” with the Congress and he understood that a “law and order situation” existed in the area, the cops’ treatment of a national leader was unacceptable.

“Rahul Gandhi is a national leader. We may have differences with them (the Congress) but a national figure from a leading family is going to meet someone. After stopping him... I accept Section 144 (prohibitory orders banning large gatherings) is in place and there is a law and order situation... but the way Rahul Gandhi was treated by the police... no one can support,” Shri Raut told news agency ANI.

“Rahul Gandhi is Indira Gandhi’s grandson. He is also Rajiv Gandhi’s son. Both have sacrificed their lives for this country. You may disagree with Rahul Gandhi’s politics but what happened in UP, where a Dalit girl was raped and murdered and a political leader is going to meet the family, is unacceptable. The way he was stopped... you saw it on TV... is unacceptable. His collar was caught and he was pushed to the ground... this is like the gang rape of democracy,” Shri Raut added.

A Father Not Allowed at Funeral”: Priyanka Gandhi Vadra on Hathras Case

New Delhi: INC General Secretary Smt. Priyanka Gandhi Vadra on 1st October said she had “never seen such injustice anywhere” on the gang rape and murder of a woman as seen in Uttar Pradesh’s Hathras. The police had hastily cremated her late at night, away from her family.

“This government has not allowed a father to perform the last rites of his daughter. This is injustice and this is how the government behaves with the people of Uttar Pradesh,” Smt. Priyanka Gandhi told media persons as she and her brother Shri Rahul Gandhi marched on the expressway connecting Delhi and Uttar Pradesh.

“I have never seen such injustice anywhere,” she said.

“When an incident like this happens, it is the responsibility of the government to support the family, give justice to them. But they did the exact opposite,” Smt. Priyanka Gandhi told.

Smt. Priyanka Gandhi and Shri Rahul Gandhi were briefly detained while they were on their way to UP’s Hathras to meet the family of the gang rape victim.

The crime has provoked nationwide outrage.

The woman, 20, died at a hospital in Delhi. She had suffered multiple fractures, paralysis and severe spinal injury when she was assaulted by four upper caste men from her village on September 14. The police said there was a gash in her tongue because she had bitten it when the men were trying to strangle her.

To add to the family’s pain, the UP police took away her body, drove to her village and cremated the body forcibly, with the family locked in their home.

The police case against former Congress President Shri Rahul Gandhi and Smt. Priyanka Gandhi were filed at the Ecotech One police station of Gautam Budh Nagar. The First Information Report names 150 Congress workers, who had apparently accompanied the two leaders.

“Just now police pushed me, lathi-charged me and threw me to the ground. I want to ask, can only Modi Ji walk in this country? Can’t a normal person walk? Our vehicle was stopped, so we started walking,” Shri Rahul Gandhi said.

The two leaders were detained on 1st October, 2020, in the afternoon amid scenes on the highway between Delhi and Uttar Pradesh. Shri Rahul Gandhi alleged that he was pushed to the ground and lathi-charged when he and Priyanka Gandhi Vadra were marching on the highway after their convoy was stopped by the police. They were later released and taken back to Delhi by the policemen.

UP Government Taking To Brutality To Cover Up Rape Incident: Rahul Gandhi

Congress leader Rahul Gandhi on 2nd October,2020, accused the UP government of taking to brutality to hide the truth of the Hathras incident and alleged that the family members of the victim were being beaten up, a behaviour which no Indian can support.

He took to Twitter to allege that neither any political party nor the media was allowed to meet the victim’s family in Hathras and they were also not allowed to come out.

He shared a video of a small child in the victim’s village telling the media that the woman’s family members were being beaten up and threatened by the authorities, besides not being allowed to meet anyone.

The child who claimed to be a relative of the victim alleged that the telephones of all family members had been taken away by police and their entire house and the neighbourhood was put under lockdown, with no one being allowed to enter or leave.

“The UP government has taken to brutality to cover up the truth. Neither us, nor the media is being allowed to meet the victim’s family. Neither are they allowed to come out. On top of this, the family members of the victim are being beaten up and brutalised. No one in India will support such a behaviour,” he said in a tweet while sharing the video.

“Will Ensure Justice for Sister”: Priyanka Gandhi at Prayer for UP Woman

“We will ensure justice for our sister. We won’t sit quietly till she does not get justice,” she said, addressing a crowd of Congress supporters and members of the Valmiki community who organised the event.

“The government did not help at all. Her family is feeling helpless. We will put political pressure on the government. She wasn’t even given a cremation following Hindu customs,” Smt. Priyanka Gandhi Vadra said.

“Wherever something wrong happens, we will be there to ensure that justice is served. No one can stop us,” Priyanka Gandhi Vadra said.

More than 30 MPs left for Hathras in Uttar Pradesh along with Shri Rahul Gandhi amid nationwide outrage over the alleged gang rape and torture of a 20-year-old woman who died at a hospital in Delhi. Later, however, only three of them – Shri KC Venugopal, Shri Adhir Ranjan Chowdhury and Shri P.L. Punia - were allowed to go with the Gandhis.

Shri Rahul Gandhi and his sister Priyanka Gandhi Vadra left from Delhi in a car, two days after both the Congress leaders were stopped while marching to the village in UP where the victim’s family lives.

After meeting the Hathras victim’s family, INC General Secretary Incharge Smt. Priyanka Gandhi Vadra on 3rd October, 2020, listed their demands which included a judicial inquiry through the Supreme Court and suspension of the district magistrate.

In a series of tweets, Priyanka Gandhi listed some of the demands and questionsof the victim’s family.

1. A judicial probe be conducted through the Supreme Court.

2. Hathras DM be suspended and not given a big post.

3. Why our daughter’s body was burnt using petrol without our permission?

4. Why we are being repeatedly misled and threatened?

5. We brought ‘flowers’ from the funeral pyre, but how do we believe that thisdead body is that of our daughter?” Priyanka Gandhi tweeted in Hindi.

Congress leaders Rahul Gandhi and Priyanka Gandhi met the family anddeclared that they will fight for ensuring justice to the Dalit woman who died after being allegedly gang-raped.