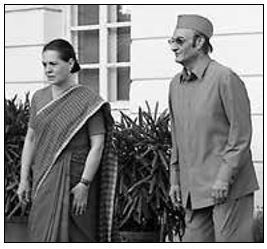 I recall the day Sonia was married to Rajiv Gandhi. Rajiv was then a pilot in the Indian Airlines which was under my ministry. He was an excellent pilot and his behavior was always exemplary. Sonia Gandhi looked exactly like a Kashmiri Pandit bridse and thereafter Asha and I had many occasions to meet with her at various functions and occasionally, over a meal at our house.

After the tragic assassination of Rajiv, Sonia behaved with great courage and dignity and for several years thereafter spent most of her time in the Rajiv Gandhi Foundation which undertook several welfare schemes, held significant international seminars and undertook the construction of a spectacular memorial at Sri Perumbudur where Rajiv had been assassinated. Through all this, she always retained her deep commitment to the Congress and followed its activities with keen interest. During the five years of PV Narasimha Rao’s prime ministership when he was also Congress President, was succeeded by Sitaram Kesari. Soon thereafter the party began to disintegrate and members from around the country began leaving. It was at this juncture that Sonia Gandhi emerged literally as the savior of the Party.

After becoming Congress President she started the difficult and laborious task of rebuilding the Congress. The first test came in the 1999 elections in which the Congress was able to win only 156 seats, but at least had regained its equilibrium. Over the next five years Sonia Gandhi was able to tackle the factionalism that is endemic in almost all political parties in India and gave a new momentum to the organization. As a result of this, in 2004 the Congress won 185 seats and was able to form the first coalition government of the United Progressive Alliance. Everyone had assumed that having led the Party to victory, Sonia herself would be the prime ministerial candidate. However, the nation was stunned when she announced that, following her inner conscience, she had decided not to occupy the seat and instead proposed the name of Dr. Manmohan Singh.

I was at the Congress Parliamentary Party meeting in the Central Hall when she announced this decision. After a shocked silence there was a furor and speaker after speaker demanded that she reconsider her decision. However, she is a woman who, once she makes up her mind, is unlikely to change it. She withstood all pressure and saw Dr. Manmohan Singh safely ensconced as Prime Minister. This act of abnegation was unique in Congress history and as a result of it Sonia’s standing in the country and around the world was greatly enhanced. I recall that over the next few years almost every Head of State or Government who met her lauded her decision.

Like Indira Gandhi, Sonia is also a good listener. She listens carefully to whatever people say to her in private, but then makes her own assessment and takes her own decision. Despite the difficulties of managing a fractious coalition, UPA-I was very successful, with the growth rate touching 9 percent. In the 2009 general elections, to everyone’s surprise the Congress won 206 seats in the Lok Sabha, marking another feather in Sonia’s cap. Despite having a lesser number of coalition partners, UPA-II had a more tempestuous term, with several full sessions of Parliament disrupted, a  number of scams unearthed and a slowing down of the growth rate in which the global financial crisis played a major role. Despite this, Sonia Gandhi’s leadership within the Party remains unchallenged and with her son Rahul having been appointed Vice-President that this remarkable family will, for many years to come, continues to lead the Congres

It is indeed quite remarkable that a young Italian woman who came into the family in 1968 should have been able to play such a central and decisive role in Indian politics. It also speaks of the strength of Indian democracy and the essential secularism of Indian civilization that in a country with an 80 percent Hindu population at one point in time, the President was a Muslim, the VicePresident a Hindu, the Prime Minister and Chief of the Army Staff Sikh and the leader of the largest political party, the Congress, a European. I can state without hesitation that nowhere else in the world could such a situation prevail. This is possible only in India because of its great civilizational values, innate pluralism and our liberal traditions.