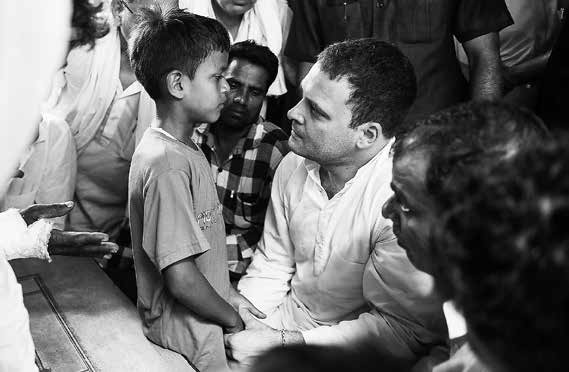 New Delhi: After being forced to cut short his visit to Saharanpur that is tense after caste clashes earlier this week, Congress Vice President Shri Rahul Gandhi took a broad swipe at the BJP at the Centre and the state. Shri Rahul Gandhi said the UP Chief Minister Yogi Adityanath government had failed on law and order front in the state, he said. Turning to Prime Minister Narendra Modi, he said there was no place for weaker sections of society in the country as well. “Everybody in country who is not powerful is scared and this is not the way to run a country,” the Congress vice president said, with UP Congress chief Raj Babbar and senior party leader Ghulam Nabi Azad by his side.

Before leaving the place for New Delhi, the Congress Vice President addressed an unplanned press conference to announce that “I am going back on administrations instructions, as soon as the problem will be solved, they will take me to the village (Mujhe administration ne kaha hai isliye main wapas ja rha hun, jaise hi yahan samasya theek hogi wo mujhe gaaon mein le jaayenge)”. The attack on the BJP’s state and central government started soon after.

“It is the duty of the Uttar Pradesh Chief Minister to protect the weak, and Chief Minister Yogi Adityanath should start doing this... and NDA government has spread fear among weaker sections all across country,” he said. On the Modi government’s completion of three years, the Congress Vice President attacked the Centre and PM Narendra Modi for failing to create the 2 crore jobs that he had promised and the spike in the violence in Jammu and Kashmir that only helped Pakistan. Jammu Kashmir is burning, we had brought peace in Kashmir, Narendra Modi ji is providing foothold to treasonists in J&K

The UP state police had denied permission to Shri Rahul Gandhi, to travel to the affected areas in Saharanpur this afternoon and declared that he would be stopped right at the border. He made it past the border, and met a Dalit delegation in the district. On Twitter, Shri Rahul Gandhi announced he had walked past the border and met some families affected in the caste clashes. The post was accompanied by two pictures; a young boy, Badal, whose family suffered in the violence, sitting on his lap as he listened to the grievances.

On 23rd May, 2107, a Dalit man was killed and several people were injured when a mob attacked supporters following a procession to mark Ambedkar Jayanti, the epicenter of clashes between Dalits and Thakurs or Rajputs since last month. More than 12 homes in the village belonging to Rajputs had been set afire by unknown people and the mob attack was seen as retaliation. Groups of Dalits then attacked shops and markets.

When the senior district officials asked Congress Vice President Shri Rahul Gandhi not to proceed any closer to the epicentre of the violence, Leader of Opposition in Rajya Sabha and AICC General Secretary Shri Ghulam Nabi Azad told him “we are law abiding people”. But one police officer’s remarks that suggested the police had done him a favour by not stopping him at the district’s borders, just as they had announced. “Under which law... under which law, would you have stopped me at the border,” Congress Vice President Shri Rahul Gandhi shot back, crossly, before relenting.