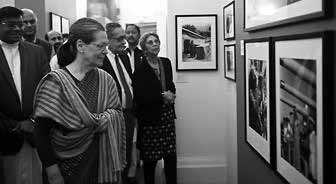 The Gandhi family came together in Allahabad at Swaraj Bhawan, where Indira Gandhi was born and also the venue for the photo exhibition that will travel to five cities over the next 12 months, finally ending in New Delhi on November 19, 2017, the day of Indira Gandhi's centenary.

It is a collection of 220 photographs from a massive 90,000 plus collection from the Indira Gandhi Memorial Trust in New Delhi with some rare and previously unseen photographs. Sonia began her speech by first expressing condolence for the victims of Kanpur train derailment. Speaking at the inauguration, Congress President Smt. Sonia Gandhi said, "To me she (Indira Gandhi) wasn't just a historic figure, she was my mother-inlaw. She was like a mother to me. It's her courage that set her apart from the others.

Calling Indira’s courage her unique quality, Smt. Sonia Gandhi mentioned how a day before her death, the former PM had said: “When I die, every drop of my blood would invigorate India and strengthen it.”

Smt. Sonia Gandhi exhorted everyone to draw inspiration from her life that was full of challenges. “The most important takeaway from this exhibition is the inspiration Indiraji’s brave and courageous life gives us. Courage was her unique quality with which she fought all adversities. We still remember her sacrifices for the sake of national unity. She lives in the hearts of people. We can draw lessons from her glorious life,” Smt. Sonia Gandhi said at Swaraj Bhavan in Allahabad.

She told Congress leaders present that adversities can be overcome. “Indiraji’s life was dedicated to the poor and the  underprivileged for whom she took personal pains. She stood by all Indians and believed in India’s diversity. She bravely fought the separatist forces that sought to divide our country. Indiraji loved the people and got their generous support in return,” said Congress President.

“Her concern was that our country should remain united and we should stand on our own feet. She wanted to make India a nation where everyone is safe, a nation in which everyone takes pride,” she further added. During the event, only Congress President spoke in front of gathering with both Rahul and Priyanka sitting in the audience. The gathering included senior leaders like party’s chief ministerial candidate Smt. Sheila Dikshit, AICC General Secretary Shri Ghulam Nabi Azad, PCC President Shri Raj Babbar, former state MPs and selected guests from Allahabad.