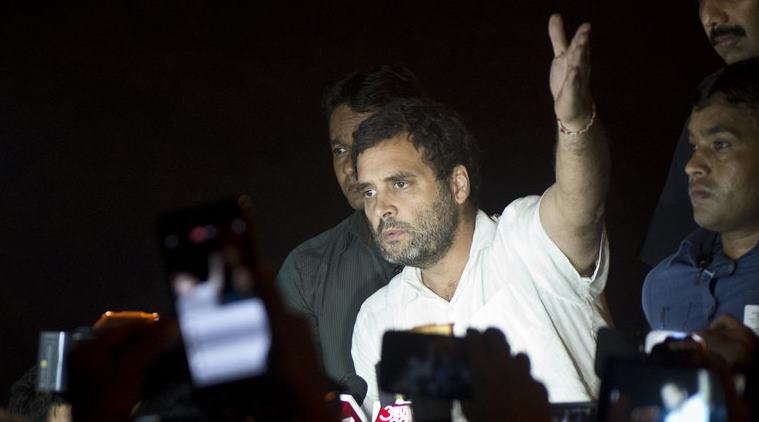 New Delhi: Suppression and cruel treatment by the Modi government of our brave soldiers and disregarding their demands has shocked the whole country. The Modi government should bow their head in shame. Subedar Ramkishan Grewal, who was of Bamla village in Bhiwani, had written a letter to the Defence Minister of India and which contained three important facts that the Subedar had served the Army and the country for 30 years, 9 months and 26 days. Despite keeping the love and prestige of the motherland above all, he did not get the benefit of the Seventh Pay Commission nor he is getting One Rank, One Pension. He said that he was not getting the increase that was made in the pension which others are getting and then wrote the marmic words on behalf of the serving soldiers he wrote that I am sacrificing my life for my country, for my motherland and for the jawans of my country and after doing so he took the extreme step. When the family of Subedar Ramkishan, his two sons, one son-in-law and his aged elder brother went to the Ram Manohar Lohia Hospital in the morning to claim his body, the Modi government even refused to tell the whereabouts of the body. The whole family, was sitting and waiting on a stone in the parking.

We just want to ask that before coming to power, Modiji had promised the soldiers in Rewari that my first job after becoming PM would be to start OROP, is this the justice you are giving to our soldiers who give their life for the country after becoming the Prime Minister.

Has the ego of power and intoxication become so heady that the Modi government does not realize the sacrifice of the soldiers and the pain of their families looks like politics and dharna?

In the AICC
Congress Vice President, Shri Rahul Gandhi met exservicemen on 4th November, 2016 Excerpts of the addressed by Congress Vice President Shri Rahul Gandhi, and Shri A.K. Antony after meeting with the ex-servicemen Shri Rahul Gandhi while addressing the Media said that exservicemen from all over the country had come to meet me and we had a fruitful discussion. They had mentioned a few things, maybe most important thing they mentioned was, they said, Rahulji this matter is not about money but it is a matter of our prestige. This is not a matter of money but a matter of justice. They also said that if the government clearly tells us that they cannot give us the money then not a single ex-serviceman of India or any single soldier of the Indian Army would say, all right, we do agree with the decision. But the truth is there was a slogan of ‘Jai Jawan, Jai Kisan’. That a loan of Rs. One Lakh Ten Thousand crores was given to 15 industrialists, but the farmers and our jawans have been denied their money. Neither the farmers are being respected nor our jawans or our ex-servicemen. The Prime Minister of India stands up and says that the OROP has been implemented, then why our ex-servicemen are sitting on a protest dharna for the past 509 days at the Jantar Mantar, why are they standing before the media? The truth is that the Indian government has not implemented the OROP. I want to say to the government that our jawans, that our ex-servicemen, wherever they are posted have given their lives for the country, have given years of service, you should respect them and fulfill their demand of one rank, one pension, it is their right which has to be fulfilled. Yesterday and day before I was detained, it does not make any difference but what I saw in front of me day before was not correct when the family of a martyr was treated, the way the child was dragged. No government, leave aside the people of the Army, should treat anyone like this. The body of their father is lying in the hospital and our government locks them up for 12 hours and then take them away quietly,

this is absolutely not done, this is altogether wrong. The government has to apologize, they should apologize to that
family and immediately implement OROP.

There were 60-70 people who met me, they were all experienced people and they made it very clear that what Narendra Modiji is saying on OROP is just pension enhancement, it is not ‘One Rank, One Pension’ and this is what every jawan of India feels, this is what every General, every Colonel, every Major and every Captain feels. Modiji you stop telling lies and start implementing the ‘One Rank, One Pension.

OROP during UPA
Shri Antony said in UPA Budget the Finance Minister announced in the Parliament that 1st April 2014 onwards “One Rank One Pension” will be introduced for the ex-servicemen. In taking the decision Shri Rahul Gandhi Ji was also a major force and inspiration for the Government. He was always requesting the Prime Minister and the Government that we must fulfill the long cherished dream of our Lakhs of ex-servicemen who sacrifice their prime youth for service of the country. Ultimately, we announced it. After that, we issued Order for the implementation of “One Rank One Pension”. The salient feature was that the Defence Forces and those ex-servicemen who were in the same Rank who served same length of service will get the same pension, whatever may be the date of retirement and this will also apply to Family Pensioners and the Disability Pensioners. This Government gave false promises and they cheated the exservicemen. Shri Rahul Gandhi’s visit to the deceased family, his attempt to go to the Hospital, this Government prevented it without any Section of Law but Shri Rahul Ji is committed to the issue, has again galvanized the genuine movement of the ex-servicemen for “One Rank One Pension”. Shri Rahul Ji is supporting them. He is always interested in the issues concerning the Armed Forces and ex-servicemen. Wherever, he goes, he is always interested in the welfare of ex-servicemen, martyrs, soldiers. So, I am sure, with the support of Shri Rahul Gandhi Ji and the support of all of us, ultimately, the “One Rank One Pension” as promised by the UPA Government, this Government will be forced to implement in toto and in letter and spirit. This is my feeling. Shri Rahul Gandhi Ji had detailed discussion with the exservicemen, heard them personally and I am sure his support will go a long way in ultimately fulfilling the promises we gave to the ex-servicemen in toto and on 14th Feb 2014 in the Parliament.