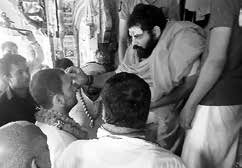 Ayodhya (UP): Shri Rahul Gandhi spent 20 minutes in Ayodhya on 9th September, 2016 morning, in the first visit to the Uttar Pradesh temple town by a member of the Congress's first family since the demolition of the Babri Masjid in December 1992.

The Congress Vice President Shri Rahul Gandhi drove straight to the famous Hanuman Garhi temple, where he offered prayers, before meeting the Mahant (top priest). He then drove straight out of town to twin city Faizabad, where he held a roadshow.

"Shri Rahul Gandhi came and sought our blessings… said Mahant Gyan Das, the temple's chief priest. Former Prime Minister Rajiv Gandhi had on a visit to Ayodhya in 1990, planned to offer prayers at the Hanuman Garhi temple, but could not because of lack of time. He was assassinated the next year.