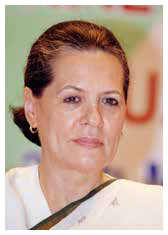 New Delhi : In a message Congress President, Smt. Sonia Gandhi has condoled the passing away of  Mr. Fidel Castro. Describing his death as a loss not limited to Cuba or a particular ideology, Smt. Gandhi said that Mr. Castro led the oppressed and the striving from the front and stood up to every attempt at stifling the voice of freedom. His contribution to the Non Aligned Movement and his unflinching support for India’s cause on various fora will always remain deeply etched in the minds and hearts of the Indian people, she added.

About Fidel alejandro Castro Ruz (American Spanish:  August 13, 1926 – November 25, 2016) was a Cuban politician and revolutionary who governed the Republic of Cuba as Prime Minister from 1959 to 1976 and then as President from 1976 to 2008. Politically a Marxist–Leninist and Cuban nationalist, he also served as the First Secretary of the Communist Party of Cuba from 1961 until 2011. Under his administration, Cuba became a one-party socialist state; industry and business were nationalized, and state socialist reforms were implemented throughout society.
Castro is a polarizing world figure. His supporters laud him as a champion of socialism and anti-imperialism whose revolutionary regime advanced economic and social justice while securing Cuba’s independence from American imperialism. Critics view him as a dictator whose administration oversaw  human-rights abuses,  the exodus of a large number of Cubans, and the impoverishment of the country’s economy. He was decorated with  various international awards  and significantly influenced various individuals and groups across the world