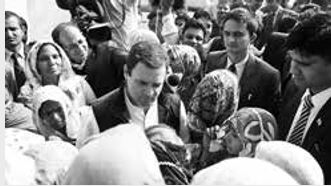 Dadri (UP): Taking his battle against the decision on demonetisation, Congress Vice President Shri Rahul Gandhi visited Dadri Mandi on 13th December, 2016 and slammed the Prime Minister Modi for “waging a war” against poor people

Addressing a crowd at the Dadri Anaj mandi (grain market), Shri Rahul Gandhi alleged that demonetisation was a means for the Modi government to waive the bad loans of the corporates using the hard-earned money of the poor.

While interacting with the local residents, Shri Rahul Gandhi said, “Modi ji wants your money to be in the banks for the maximum possible time. The reason for this is that he wants to use your hard earned money to write off bad loans of his corporate friends.”

Congress Vice President accused Prime Minister Shri Modi of the shifting goalposts since November 8 when the government demonetised the Rs. 500 and Rs. 1,000 notes.

“The Prime Minister’s narrative over demonetisation has repeatedly changed. First he pitched it as a move aimed at ending corruption and counterfeiting. But as the month progressed, the narrative seemed to have shifted towards war against terror. After a month progressed, he has started talking about digitization and making the society cashless,” further added Shri Rahul Gandhi.

Shri Rahul Gandhi said “Prime Minister Modi is talking about making the society cashless. People are suffering as they have actually gone cashless,”.   He also told the gathering that while Shri Modi pitched demonetisation as a move against black money hoarders, it was the illegal group which was “least affected”.

He raised question to the public present there “Do you see even a single rich person or black money hoarder in queue? They are having no such problem as they are taking money from back doors”.

“The government says demonetisation was against fake currency. But fake currency is only 0.02 paisa in every Rs. 100,” the Congress Vice-President told gathering. v