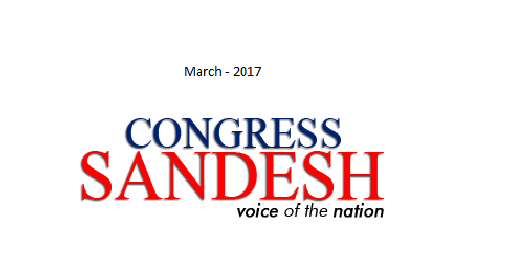 The Grand and decisive victory in the state of Punjab has come like a breath of fresh air in the horizon of the Congress party. Even in the wake of the previous state assembly election five years ago then too the Congress was all set to have formed a government, the ruling Akali-BJP combine used all kinds of means to steal a victory over the Congress. Instead of using the mandate for the benefit of the people of Punjab, the ruling combine used this opportunity for self gratification and allowed the spread of drugs which has harmed the young generation of Punjab, in a manner which is unforgiveable. Well-oiled machinery under the leadership of The PCC President along with total support of the Congress Vice President Shri Rahul Gandhi enthused the party to fight elections united and despite efforts of the AAP party and the Akali-BJP combine gave a befitting reply and had a resounding victory. Congress Vice President Shri Rahul Gandhi said ‘we congratulate Capt. Amrinder & his team for forming the Government in Punjab. We are confident they will take Punjab to new heights’. The secret of success is that the Organisation has to be clear in its intent, fight united under the leadership of the state and the central Congress leadership and have a positive view and faith in its own winability. There is no place in the country where the Congress cannot defeat the fascist forces which have raised their head strongly and are befooling people into believing that their agenda is of development but truly it is divisive and spreads communal discord.

The lust for power drove the BJP led by Modi ji and Amit Shah to forge unholy alliances and misuse the office of the Governor to form Governments at Goa and Manipur. That the office of the Governor is used as a BJP party office was seen earlier when they carried out their unholy experiment at Arunachal Pradesh and Uttrakhand. The same has been repeated at Goa and Manipur and the BJP leaders with a straight face give it the stamp of legitimacy. The set principle of inviting the single largest party to first explore the possibility of forming a government was given a go-by, by the Governors with flimsy reasoning.

In Goa, the peoples mandate was so vehemently against the BJP that its own chief minister lost the election. The numbers won by BJP were very far behind the Congress that was on the verge of the half-way mark. Congress Vice President Rahul Gandhi said ‘it is not about how soon they went, but with how much money the BJP went to steal the mandate of Goa and Manipur. Our fight with the BJP is an ideological fight. What the BJP has done in Goa & Manipur is their ideology and that is what we are fighting.”

In Manipur too, the BJP that was far behind cobbled together a majority. The members of the coalition are so diverse that there cannot be a stable Government. In a sensitive state like Manipur in the North East having a stable, able and experienced government is essential for the country.

The ruling BJP has won a mandate, which is clear in the states of Uttar Pradesh and Uttrakhand. The Congress Vice President wasted no time in offering his congratulations and support to the winning disposition. But after winning a massive mandate, the BJP showed its true colors by appointing a person whom people within their own party have called fringe. Congress was in the fray at UP along with the Samajwadi party with whom the Congress had formed an alliance. The calculations have not proven to be correct and the party will certainly introspect to identify the reasons for the loss and make sure that the loopholes are plugged for the future. Having been out of power in UP for such a long time the Congress has to re-strengthen its grass roots cadre.

Once again the dastardly act of Maoists took lives of 12 CRPF personnel on 11th March 2017. They were a part of a Road opening party and were ambushed by insurgents in Sukma District of Chhattisgarh. Congress President Smt. Sonia Gandhi described it as a “dastardly and cowardly” act. Saluting the sacrifice of the CRPF men for their “supreme sacrifices “Smt. Gandhi said that her thoughts and prayers are with the families of CRPF personnel. “India stands united in fight against terrorism and the government should give a befitting reply to the forces spreading terror in India’, she added.