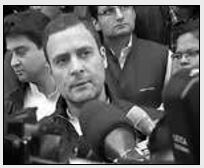 New Delhi:    Congress Vice President Shri Rahul Gandhi on 8th December, 2016 lashed out at Prime Minister Shri Narendra Modi over the scrapping of Rs. 500 and 1,000 notes, accusing him of not caring about the large-scale problems triggered by the abrupt move to curb black money and corruption.

“Farmers are dying and the Prime Minster seems to be having fun. PM should come to Parliament to debate on demonetisation, we will not let him run away,” he said.

“PM’s so-called bold demonetisation move is a foolish decision which has devastated the country,” he further added.

The opposition parties observed a ‘black day’ on 8th November 2016 to mark the one month since the decision to scrap old notes was announced by Prime Minister Narendra Modi in a bid to curb black money and corruption. While praised in principle, the demonetisation has been faulted for its implementation as the sudden move to abolish over 80 per cent of the country’s currency left millions of Indians stranded without usable money.