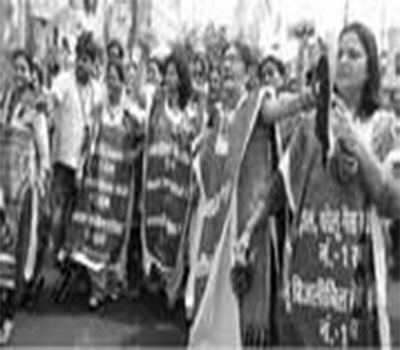 AIMC organized a Protest Demonstration at BJP Headquarters on 5th March 2016 against enforcement of tax on EPF in General Budget which was adversely effecting crores of service class people across the country. Effigy of Prime Minister Narendra Modi was also burnt. Finally the Government had to roll back the recommendation.

On 11th March 2016, AIMC held a protest against insensitive attitude of HRD Minister Smt. Smriti Irani wherein a doctor was crushed to death under a car of her cavalcade. Effigies of Prime Minister Narendra Modi and Smt. Smriti Irani were burnt in front of her house. On 29th April 2016, AIMC held a demonstration opposite BJP National Headquarters against the false allegations of the BJP Government in the case of Augusta Westland deal in which the Government is trying to implicate Congress leadership. The three-in-one effigy of Narendra Modi, Amit Shah and Subramaniam Swamy was set ablaze by the protesters.

The “International Women’s Day” was celebrated across the country by Mahila Congress units by organizing various kinds of programs with the theme ‘UDAAN’. Some of the programs were attended by AIMC President such as in Kerala, Delhi, Punjab, Maharashtra, Odisha and Karnataka. All AIMC Incharges also attended the celebrations in the States under their charge. AIMC President went to Assam from 5th April to 9th April 2016 for election campaign where she addressed huge election rallies in a number of constituencies. She went to Nagpur to attend the 125th Birth Anniversary Celebration of Dr. Bhim Rao Ambedkar organized by Shri K. Raju, Chairman, SC Department, AICC.

AIMC President led a human chain formed by Chhattisgarh PMC in protest against the consumption of excessive alcohol by men in the State on 19th April 2016.

On 9th & 10th March, organizational Meetings of Uttar Pradesh Mahila Congress were convened by President UP PMC in Lucknow which were addressed by AIMC Incharges.

The All India Mahila Congress directed all State Mahila Congress units to hold protests throughout the Country against the Undemocratic & Vindictive Actions of BJP Government in the centre on 4th April. All State units organized this program in a big way at State and District levels.

Mahila Congress Conventions were held in Delhi on 4th & 24th April; Saraikelan and Singhbhum Districts, Jharkhand on 9th & 11th April; Jammu on 10th April; Fatehgarh Sahib, Jalandhar, and Amritsar Districts, Punjab on 18th, 19th & 20th April respectively. All the conventions were attended by the AIMC Incharges of the concerned States.

Odisha PMC organized marches towards collector office in each district of Odisha against potable water scarcity in the State on 11th April 2016. Goa PMC held a demonstration against the misrule of BJP led Central and State Government.

125th Birth Anniversary of Dr. Bhim Rao Ambedkar was celebrated by Mahila Congress in every district across the country on 14th April 2016. Various kinds of programs were organized on this occasion.

On 21st April, Uttar Pradesh Mahila Congress held a meeting of Mahila Incharges of 18 Divisions to take a stock of the organizational activities in districts under their charge. On 22nd April Shri Prashant Kishore, election strategist, appointed by the AICC for Uttar Pradesh Assembly Elections, convened a meeting of entire Mahila Congress organization of Uttar Pradesh to invite suggestions regarding success of the Party in forthcoming Assembly Elections early next year.

In order to create awareness on severe water crises in Gujarat, Mahila Congress is participating in Pani Yatras held in 14 different locations across the State. Though the program is organized by and held under the umbrella of Gujarat PCC, Mahila Congress registered its presence with great enthusiasm.

Odisha PMC held a protest rally against chit fund scam in the State in which hundreds of people were cheated and consequently lost their money. Chandigarh Mahila Congress held protest against BJP for the shortage of Water in the city.