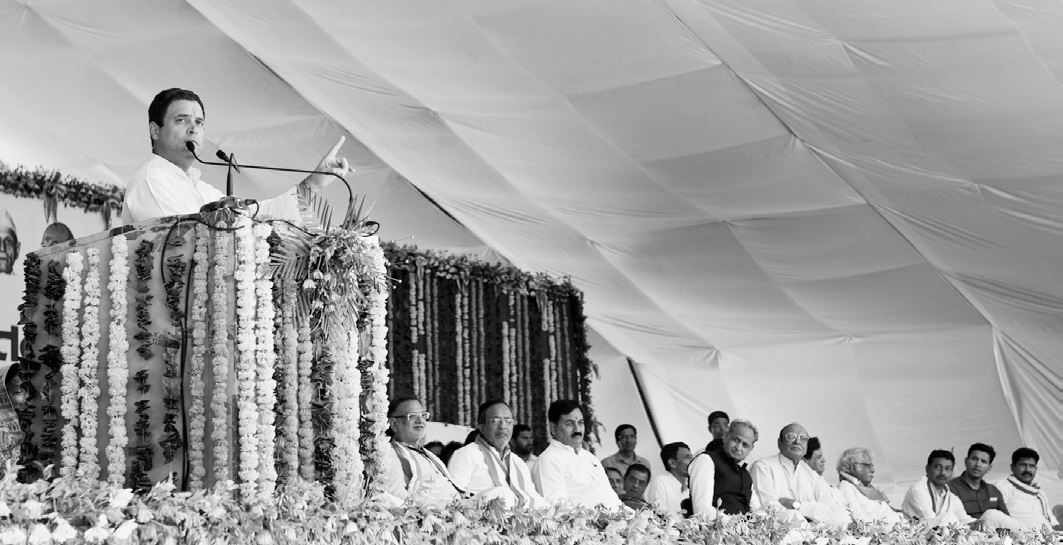 New Delhi: Congress vice-president Shri Rahul, addressing a massive Congress Workers’ Convention, organized by the Delhi Pradesh Congress Committee at the Ramlila Maidan on 7th March, 2017, said the Congress party’s ideology is different from that of the RSS, the BJP and other political parties. Shri Rahul Gandhi said Congress party’s ideology is the ideology of the people because Congress knows well that each citizen of the country has experience and knowledge. He said the Congress governments identify the voice of each citizen. He said the Congress party runs Governments after listening to people’s opinion. Shri Rahul Gandhi said in the Aam Aadmi Party, Kejriwal is the king of the party and only his voice prevails, while in BJP, Shri Narendra Modi’s words are final, and they don’t listen to the opinion of others.

Shri Rahul Gandhi said two and a half years ago, Modiji had gone to Banaras and he had said that ’Ganga Mayya’ had called him. Shri Gandhi said Ganga Mayya is the mother of whole of India, and not the mother of an individual alone. He said Shri Narendra Modi makes false promises. Shri Modi had said that in the account of each citizen, Rs 15 lakh would be deposited. Shri Modi had also promised that employment would be given to two crore youth, and would clean up the Ganga river. Shri Rahul Gandhi further said that Modiji has been in power for over two and a half years, but none of his promises have been fulfilled. Shri Rahul Gandhi said the youth of the country wants to see the country move forward, and they want employment. Shri Rahul Gandhi wanted to ask Modi, how many jobs have been created by “the Babbar Sher of Make in India” for the youth of the country. He said a Minister of the Modi Government had said in Parliament that only one lakh jobs have been created so far.

Shri Rahul Gandhi said the Congress party will give opportunity to fresh faces and give tickets to those who work out at the grassroot level, and those who come out on the streets to work for the party, and not for those who land on parachutes. He said Congress workers will select the Councillors, MLAs and Chief Minister. Shri Rahul Gandhi said in the Municipal Corporations of Delhi and in the Delhi Assembly, the voice of the people will be heard. He said the works done by the Congress Government in Delhi for the past 15 years still remains the benchmark as nothing more has been done since then, and under the Congress rule, kids did not die due to dengue. He said Arvind Kejriwal practices politics of lies and falsehood. Shri Rahul Gandhi, taking the example of the demonetization drive carried out by Shri Narendra Modi, said did any black money holder was seen standing in queues before banks and ATMs? Only the poor and labourers were seen standing before banks and ATMs.

Shri Rahul Gandhi said Indians are being killed in foreign countries, but Modiji has been keeping silent. Shri Rahul Gandhi appealed to the Congress workers that they should confidently face the AAP and the BJP, and should come out on the streets to fight for the issues of the people and also to raise their voices.

Addressing the Congress workers, DPCC president Shri Ajay Maken said today’s Workers’ Convention at the Ramlila Maidan was a historic one because the Ramlila Maidan itself is a historic venue. He said it may be recalled that Shri Anna Hazare talked about Jan Lokpal from this venue, and on the dais were people like Kejriwal, V.K. Singh and Kiran Bedi. He said the Congress party in 2014 had passed the Lokpal Bill, and three years have elapsed since then, but the BJP-ruled Central Government has not implemented Lokpal, nor has Kejriwal made the Jan Lokpal in Delhi. Shri Maken said Kejriwal had promised that within one month after coming to power, the Jan Lokpal will be passed at a special session and implemented. He said had Jan Lokpal been there in Delhi, many AAP Ministers and MLAs would have been caught. He said four Ministers of the AAP have been accused of corruption, and three Ministers had to lose their Ministerships, and a fourth minister is on his way out.

Shri Maken said on the one hand, the Kejriwal Government raised the salaries of his ministers and MLAs by 400 per cent in the first year itself which works out to Rs. 36 lakhs per year. Along with this, the MLAs were also sanctioned Rs 12 lakh for buying cars and Rs. 3 lakh per year as travel allowance. He said it was very unfortunate that Kejriwal did not have money to pay the wages and arrears of the sanitation workers, nor has Kejriwal funds to pay the pensions of old people, widows and handicapped people. He said the dues of the sanitation workers have mounted to Rs 1553 crore and they had to strike five times for their wages. He said the East Delhi Municipal Corporation has not paid pension for the past 44 months, while North Delhi MC and South Delhi MC have not paid pensions for the past 27 and 20 months, respectively, to old people, widows and handicapped.

Shri Maken said Rahul Ji has always come to the aid of street vendors and sanitation workers and fought their battle on the streets. He said Shri Rahul Gandhi had joined the dharna of the sanitation workers under searing heat of 45 degrees to raise their voice when they struck work to get their salaries. He said when clothes bazaar of Gujarati traders and JJ clusters at Shakurbasti were being removed, Shri Rahul Gandhi had rushed to the spots to help them. Shri Maken said the Congress workers, in the last two years, had come out on the streets to fight many issues affecting the people, and raised the problems of the people time and again. He said the people of Delhi want Congress back in power as they have seen the maladministration of the AAP Government in Delhi and the BJP misrule in the MCDs. Shri Maken said that the people want the Congress back in power was evident from the bye-elections to the MCDs in May, 2016 when they elected Congress candidates from 5 out of 13 wards, as in this election, the vote percentage of the Congress went up to 29 per cent from the previous 9 per cent.