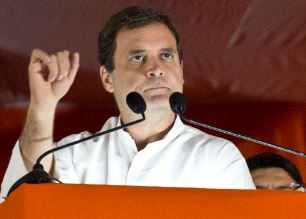 The prime minister in the Rajya Sabha commented on former Prime Minister during Motion of Thanks, which infuriated the Congress and led to a series of Opposition walkouts.

Congress Vice President Shri Rahul Gandhi in his campaign said that when Modi became the PM, he got “full majority”. “People had faith,” “different promises were made.” “You spoke about 2 crore employment…you spoke about Make in India but nothing happened,” Shri Rahul Gandhi said, “Aap khokhle ho Modiji, you only speak. And when you speak about a person like Manmohan Singhji, you do not even speak with respect.

Targeting the Prime Minister, Shri Rahul Gandhi said that while Modi said there is a lot of money in Switzerland banks, “I want to ask him - why you have not presented the names of those thieves in Lok Sabha and Rajya Sabha”.

HARIDWAR, UTTARAKHAND:    Congress Vice President Shri Rahul Gandhi’s roadshow in Uttarakhand’s Haridwar on 12th February, 2017 saw scores of BJP supporters waving party’s flags with image of lotus along the route taken by the Congress Vice President. They did not go unnoticed as Shri Rahul Gandhi acknowledged their presence, saying “my BJP friends have also come to listen to me”. “I welcome them from my heart. They have come here today to greet me,” the Congress leader said.

Haridwar (rural), one of the two seats being contested by Chief Minister Harish Rawat, is also located in the district.

Shri Rahul Gandhi had said PM Modi “mocks the tragedy of Uttarakhand and insults the freedom struggle, but has no answers to opposition questions.” Uttarakhand was hit by an earthquake on February 7.

The roadshow carried through Bhagawanpur, Jhaberda, Roorkee and Haridwar city. Congress Vice President roadshow started from the Haridwar Railway station to Har Ki Pauri with a huge cavalcade of bikers, motorists and drummers.

Uttarakhand will go to vote on February 15 and the results will be out on March 11 along with other four poll-bound states. Uttarakhand is the only one where there is a direct fight between the Congress and BJP. Uttarakhand goes to elections on February 15, 2017 in single phase. Voters will select representatives to its 70-member Vidhan Sabha.