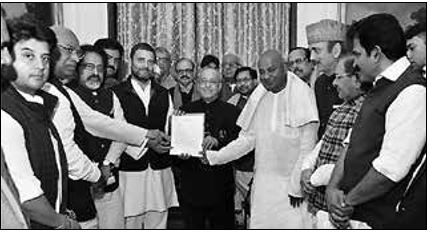 New Delhi: Stepping up its attack on the government over the Income Tax Amendment Bill, a united opposition on 1st December, 2016 petitioned President Shri Pranab Mukherjee against it, alleging that the legislation was hurriedly passed in Lok Sabha, bypassing parliamentary rules and procedures.

The opposition parties, including Congress, TMC, Left, SP, BSP, DMK, JMM, NCP and others met the President at Rashtrapati Bhavan and handed over a memorandum alleging that a “brute and authoritarian” government was “stifling” the democratic process.

The memorandum stated that ‘On 29th November, 2016, the Bill was passed in Lok Sabha without discussion. Members of Lok Sabha had given 11 notices of amendments to the Bill of which 7 required Presidential assent. We were not allowed to move these 7 amendments as the recommendation to the President Under Rule 81 of the Rules of Procedure of Lok Sabha, had not been reportedly received. It is also mandatory Under Rule 82, that the Minister shall inform the House in writing whether the recommendation of the President for moving amendments is given, withheld or rejected. The mandatory provision of the Constitution of India and the Rules of Procedure are being totally violated in passing this Bill. Though the members of the Lok Sabha, raised these issues in the House, the legitimate democratic rights of the Members were denied on the ground that the Bill being very important and urgent and there was no time to wait for the President’s assent. There is no provision for dispensation of the requirement of President’s assent under the veil of any grounds. This is not permissible in law and which amounts to undermining the authority of the President of India.

Any legislation, especially one such as this that not only relates to taxation but also involves the issue of eliminating the scourge of Black Money, demands a detailed and thorough discussion in both the Houses of Parliament. The members of the Lok Sabha, reiterate that we are extremely keen to discuss and debate the Bill, bringing forth our objections constructive suggestions and amendments to make this an effective legislation. The Government for reasons beyond our comprehension, passed this Bill without affording opportunity and depriving our democratic rights and privileges as Members of the House; a travesty to the principles of democracy.

Hence, we appeal to you as the custodian and protector of the Constitution to intervene at this juncture, as the democratic rights of the members of Parliament are being trampled upon by a brute and authoritarian Government that is hell bent upon stifling the democratic and legislative process of our Parliament.’