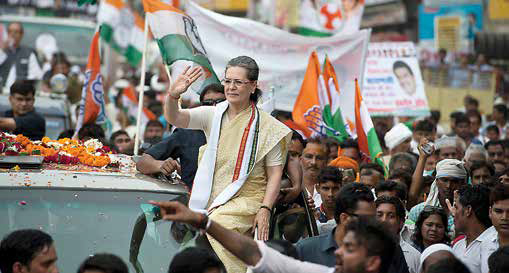 Congress President Smt. Sonia Gandhi anchored out a road show in the Prime Minister Narendra Modi’s parliamentary constituency of Varanasi in Uttar Pradesh on 2nd August, 2016. The event follows a road show and Congress Vice-President Rahul Gandhi’s rally in that state, marking the beginning of the party’s election campaign ahead of Assembly elections scheduled for 2017.

This is her first visit to Varanasi in a decade. Congress’ social media team has also been running a campaign called ‘Dard-e-Banaras’ trying to highlight problems faced by various communities even after two years of Modi’s rule. This is also seen as an attempt to sully BJP’s face in UP elections as the party has not yet declared any chief ministerial candidate.

Sonia Gandhi’s roadshow is evidently an attempt to challenge the works done by PM Modi in his Lok Sabha constituency in the last two years. Congress President Smt. Sonia Gandhi spent around eight hours in Varanasi for her roadshow and was scheduled to visit the famous Kashi Vishwanath temple to conclude her visit. Here is the full itinerary of her visit:

Smt. Sonia Gandhi left Delhi for Varanasi’s Babatpur airport at around 11 am and straight away left for Circuit House via Tarna, Gilat Bazar. The cavalcade of more than 15,000 bikers escorted her while traveling from airport to Circuit House.

She took communal harmony meeting with the religious leaders at the circuit house. After a brief halt and tea break at the Circuit House, her 6.4 km long roadshow will commence at 1:00 pm and will culminate at Kamlapathi Tripathi Smarak at around 3:00 pm.

At 5:45 pm, she was scheduled to leave for Kashi Vishwanath Temple for darshan and then address the media after that. After addressing the media, Smt. Gandhi traveled back to Babatpur Airport and took a flight for Delhi at 7 pm. Smt. Sonia Gandhi’s roadshow in Varanasi: Key Highlights Congress President Smt. Sonia Gandhi launched her party’s poll campaign with a bang for the Uttar Pradesh assembly elections with a roadshow in Varanasi. However, she had to leave the roadshow midway after she developed a very high fever. Here are the highlights of the roadshow:

• The Congress managed to put up an impressive show during Varanasi roadshow that kick-started the party’s campaign for the 2017 Assembly elections in Uttar Pradesh.

• Statue of Ambedkar garlanded before beginning the roadshow Smt. Sonia Gandhi’s started the roadshow after garlanding the statue of BR Ambedkar at the Circuit House. She initially travelled in a car and later moved to a open air vehicle. Smt. Sonia Gandhi waved at the cheering crowd and raised slogans against the Modi government.

• Smt Sonia Gandhi gets impressive response During the roadshow, Congress President Smt. Sonia Gandhi came out of her vehicle several times to reciprocate the greetings of the over-excited cheering supporters, including groups of Muslim women. As the road show passed through several localities, rose petals were showered on Gandhi and her cavalcade from adjoining buildings all along.