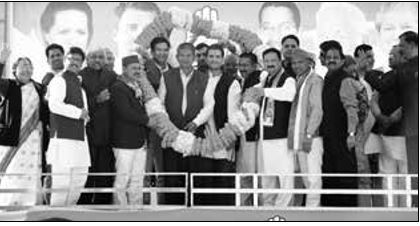 How the story of an engrossing development is scripted by the government under Congress is exemplified by the all round development by the Uttarakhand government under Harish Rawat’s leadership. Today, Uttarakhand state is established as the ‘model state’ among the hilly states alongwith being the state with fast-growing economy, which is borne out by the surveys conducted by different agencies. The state, formed on the issue of migration and unemployment, is ahead of the national tally of per capita income. The outstanding work of developing the villages growth on model alongside the cities has been done and during the last five years more than 2500 industries have been set up.

Uttarakhand happens to be at the third position in the country in the realm of electricity where it is being supplied round the clock at the cheapest price.

The Congress government had started the construction of 1308 roads and many fly overs have already been completed in this second year itself.

Two  ultra-modern international stadia have already been built up and is geared up to not the national sports tournament to be in 2018.

The upgradation of medical college alongwith the high schools and junior level schools have already been done.

In a massive recruitment drive, vacancies for 30,000 youths already has been published out of which the recruitment process for 16000 jobs is already under way while for the rest of 14000, requisition has have been demanded.

By launching of campaign to fill the vacancies under quotas of SC/ST and OBC are being filled.

The metro-rail projecting Dehradun-Haridwar-RoorkieRhishikesh with total length of 100 KMS, has been okayed and for further expansion, a 84 KM long stretch has already been earmarked. This will be the country’s largest project to be accomplished in one phase.

Uttarakhand is a leading state of India in giving pensions to people of different categories. Before Congress government, 1.74 lakh people were getting pension, it has grown to 7 lakh 25 thousand now while the government has set the target of 10 lakh people.

A new ray of hope and self-confidence has been to bring the people of the state, watching the works of mass utilities and issues of common welfare being addressed to by the Congress government under Harish Rawat’s stewardship that confirm to the principle of growth of a hilly state. The Chief Minister has opened up the avenues for employment for the rural masses and focused the possibilities of developments around Gaad-Gathere, Gahot-Galanal, Gandui Gethi and Godwa-Gaderi as per the concept of a this state.

The ideal of development with popular participation by keeping people wedded to the traditional assumptions has been achieved. The government prepared various programmes based on the principle of “Hito Pahad Hito Gaon (Hit the hill, hit the village) through which the discrepancies in the fundamental structures in the remote corners were minimized. The CM’s plan of “My village, My Roads” has filled the people with self-confidence in this direction.

The pension of total 7532 of the agitationists has been restored who fought for the separate Uttarakhand state, has already been sent. The total values of the gesture is Rs. 40 crores 95 thousand and 2 hundred rupees only.

The agitationist during their fight for separate Uttarakhand state had envisaged Garrison, to be the centre and capital of the new state. For the first time, in the government has taken a concrete move and developed structural facilities at the Bharan-Risoin in which the assembly building, MLA’s hostel and roads have already been made and the foundation stone for the secretariat already has been laid down.

The foundation for different planning under Garrison development council has already been laid with the investment of 47 crores and it has been linked with air services for the purpose of development of remote areas.

The works to bring back the economy and tourism ravaged, by natural disaster were started on a war-footing and completed in a record time due to which around 21 lakh devotees visited the four pilgrimages and had darshan.

The Kedarnath tour, undertaken by Congress vice-president, Shri Rahul Gandhi also gave the message of safe and simple Uttarakhand to the world.

The state government got the important religious journeys like tour pilgrimages to Ardhkumbh, Nanda, Rajjath and Kawad has been completed peacefully without any support of the central government. More than this, the number of permanent structure for Ardhkumbh was doubled in comparison to the last Kumbh.

In the face of growing popularity of the Harish Rawat’s government and its development works and its return to power with thumping victory against the BJP government, the centre which fostered decision in the party and tried to destabilize the party by splitting congress leaders to leave the party. Finally its conspired to get the Congress Party removed from power, which led the massive agitation by the Congress workers who took to streets against the central government’s design. The battle ended after victory when the Hon’ble Supreme Court ordered the restoration of power to the Congress Party by holding the floor test.

This process created a public uproar against the Union government and unleashed a wave of sympathy in favour of Harish Rawat. It is due to this reason that the Congress Party is once again poised to return to power after this assembly elections.

In this state, the government and the organization worked in tandem with each other under the leadership of Harish Rawat and Kishore Upadhyay that has ensured tremendous development works and this has been the reason due to which the Congress has won all the assembly by-polls and other elections.

At the time when progress of the country are finding life difficult to live due to sky-rocketing prices due to the policies of the central government. The state government is providing meals for Rs. 20 under the scheme, named after former Prime Minister Indira Gandhi, called Amma Bhojanalay. Not only this, Uttarakhand has become the only state that is providing financial assistance to women from pregnancy to old age.

The way Congress vice-president Rahul Gandhi accelerated the pace of development by showing keen personal interest after the natural disaster-ravaged state by personally touring the site of disaster, has been highly appreciable. It was because of his ability to strike a personal rapport with youths and the people of remote areas that massive crowd throng to the rallies today to be addressed by Rahul Gandhi. His public rally of Almora has been the biggest one, so far. Then it is easily understandable why there has been a wave in favour of the Congress Party and why the State is once again seems to be destined to be returned to power after the elections results are declared.

There is a wide-ranging anger due to demonetization done to benefit a few of the Corporate Houses, the reality of Jumla coming to the fore and the failures of the central government. The works done by Congress workers under the leadership of Kishore Upadhyay at the instruction of Rahul Gandhi with a view to provide support to common masses reeling under the impact of demonetization has wide-ranging impacts. This is the reason why a thumping victory of the Congress Party in the assembly election is predicted and undoubtedly it would play a pivotal role during 2019 Lok Sabha election that would catapult the Congress Party to power at the centre under the leadership of Shri Rahul Gandhi.