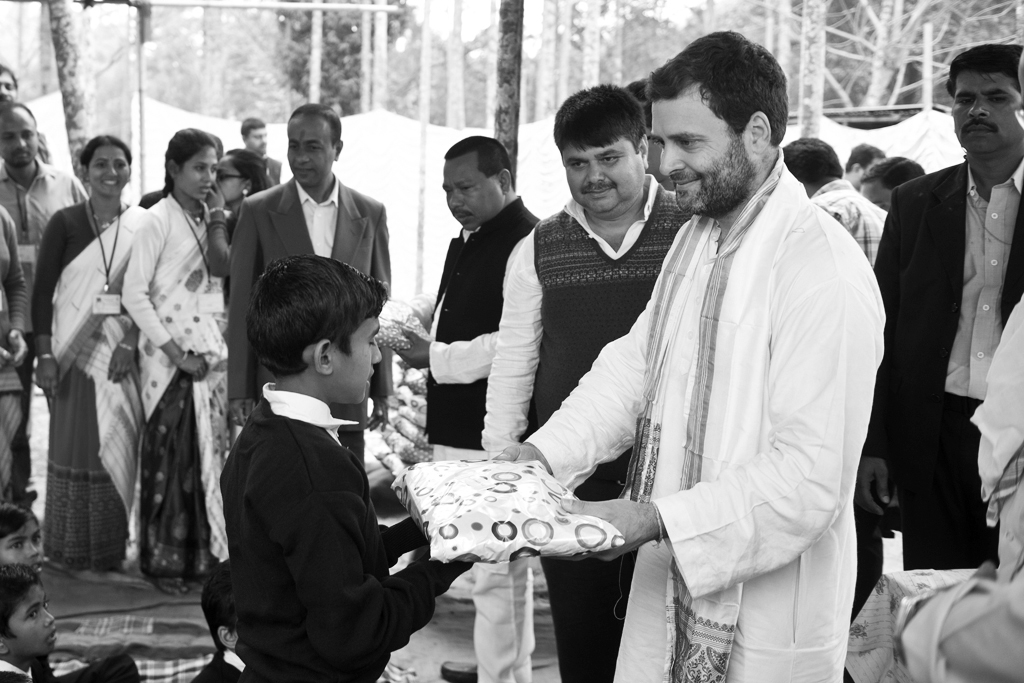 BARPETA (ASSAM): Congress Vice President Rahul Gandhi on 12th December, 2015 accused Prime Minister Narendra Modi of only making empty poll promises and creating differences between people in a bid to win elections. Shri Rahul Gandhi also took a dig at Prime Minister Modi over the defeat in the Bihar polls and asked the people to unite against the Bharatiya Janata Party (BJP). “One year ago, Modi came to Assam and made big promises. He said whatever came to his mind, that he will bring black money back and put Rs 15 lakh in each Indian’s bank account, give employment to the crores of youths in the country. “People laugh at his promises. Before polls, he makes one Indian fight with another Indian and then tries to win the elections. Before elections, some trouble is always created because if people are united, BJP can never win,” the Congress Vice President said. Slamming BJP, Shri Gandhi said that the party has “only one card — pitting brother against brother”. Referring to the Bihar Assembly elections, the Congress leader said, “Modi went to Bihar and made promises about bringing development there... made empty promises. “When people of Bihar saw and heard him, they said ‘Modi you go back to Delhi. Your hollow promises, your lies we accepted once, but we are alert people, we will not be influenced by you for the second time’.

“The people gave such a drubbing in the Bihar elections that Modi now does not sit in Parliament the way he used to earlier, looking upwards with his chest swollen.” Asking Congress leaders and workers in the state to gear up for the upcoming Assembly elections, he said, “It is very easy to make promises. Modi will come, will make empty promises. “Ask him in public meetings what happened to the special status, under which money was sent by UPA government to Assam and northeast region, your poll promises, where is the Rs 15 lakh you had promised to give us. He will return to Delhi.” “Modi wants to weaken the poor, he wants to make a government of two/three chosen industrialists, he wants to sell the country to two/three industrialists,” he added. He said that Congress wants to make “the poor, labourers and farmers strong as we understand that it is them and the youth who make India. This is the difference between us and them (BJP)”. At the public meeting held in the minority-dominated AIUDF bastion, Rahul Gandhi also spoke about the achievements of the Tarun Gogoi-led Congress government in Assam in the last 15 years.
He said that “15 years back, there was violence in Assam when people were killed, mothers and sisters cried, tears flowed, there was bloodbath. “When there is violence there can be no development. When there is anger, schools cannot function. People cannot get jobs and progress cannot take place. Gogoi and Congress brought peace and brotherhood back to Assam.” He said that Congress works for “uniting Assam and joining Hindus with Muslims, connecting one Assamese with another”. “For 15 years we have done this, and Assam has forged forward and progressed,” he said, adding that a leading magazine has put Gogoi’s Assam in number one position on matters of road, bridge construction and infrastructure development. “Tarun Gogoi has linked 30 lakh women with bank accounts, put money in their pockets. This is not done through promises.
Such work is done through sweat and takes years. Gogoi and Congress have done this in Assam,” said Shri Gandhi. Stating that the Congress-led UPA government had brought in MGNREGA for the poor, he said, “Farmers came to us and asked us to open bank doors for them also, as was done for big industrialists. “The poor farmers toil in the fields and then they are chased out of the banks. Congress gave Food Security Bill, MGNREGA, land to adivasis in tribal belts, farmers’ rights in the land Bill. And then Modi came and attempts are being made to finish MGNREGA, the land acquisition Bill that we amended”, he said. Exhorting Congress leaders and workers to unitedly contest the upcoming Assembly polls, Shri Rahul Gandhi said, “If you work for uniting the farmers of Assam and emotionally connect with the people, then what happened in Bihar is about to happen in Assam.
“There is election here and Congress has to win the election. Gogoi, (Assam Congress) president Anjan Dutta and other Congress leaders are here, fight with all your might, show BJP what is the meaning of Congress party, its workers and the people of Assam.