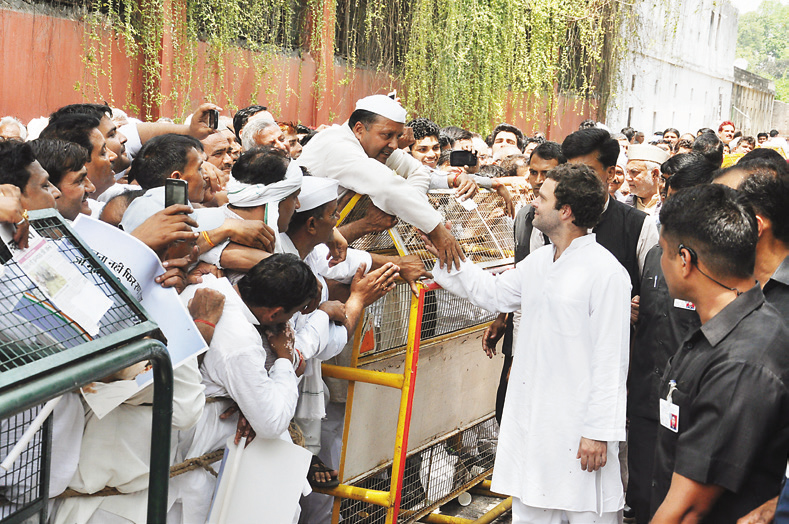 Farmers had started thronging to meet Shri Rahul Gandhi from early morning itself. Some were carrying destroyed food grains including blackened wheat crop while others were carrying photographs and painful stories of acute farmers distress resulting on account of callous and anti-farmer policies of Modi Government. Each one shared their agony, anguish and the pitiable condition of farming community. Shri Gandhi first held a meeting with leaders of farmer’s delegations from UP, Rajasthan, Delhi, Haryana, Punjab along with the respective PCC Presidents and General Secretary Incharges and then interacted with the farmers at length.
Farmers and landless labourers told Shri Rahul Gandhi about Modi Government’s complete apathy in procuring Rabi crops, particularly wheat. They opened their heart and told Rahul ji the fact that while wheat and other Rabi crops are lying in open in grain markets, Government is not procuring the same at the Minimum Support Price of Rs. 1450/- per quintal on the plea that crop had moisture content over 14% as also that farmer’s crop had either shriveled or shrunk or got blackened on account of incessant rains and hailstorms. Farmers also poured their heart out against the criminal negligence of Modi Government and State governments in not giving compensation pointing out that over 200 lakh hectares of Rabi crop had been completely destroyed in 14 different States. The issue of a minimal increase of MSP for Rabi and Kharif procurement by Rs. 50/- had led to a situation where the farmer had not even been able to meet his cost of production was also raised by them. All the farmers were vocal and unanimous in their resolve to oppose the draconian Land Acquisition Ordinance of Modi Government which seeks to snatch away their land, their livelihood and their life.
They pleaded with Congress Vice-President to carry on the fight that he took up to Bhatta Parsaul, UP, which led to passing of the revolutionary Right to Fair Compensation Act, 2013 and soul-spirit of which was being decimated by the current BJP Government. Shri Rahul Gandhi received their blessings, their affection and their support with gratitude and thanked them. Congress Vice-President assured them that pain, suffering and anguish of the entire farming community are closest to his heart as also that Indian National Congress stands with the entire farming community in this hour of unprecedented calamity and Government driven crisis.
Finding a solution and taking up this fight would be first agenda of Indian National Congress, Shri Rahul Gandhi told them. Congress Vice-President also assured the delegations of farmers that he and the Congress Party will lead a decisive fight inside and outside Parliament and will take it to a logical conclusion. Congress Vice- President called upon for farmers present as also lakhs of farmers and landless labourers to come to Ramlila Ground tomorrow to participate and lend their voice to the mass struggle for finding a decisive solution.