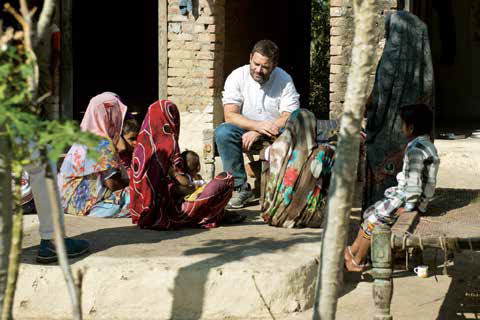 The Modi Government has now coined a new definition to the words nationalist, patriot or for that matter tolerant. Anyone who does not subscribe to the ideology of the RSS or the Modi Government and dares to voice dissent is now anti national, un-patriotic and Intolerant who must leave this country to find home in the neighboring country. It is now a pre condition to a peaceful life in India to be a faithful follower of the RSS or Modi government. It is in this context that we strongly condemn the barbaric attack on Journalists and Students within the precincts of the Patiala House Court complex. The Delhi police chose to stand by as mute spectators and refused to stop the perpetrators of the violence, while people were being mercilessly beaten in broad daylight. The Congress Vice President Rahul Gandhi visited the JNU campus to express his solidarity with the genuine students of the university.

While condemning the voicing of anti India slogans by a motely group of youngsters some of whom may not even have been students, Rahul ji said he does not need lessons in nationalism from the BJP and the RSS as it was in his blood. It was not for the government to muzzle the voice of dissent in our campuses by use of brutal force and instead should allow the voicing of divergent opinion in our vibrant democracy. The level of intolerance has breached all levels of decency when a BJP legislator from Rajasthan has called for Sh. Rahul Gandhi to be hanged or shot for going to the JNU calling his visit anti national. Rahul Gandhi needs no certificate of Nationalism nor does the Congress party need such a certificate from BJP or RSS. The contribution of the Nehru –Gandhi family in the freedom struggle the assassination of two members of the family, Indira Gandhi and Rajiv Gandhi, are known to everyone.
Such remarks against the Vice President of the Grand Old Party which fought for the independence, scarified many lives and has govern India for almost six decades is in very bad taste and the BJP led Rajasthan Government must take immediate legal action as well as expel this MLA from the assembly.. It is that time of the year when the incumbent government sets the agenda for how it proposes to manage the fiscal health of the country by presenting the yearly budget. The Indian economy is in shambles and exports have declined for 14 months in a row. Despite gloating on figures of growth in economy the real position on the ground is different. Business is showing a downward trend the value of Rupee is fast devaluating and a spirit of gloom is falling on the populace. The government doesn’t know what to do despite having the benefit of highly lowered international crude prices. The loss that the Banking industry is experiencing is also due to the sad state of the economy. The values of the shares of the banking sector have fallen to almost 50 per cent reducing the viability of the banks. The write offs of bad debts has reached alarming proportions in the last two years. The key issues of economy remain unaddressed and we sincerely hope that the finance minister touches relevant issues instead of making cosmetic announcements and more promises, for which this government is known.
The revelations about the real estate dealings, of the daughter of the chief minister of the home state of the Prime Minister and the BJP President, Gujarat. is drawing a lot of dissatisfaction and raised eyebrows. Precious land in non-conforming eco zone has been allotted to the people intrinsically linked to the lady in question. The PM who voices his "Mann ki Baat" every month has not said a word on such a serious matter. As it is, the PM chooses to remain silent on all relevant issues and has chosen to do so once again. Whether it be JNU or Patiala House Court or Gujarat etc. etc. he has decided not to voice his opinion. It is time the PM addressed the nation on real issues. The continuous attacks on our establishments on the border have increased alarmingly. There has been loss of precious lives both of our forces personnel as well as the civilian population. There is clearly some inadequacy in maintaining of the border posts and the government needs to apply its mind as to what steps need to be taken to stop such infiltration.