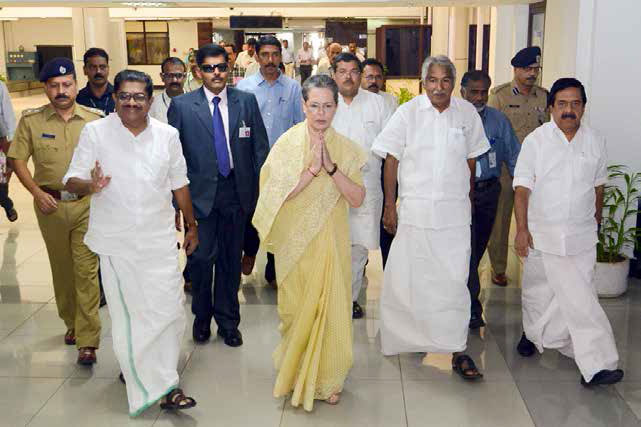 Soon after the unplanned visit of the Prime Minister to visit the Pak Prime Minister Nawaz Sharif on the occasion of his birthday and the engagement of his granddaughter terrorists from Pakistan made a dastardly attack on our air base at Pathankot, with a view to cause havoc to our air equipment including our airplanes stationed at the air base. Whereas the Indian intelligence agencies were forewarned of a strong possibility of such an attack we were unable to prevent the entry of 6 terrorists laced with heavy and sophisticated equipment with loads of ammunition. Clearly it was laxity in security that caused us to lose the precious lives of 6 airmen and a commissioned officer. Our brave forces defended our important air equipment and planes but at the cost of precious lives of young and brave officers who had a life ahead of them for themselves and their families.

It showed that the preparations needed to be more through and there is a need to introspect and fix responsibility so that such incidents can be prevented in the future As a result the nation was up in arms questioning the bonhomie between Prime Minister Modi and Shri Nawaz Sharif and questioning the control that Prime Minister Sharif has on the intent of inimical forces in Pakistan. The various flip flops and the earlier claims of the BJP which have now proved to be only posturing have confused the nation and especially the political parties as to whether the BJP does have a planned strategy towards our neighbours. The relations with Nepal too are currently not at the best. Finally the planned talks on 15th January were put into abeyance and the nation again wondered whether the impetuous act of the PM had led actually to a step back vis a vis the relations with Pakistan. The Congress has always believed that the only way forward to sort out problems is to talk on contentious issues. But this strategy is surely going to create further insecurity on both sides and the militants in Pakistan who are not interested in good relations will succeed in their nefarious designs.
A major earthquake with a magnitude of 6.7 on the Richter scale rocked the Eastern and North Eastern parts of India early morning on 4th January 2016.At least 2 persons in Assam and 21 in Manipur died. 20 persons in Assam and 297 people in Manipur were injured besides causing loss to valuable assets and property. Both The Congress President Smt. Sonia Gandhi and the Vice President Rahul Gandhi condoled the loss of life and offered their prayers for those affected by this event. The Congress President asked the Chief Ministers of the region to ensure immediate relief and rescue operations. The Congress Organisation was asked to gear up to provide assistance to the affected people. The results of the local body elections in Gujarat as well as in Manipur should come as an eye opener to the BJP. The results which are great gains for a resurgent Congress have been a blow to the performance of the Modi Government especially in the home state of both the PM and the BJP President. Elections to 323 local bodies were held. In a virtual role reversal the Congress walked away with 132 taluka panchayat bodies while the BJP was successful in 73. It bagged 21 of the 31 district panchayats. In Manipur elections were held to elect 278 councilors and 586 nagar panchayat members.
Of the 278 municipal council seats in the results announced so far the Congress won 108 seats as against 62 of the BJP. The people have started seeing through the empty rhetoric of the BJP and more so of the non-performing government of Prime Minister Modi. The way people were influenced by his promises in Lok Sabha has now started showing in the frustration of the people. The nation pays its homage to the Father of the Nation Mahatma Gandhi on his 69th martyrdom day. The teachings of the Mahatma have become more relevant in the strife torn world where militancy is being used to convey points of view, the message of peace and harmony preached by him is more relevant and we need to follow in his footsteps to save humanity from total annihilation at the hands of misguided people. The nation also remembers with affection on his 119th Birth Anniversary Subhash Chander Bose popularly remembered as Netaji who braved the Imperial Might and led with the army of brave freedom fighters ‘The Indian National Army’ in the war for the freedom of India.
The Congress President Smt. Sonia Gandhi paying her respects said remembring the role-played by Neta ji, one of the greatest sons of India, Smt. Gandhi recalled with gratitude that the Nation as indeed the Congress Party can never forget his contribution to the national struggle for freedom for founding of an independent democratic republic of India. He will always live in the hearts of all Indians for his patriotic fervor and dedication to the Indian Republic.” The country also pays homage to one of its great sons and former Prime Minister Lal Bahadur Shastri on his 50th death anniversary. The nation celebrates with pride the 67th Republic Day on 26th January. We bow before those who framed with their collective wisdom this wonderful constitution, unparalleled in the World, which gives every citizen of India a right to live peacefully under the protection of laws framed in the constitution.
While offering her felicitations on the occasion of the Republic Day the Congress President Smt. Sonia Gandhi said she ‘hoped that sovereignty, democracy, equality and justice will always prevail and perpetuate.’ It is unfortunate that the ruling NDA chose this occasion to hit out at the basic structure of Federalism in the country, provided in our constitution to displace a duly elected government, in a sensitive state like Arunachal Pradesh, to rule it through the back door by imposition of Presidents rule.