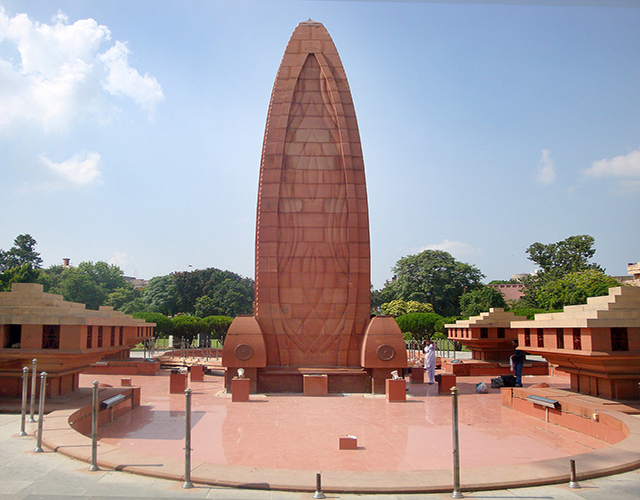 The 1919 Amritsar massacre, also known as the Jallianwala Bagh massacre, the Jallianwala Bagh in Amritsar, was ordered by General R.E.H. Dyer. On Sunday April 13, 1919, which happened to be ‘Baisakhi’, one of Punjab’s largest religious festivals, British Army soldiers, commanded by Brigadier-General Reginald Dyer, began shooting at an unarmed gathering of men, women, and children without warning. Dyer marched his riflemen to a raised bank and ordered them to kneel and fire. Dyer ordered soldiers to reload their rifles several times and they were ordered to shoot to kill. British Raj sources estimated the fatalities at 379, and with 1,100 wounded. However, the casualty number quoted by the Indian National Congress was more than 1,500, with roughly 1,000 killed. On April 13, the holiday of Baisakhi, thousands of Hindus, Sikhs and Muslims gathered in the Jallianwala Bagh near the Harmandir Sahib in Amritsar. Baisakhi is a Sikh festival, commemorating the day that Guru Gobind Singh founded the Khalsa Panth in 1699.

During this time people celebrate by congregating in religious and community fairs, and there may have been a large number who were unaware of the political meeting. “The Martyrs’ Well” at Jallianwala Bagh. The Jallianwala Bagh was bounded on all sides by houses and buildings and had few narrow entrances, most of which were kept permanently locked. The main entrance was relatively wider, but was guarded by the troops backed by the armoured vehicles. General Dyer ordered troops to begin shooting without warning or any order to disperse, and to direct shooting towards the densest sections of the crowd. He continued the shooting, approximately 1,650 rounds in all, until ammunition was almost exhausted. Apart from the many deaths directly from the shooting, a number of people died in the stampede at the narrow gates or by jumping into the solitary well on the compound to escape the shooting. A plaque in the monument at the site, set up after independence, says that 120 bodies were pulled out of the well. The wounded could not be moved from where they had fallen, as a curfew had been declared - many more died during the night. The number of deaths caused by the shooting is disputed. While the official figure given by the British inquiry into the massacre is 379 deaths, the method used by the inquiry has been subject to criticism. Officials were tasked with finding who had been killed during July 1919, three months after the massacre, by inviting inhabitants of the city to volunteer information about those who had died. This information was likely incomplete due to fear that those who participated would be identified as having been present at the meeting and some of the dead may not have had close relations in the area. Since the official figures were likely flawed considering the size of the crowd (15,000-20,000), number of rounds shot and period of shooting, the politically interested Indian National Congress instituted a separate inquiry of its own, with conclusions that differed considerably from the Government’s.
The casualty number quoted by the INC was more than 1,500, with approximately 1,000 killed. Despite the Government’s best efforts to suppress information of the massacre, news spread elsewhere in India and widespread outrage ensued; however, the details of the massacre did not become known in Britain until December 1919. As per regimental diaries kept by the Gorkha Battalion adjutants in the British Indian Army, the plan to attack the gathering in Amritsar was claimed to have been triggered by the news of a mob attack on a British school teacher Sherwood on April 9, which was later shown to be merely an excuse used by an incensed Dyer who commanded abrigade in nearby Jalandhar and the Lt Governor of Punjab Michael O’Dwyer who were convinced that they faced an imminent threat of mutiny in Punjab on the scale of 1857. Back in his headquarters, General Dyer reported to his superiors that he had been “confronted by a revolutionary army”. O’Dwyer requested that martial law be imposed upon Amritsar and other areas; this was granted by the Viceroy, Lord Chelmsford, after the massacre. The “crawling order” was posted on Aug 19 under the auspices of martial law. Dyer was messaged to appear before the Hunter Commission, a commission of inquiry into the massacre that was ordered to convene by Secretary of State for India, Edwin Montagu, during late 1919. Dyer said before the commission that he came to know about the meeting at the Jallianwala Bagh at 12:40 hours that day but did not attempt to prevent it.
He stated that he had gone to the Bagh with the deliberate intention of opening fire if he found a crowd assembled there. “I think it quite possible that I could have dispersed the crowd without firing but they would have come back again and laughed, and I would have made, what I consider, a fool of myself.” Dyer’s response to the Hunter Commission Enquiry. Dyer said he would have used his machine guns if he could have got them into the enclosure, but these were mounted on armoured cars. He said he did not stop the shooting when the crowd began to disperse because he thought it was his duty to keep shooting until the crowd dispersed, and that a little shooting would not do any good. In fact he continued the shooting till the ammunition was almost exhausted. He stated that he did not make any effort to tend to the wounded after the shooting: “Certainly not. It was not my job. Hospitals were open and they could have gone there.” The Hunter Commission did not award any penal nor disciplinary action because Dyer’s actions were condoned by various superiors (later upheld by the Army Council). However, he was finally found guilty of a mistaken notion of duty and relieved of his command. On 13th April 1919, a Sikh teenager who was being raised at Khalsa Orphanage named Udham Singh saw the happening with his own eyes and avenged the killings of more than 1500 of his countrymen by killing Michael O’Dwyer in Caxton Hall of London. On the 31st July, 1940, Udham Singh was hanged at Pentonville jail, London.