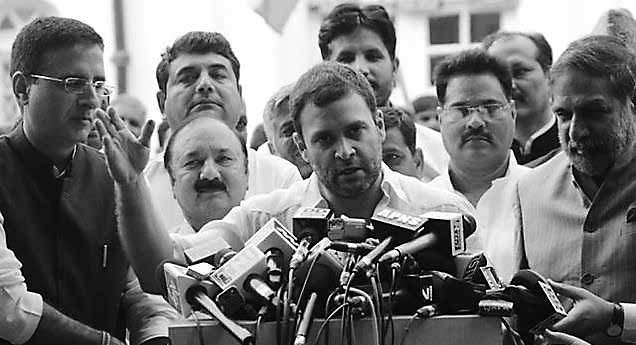 Shri Rahul Gandhi said that first of all I want to congratulate all the workers and leaders of the Great Alliance (Mahagathbandhan), Nitishji, Laluji, and our leaders of the Congress Party and the party workers of Nitishji and Laluji. This is a victory of the truth. This is a victory of brotherhood. We have achieved a very big victory over anger, division and over pride. There is a message for Modiji this message is reverberating all over India and he should clearly hear it as well as understand it. He is the Prime Minister and the whole country is telling him that Narendra Modiji, BJP and the RSS cannot divide this country.
Elections cannot be won by instigating fights between Hindus and Muslims. In the coming time we will show them that this country does not belong to any one caste, or any one religion, this country belongs to all and every citizen living here should have his space and there has to be brotherhood among them, there should be love among them. The pride that has gone in the BJP, the pride that has gone in the head of Narendra Modi, I want that he should try to shed this pride, or reduce it. He is the Prime Minister of the country and the country will benefit out of it, and he too will benefit. The way the BJP has spoken about some things, what the Prime Minister has spoken, that does not suit him and does not suit our country. This message is very clear that this country requires love, requires brotherhood. Our full support is with Nitishji.
We had said so during elections that Nitishji would be the Chief Minister. We want, the Congress Party wants, the Congress President wants that development takes place in Bihar and Nitishji has shown that he can bring development. We will support him. At the end I would once again like to congratulate Nitishji, Laluji and all the Congress Party leaders. Q. On the question whether the Congress Party after the Bihar elections, would like to enter into alliance in the other states also to come upon its own? A. Shri Rahul Gandhi said that you are talking about NDA, the truth is that this victory is not against the NDA, this victory is against the thinking of the RSS, BJP and Narendra Modi. This victory is against putting Hindus against Muslims.
This country is of everyone. Bihar has given a reply to Narendra Modi, that the awards that our laureates are returning their awards, the Congress Party is saying and the youth of this country is saying that you act like a Prime Minister and stop making promises, stop making speeches and start doing work. Because India has come to a standstill for a year, for your car is not starting, start it and press on the accelerator. Because if you do not press the pedal then the public will open the door and throw you out. One more suggestion, that you go to England, you go to America, you go to China, you talk about Pakistan, you stop going around, you talk about farmers and go among them, go among those youth to whom you had promised a job. Go and embrace them and run this country. Later, on 19th November, 2015, Congress Vice President, Shri Rahul Gandhi met the newly elected 27 Congress MLAs of Bihar Assembly at his residence in New Delhi.