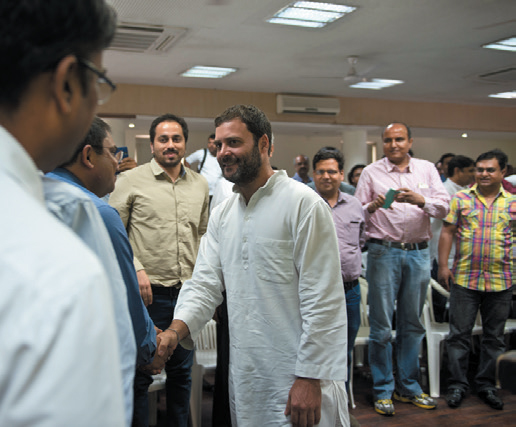 Firing yet another salvo at the Narendra Modi Government, Congress Vice President Shri Rahul Gandhi on 2nd May, 2015 claimed it had diluted provisions of Real Estate Regulatory Authority Bill making the legislation pro-builders from being pro-buyers. After meeting several NCR flat buyers at the Congress Party Headquarters, the Congress Vice President, who has been attacking the Centre over land bill issue and the plight of farmers, said that he had learnt that it is not just farmers and tribals but also the middle class people that are “suppressed” on matters related to land. Assuring homebuyers that he would stand by them, Shri Rahul Gandhi said that it was due to lack of transparency, the buyers were left in a quandary. “They are told that you will get the flat on a particular day but for years they don’t get the flat.
They are told the super duper area of the flat would be so much but what is delivered is different,” he said. He further said that someone was promised that the flat will have a good view, but a few months after the flat was delivered, another building came up and the view was blocked. Shri Rahul Gandhi said the government was trying to destroy the Bill which Congress led UPA had brought to regulate the real estate sector. “Main dilution is that there was clear transparency. The carpet area that you sign is what would be given. They have diluted and from pro-buyer, made it pro-builder,” he said. Attacking the government, Shri Gandhi said, “What it is doing against farmers and tribals, it is also doing against the middle class”.
“I have assured them that the way I stand with farmers and tribals I stand with them also,” he told reporters. One of the home buyers who had met Shri Rahul Gandhi, said that she had booked a flat in Noida but the possession was now delayed by several years. Explaining her problem, She said that she not only had to ensure payment of EMI, but also the rent of the house where she was living. “The builder is neither paying any penalty, nor is he listening to us,” she said. Other people who also had booked flats said that they were under tremendous pressure as they had put in their hard earned money in projects which were delayed for several years. another flat owner, said, “It allows builders to deposit only 50 per cent of the money collected from prospective buyers in an escrow account as against 70 per cent in the UPA bill, which means builders can misuse buyers’ money or spend in other projects.”
Those who met Shri Rahul Gandhi said he had assured them that his party would increase pressure on the Centre to roll back some of the proposed amendments to the law the UPA had introduced two years ago, while in power. Former Housing and Urban Poverty Alleviation (HUPA) Minister and Congress leader Ajay Maken also attacked the BJP-led NDA government saying it had made “118 amendments” to the Real Estate Regulatory Authority Bill which had been brought by the earlier government.
He said the intention of the Bill was to protect and support the buyers but the government had overturned it entirely through these amendments. The Congress is now set to demand that the bill be sent to a select committee for review.