The Government must match its words on fighting corruption with action : Sonia Gandhi 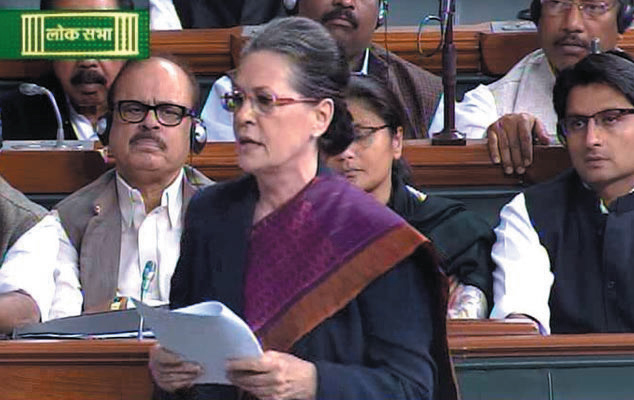 The Government must match its words on fighting corruption with action : Sonia Gandhi

ON APPOINTMENT OF CENTRAL INFORMATION COMMISSIONER

Madam Speaker, I bring to the attention of this House and the Government the deplorable lapse of the Government in not appointing the Chief Information Commissioner.

This post has been lying vacant for more than eight months resulting in a virtual standstill in the functioning of the Central Information Commission established by the UPA through the landmark RTI Act. In addition, the posts of three Information Commissioners in the CIC have been vacant for almost a year. I would like to point out that the UPA Government had ensured that the crucial post of the Chief Information Commissioner was never vacant from the day the RTI came into force.
The Prime Minister in the election campaign last year made many fervent promises to the people about transparency and good governance and continues to do so.Yet today in a blatant U turn, this Government has made sure through the absence of a CIC that the highest offices of power, such as the Prime Minister’s Office, the Cabinet Secretariat, the Supreme Court, the High Courts, the C&AG, the Ministry of Defence and other important Ministries are not accountable for violations under the RTI Act and are protected from wider public scrutiny.
Madam Speaker, this points to a clear attempt to avoid transparency and subvert the Act. The RTI is landmark legislation and its intent was to enhance Government’s accountability and responsibility. It is through this very legislation that millions were empowered to ask questions from their Government about how schemes and public works are being implemented and how public authorities are functioning.
Now, do our citizens no longer have the right to question their Government? Multiple reports in the public domain make clear that more than half the Information Commissions in the country lack adequate infrastructure causing long delays in the disposal of cases. The founding premise of the Right to Information was that citizens should not struggle with inordinate delays. Yet, the Government admitted in an earlier part of this Session that over 39,000 cases remain pending.
Madam, Speaker, information delayed is information denied. This is simply not acceptable. The Government has also shown a deplorable lack of interest in punishing those responsible for delays or admitting to lapses in the delivery of public services. Protecting the wrong-doer cannot be part of any Government’s ethos. Furthermore, on March 11, 2015, the DOPT, which is under the PMO’s control, transferred the financial powers of the CIC to a Government appointed Secretary. Such a post has no mention in the original RTI Act. The Act places all financial and administrative powers in the hands of an independent CIC.
There is no provision in the Act that allows the Government to take over the Commission’s functioning in the absence of a CIC. Madam Speaker, this action is a brutal blow to the autonomy of the CIC. The unavoidable conclusion from all these are that the Government is setting out to systematically subvert the functioning of the RTI Act and shield itself from public scrutiny and accountability. This is not all. It is pertinent in this context to ask as to why the two posts of the Central Vigilance Commissioner and the Lokpal remain vacant till date.
This Government has shown extraordinary urgency in introducing many legislation, yet the Whistle Blower’s Protection Act, 2011 has not yet been put in effect even though it received Presidential assent in May, 2014.
This Act is essential to safeguard whistle blowers who are extensive users of the RTI Act.
All these are instruments to combat corruption and blunting them cast serious aspersions on this Government’s real intention. Madam Speaker, the Government must match its words on fighting corruption with action. Through you, I would like to urge that these vacant posts be filled, RTI requests dealt with as they should be and the oversight process of the Government not be there any longer.