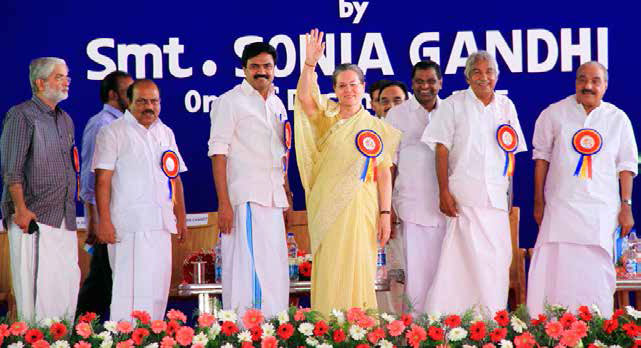 I am delighted to be launching the silver jubilee celebrations of this prestigious institution, the Rajiv Gandhi Institute of Technology, in this beautiful setting. It is an important milestone that has been reached. I congratulate Chief Minister Oomen Chandy ji for having made the setting up of the Institute possible. He had first announced its creation in his 1991 Budget Speech. Since then the RGIT has expanded significantly and it has emerged as a major centre of excellence in Kerala. I felicitate the faculty, the students and the alumni as well for their achievements. Rajiv Gandhi brought India into the IT age. Today our country is recognized the world over as a leader in IT. The basic infrastructure for science and technology and for higher education that has made this possible was established during Jawaharlal Nehru’s Prime Ministership. When Rajiv Gandhi became Prime Minister, he seized the new opportunities that were opening up and the new potential that was waiting to be harnessed. It was during his tenure that India entered the computer and the telecommunications era in a major way.
He was bitterly criticized as being elitist for his emphasis on these areas, but he persevered with single-minded focus. How ironic it is that yesterday’s critics have today become the claimants of his valuable legacy. For him, technology was more than laboratories and institutes, or computers and phones and satellites. It was an instrument of social transformation and social empowerment. That is why he launched the technology missions in areas like drinking water, i m m u n i z a t i o n , literacy, oilseeds and communicat i ons . India eradicated polio because of the immunization mission. Public call offices or PCOs as they were known then, proliferated across the country and provided widespread connectivity because of the c ommu n i c at i ons mission, paving the way for the mobile phone revolution.
Kottayam became the first fully literate city in India in 1989 thanks to the literacy mission. Over tens of thousands of villages that did not have a source of safe drinking water in India developed one because of the drinking water mission. And it was then that the computerization of railway reservations started which has since transformed the daily lives of over two crore Indians. To Rajiv Gandhi who had studied engineering, technology was not just related to hardware. It was also closely interwoven into the software of values. Jawaharlal Nehru had repeatedly spoken of the need to propagate a scientific temper in our society. Rajiv Gandhi understood its importance. He was deeply conscious of our customs and traditions and respected them. Yet at the same time he strove to promote a more modern and progressive outlook, and the convergence of our ancient wisdom and scientific knowledge. This was one of the key anchors of the National Education Policy, which he personally gave direction to in 1986. His steadfast belief in technology and his commitment to democratic, secular and liberal values were two sides of the same coin.
He warned against those forces who proclaim their commitment to technology on the one hand, but practice social obscurantism and intolerance on the other; forces that are rewriting our history, denying India’s glorious composite heritage. Kerala has shown the way to the rest of the country in many different areas and continues to be a beacon for communal harmony, social justice and gender equality. I am sure that the RGIT will continue to uphold these ideals even as it grows further as a national centre for engineering education. I also do hope that the Institute will play an increasingly important role in addressing the developmental challenges that Kerala faces like, for instance, in rejuvenating its traditional industries, in adding value to plantation crops and in fostering entrepreneurship, to name just three examples.
Friends, Kottayam is famous throughout the world for its rich and varied heritage. It symbolizes the mingling of different cultures that has defined our country for centuries. It is the centre for trading in spices and commercial crops. It is known as Akshara Nagari for its contributions to print media and literature. The Rubber Research Institute located here has contributed to making India a leading rubber producer in the world. Clearly, Kottayam encourages and fosters knowledge and its applications. I am confident that the Rajiv Gandhi Institute of Technology too will establish itself as a landmark institution on the intellectual map of the country.
The energy and enthusiasm of so many young men and women present here today will undoubtedly contribute to the realization of this objective. You too are young! You too have a dream! May your dream come through! I have great pleasure in dedicating the Institute to the nation. I wish all of you the very best for 2016.