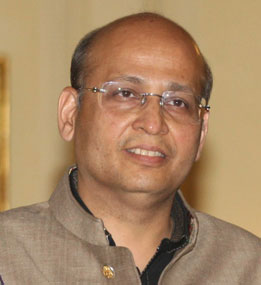 Spokesperson Dr. Abhishek Manu Singhvi, MP: He said you have now again heard a cry of agony from the Judiciary as an institution. Just today, the Judiciary for the nth time collectively speaking through the Head of the Judicial family in an on-going proceeding which has been going on for some time has now castigated the Government for continuing to delay judicial appointments.

We, from this podium, as Indian National Congress, condemn this attempt by the Government of the Day to erode and undermine yet another pillar of our democracy. We know this Government’s track record in showing its intolerance of dissent eroding one pillar of democracy - free speech, indeed Press Freedom - as well. We have seen its attack on Institutions. We have seen its scant regard for secularism and we are now seeing a clear attempt to demean, control or otherwise embarrass the Judiciary. It is very regrettable that the Memorandum of Procedure the MoP and I say so with deep regret but I have no other word to describe it is being used by the Government as an instrument of blackmail. Virtually as much has been said suggesting that we will not clear appointments on time or we will not clear them except with huge delay unless you the Judiciary agree to the Memorandum of Procedure proposed by us the Government. This is unprecedented and unheard of.

All of us may have different views about the National Judicial Commission. All of us Political Parties, individuals and Courts an and should, in democracy, have different views. But once NJAC judgment has come by 5 Judges of the Hon’ble Supreme Court more than a year ago, and then it has to lead to quietus on that front. You cannot have a Supreme Court judgment undermined, sabotaged; obstructed after the judgment by bargaining in this manner on the MoP. The state of affairs is shocking - you go down with list of 22- 23-24 High Courts, and you will find that overwhelming majority having only 50% of the sanctioned strength. You have most of them in the laughable position that few years earlier, the original sanctioned strength was increased to provide for more Judges to be appointed and now having increased the sanctioned strength, you have large number of 50% vacancies in some High Courts even on the original unincreased strength. This is indefensible if you have 3 Crore arrears and 50% or 45% vacancy of 450+ Judges, out of a total of 1000 or 1100 Judges in the country, what is the use of talking of good governance.

What is the use of talking of pain relief or a healing touch for the common litigant? The Judiciary as an independent Institution and our Dispute Redressal Mechanism has made India proud across the world. China, with far greater development, does not have a Judiciary half as well known as ours. Can we bring the legal system to its knees because of the egoistical blackmailing tactics of the Government? Can we bring to its knees because the Government wants, I say so with great deep regret. We have seen earlier Departments and Ministries of this Government which may be aptly described as ’Call Drop Ministry’ or the ’Call Drop Department’. We now have both the Ministry and the PMO which can be put, which can be called the ’File Hold Department’ or the ’File on-Hold Department’ as far as judicial appointments are concerned.