We Won’t Let Them Destroy Farmers”: Rahul Gandhi Hits Out at Government 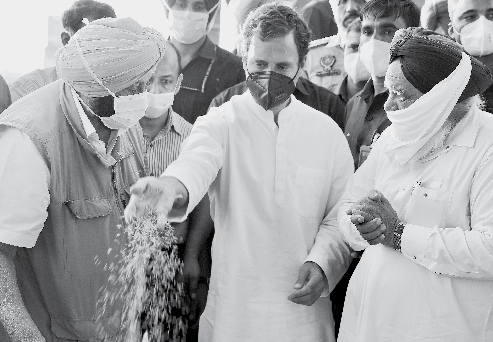 We Won’t Let Them Destroy Farmers”: Rahul Gandhi Hits Out at Government

“Their (the BJP’s) only aim is to destroy MSP and food procurement... The Congress is never going to let this government to do it,” he added, flagging off the three-day tractor rally by farmers in Punjab on 4th October, 2020.

The Congress leader, later in the day, said that the farmers of India could not survive without MSP.

“I know the system has its flaws. But the system cannot be destroyed. Make the system better,” he added.

The “Kheti Bachao Yatra” (March to protect the agricultural sector) is aimed to highlight the Congress’ stand against the laws that were cleared by the parliament last month amid fiery protests by the opposition.

Shri Rahul Gandhi said that, “Indian billionaires want your land and money. This government is run by billionaires like Adani and Ambani. Why weren’t farm bills discussed in Rajya Sabha?

The BJP has passed the Farmers’ Produce Trade and Commerce (Promotion and Facilitation) Bill, Farmers (Empowerment and Protection) Agreement of Price Assurance and Farm Services Bill and the Essential Commodities (Amendment) Bill”.

Farmers and the opposition claim that the new laws — which enable them to sell produce to corporates anywhere in the country — lays them open to exploitation by big companies. They also say that with the entry of private players into the agricultural sector, they will not get even the Minimum Support Price for their produce.

Chief Minister Amarinder Singh said that his party would put all its force to repeal the “draconian” farm laws. “We will put all our might to get the Anti-Farmer Laws repealed. I won’t let my Punjab farmers suffer because of such draconian laws,” he said.

Shri Rahul Gandhi held a tractor rally as a part of the first day’s schedule of the three-day Yatra along with Chief Minister Amarinder Singh and Punjab Congress chief Sunil Jakhar and other party leaders.

Shri Rahul Gandhi’s visit to Punjab comes days after Capt. Amarinder Singh held a sit-in against the farm laws. Punjab and several other states have witnessed fierce protests by farmers in the last week over the three laws that were cleared by the President on 4th October, 2020.

“Will Wait for Even 500 Hours”: Rahul Gandhi, Stopped by Haryana Government

New Delhi: Congress leader Shri Rahul Gandhi’s tractor rally to campaign against the centre’s farm laws was stopped briefly outside Haryana this afternoon (4th October, 2020) by dozens of policemen. The Congress leader, who was moving from party-ruled Punjab towards Haryana for his three-day rally, had said he would not budge “even if he had to wait for 5,000 hours?” It turned out to be less than an hour before the Haryana government allowed in a small contingent.

Later Haryana’s BJP government soon told the group that only 100 people could enter. Three tractors, including Rahul Gandhi’s, were allowed to go through. Top Congress leaders from Punjab, travelling with Rahul Gandhi until that point, turned back.

“The ‘Kheti Bachao Yatra’ is against the kaala kanoon (dark laws) that will destroy the existing structure of agriculture in the country and affect Punjab and Haryana the most,” Shri Rahul Gandhi told the media in Punjab.

He addressed two rallies in Haryana.

Farmers of Hindustan know how to fight: Rahul in Kurukshetra

New Delhi: Congress leader Shri Rahul Gandhi on 6th October, 2020, said that the newly enacted farm laws will take away the jobs of lakhs of people associated with the mandi system.

Terming the new laws a ‘direct attack’ on farmers, the Congress leader, during his ‘Kheti Bachao Yatra’ that reached Haryana’s Kurukshetra in the evening, said, “By enacting these laws, the Prime Minister wants to enable the big corporate houses to take the entire agriculture business over.”

“Modi ji, if you think that farmers cannot fight due to the pandemic, you are mistaken. You do not know the farmers of Hindustan. They know how to fight,” said Shri Rahul Gandhi, who was joined by Haryana’s former chief minister Shri Bhupinder Singh Hooda and state Congress PCC President Kumari Selja. “Procurement, MSP and food security are interlinked. Entire system will collapse and lakhs of people will be left jobless if this chain is broken,” he added.

“If the BJP is to be believed, these bills are supposed to help farmers. Then why the farmers of this country are out on roads, agitating over these bills? Why were these bills introduced during the Covid-19 crisis and why was there no discussion in the parliament?” he asked.

‘Modi is a coward’

Firing his final and sharpest salvo before wrapping up his visit, Shri Rahul dubbed PM Narendra Modi a ‘coward’ while attacking him over the India-China standoff in the Ladakh theatre. “India is the only country in the world where army of another country entered, encroached upon its land, and killed its soldiers, but our coward Prime Minister says that there was no infiltration...” he said at a Kurukshetra grain market. “Desh ki zameen hadpi gayi hai aur yeh (prime minister) apne aap ko desh bhakt kehte hain,” he quipped.

The former Congress President, who also visited Jyotisar and offered prayers, said, “This PM doesn’t even know the strength of Indian Army, Indian farmers and labourers. He only focuses on building his image.”

‘Will repeal these laws within 10 days of coming in power’

Shri Rahul Gandhi assured the farmers that these three laws will be abolished within 10 days of formation of the Congress government. He said during six years’ rule, Modi government not only failed to do anything for the poor, “but also inflicted several wounds in the form of demonetisation, GST and now, these farm bills”.

Earlier, Shri Rahul Gandhi accused PM Modi of wasting taxpayers’ money. He said that PM Modi bought the Air India One because he saw that his friend US President Donald Trump has the Air Force One.