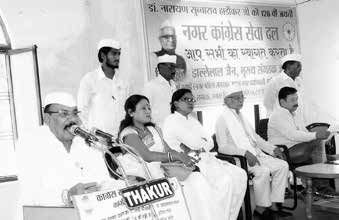 City Congress Sewa Dal, Chief Organizer,Jhallelal Jain presided over the programme. In this chief guest was former leader of Opposition in the Municipal Corporation, Vinay Saxen, and special guest were Rajesh Sonkar, Rajendra Jain Ratan, guests administered Guard of Honour to founder of Sewa Dal followed by the recitation of national song ‘Vandemataram’ by members.

On this occasion, appointment letter were distributed amongst the new office bearers of Sewa Dal. Block and City Congress workers in large numbers in full uniform of Sewa Dal attended the programme. Congress leader, Vinay Saxena emphasized over well coordination between the party workers and Sewa Dal. We have to work on the path shown by Dr. Narayan Subbarao Hardikar and we have to go amongst public following the ideology and philosophy of Congress. he also appreciated the works of Sewa Dal in establishing brotherhood, peace, prosperity and its fight against fundamentalist forces causing harm to the nation. He said that in spite of adopting shortcuts to gain popularity, the Congress Sewadal has to approach public following its own culture.