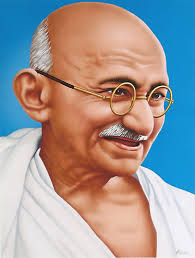 Gandhi had firm conviction that socialism of west was either in the form of dictatorship or in the form of arm chair philosophy and that it could never suit the Indian soil. “The application of socialism,” he said,” to the Indian conditions in the melting pot. Socialism as a cult is well-known. Whether socialism of the undiluted type can govern Indian conditions for generations is a question.” With such a background of his spiritualism, idealism and anarchism in addition to that of Ahimsa as embedded in the Indian tradition, it was not possible for Mahatma Gandhi to embrace the materialistic socialism of the west and said “Bolshevism is the necessary result of modern materialistic civilization, It’s insensate workshop of matter has given rise to a school which has been brought up to look upon materialistic advancement as the goal and which has lost all touch with the final things in life.”

Gandhiji did not agree with the Marxian analysis of history. According to Marx the basic principle is inert matter and not life or Atma. On the contrary, the basic tenet of Gandhiji’s faith was the existence of the spirit or Atma as distinguished from and superior to matter. The matter had its being in and by spirit, it had no separate existence Independent of spirit or Atma. “I don’t agree with the view”, said Gandhiji, “which denies the existence of any entity transcending the physical world. Its existence, however, cannot be proved through the evidence of the senses. It is self-evident. It can be realised only through the inner experience of man. In my view, the trend of human nature is essentially upward.”2 He rejected the Marxian philosophy that matter brought changes in economic, social and political fields. On the contrary, he felt it was the spiritual law that “effects the economic, the social and the political fields.”

According to Marxian philosophy, even the activity of inventing or creating is not, as it appears to be, a spontaneous mental activity, but is a function or by product of environmental circumstances.

On the contrary, Gandhiji has observed: “I do not believe that it is prakriti which originates and governs the thought processes of Purusha.” He further added:

“I do not consider economic factors to be the source of all the evils in the world, nor is it correct to trace the origin of all wars to economic causes. The Rajput wars which belong to modern history, had never their origin in economic causes.”

Gandhiji was an exponent of spiritual socialism and therefore has propounded the spiritual interpretation of history which is as old as the rise of religious consciousness in the hearts of man. He never missed an opportunity to emphasize “the futility of mere external activity” and the need for “intensive internal development.” He exercised his influence to make the Congress primarily a self purifying association to achieve its goal by developing internal strength, instead of becoming a begging association.8 According to Gandhiji, history of human beings is a continuous record that has steadily been progressing towards Ahimsa. Our ancestors were carnibals, then they began to live on cheese and then on agriculture and food. This already shows that Ahimsa is in progress. He believed that “the sum total of energy of  mankind is not to bring us down but to lift us up, and that is the result of the definite, if unconscious, working of the law of love.” Hence, he came to a conclusion that the human society is a ceaseless growth, an unfoldment in terms of spirituality.”

To Gandhiji, this theory envisaged permanent and irrevocable antagonism between capital and labour. He did not believe in the  necessity of fermenting it. The virtue lies in preventing it. To quote Gandhiji:

Gandhiji believed that the capital and labour need not regard each other as inherently irreconcilable antagonists. Each is dependent on the other. “A labourer’s skill” he said, “is his capital.” Just as the capitalist cannot make his capital fructify without the co-operation of labour, even so the working man cannot make his labour fructify without the co-operation of capital. And if both labour and capital have the gift of intelligence equally developed in them and have confidence in their capacity to secure a fair deal, each at the hands of the other, they would get to respect and appreciate each other as equal partners in a common enterprise.”

Sarvoday not dictatorship of the Proletariat

He rejected it outrightly. “I can’t accept”, declared Gandhiji, “benevolent or any other dictatorship, neither will the rich vanish nor will the poor protected.”16 Moreover, “there is no guarantee that the industrial workers’ dictatorship may not become a caste of an tyrannical, imperialist and intriguing exploiters as that of the Tsar and his nobles or the capitalists.” According to Gandhiji, dictatorship always leads to violence and gives impetus to greater violence.17 He also disapproved of it because “it does the greatest harm to mankind by destroying individuality which lies at the root of all progress.”

“The real remedy,” claimed Gandhiji, “lies in non-violent democracy, otherwise spelt true education of all. The rich should be taught the doctrine of stewardship and the poor that of self- help.” His ideal was greatest good of all and not of a class or a chosen few. As early as September10, 1920, he explained his ideal society which made no distinction between the rich and the poor. “I shall work for an India”, he wrote,   “in which the poorest shall feel that it is their country in whose making they have an effective voice.” Therefore Mahatma Gandhi wanted to build an egalitarian society which could rest on ahimsa, truth and love. He could never appreciate the dictatorship of the proletariat which rests emphatically on the pillars of violence, bloodshed, hatred and untruth.

The economic ideas of Gandhiji, although quite different from the Western schools of socialism, are essentially socialistic in their nature. Marxian find its basis in materialism, class, antagonism, industrialism and dictatorship of the proletariat, where as Gandhian socialism finds its foundation in morality, hinduism, rurality, humanitarianism and democracy.

Gandhiji was a moral socialist, therefore he saw the foundations of socialism in morality, spiritualism and true religion. It could not be achieved through conquest of political power, force or bloodshed. It must start with the moral regeneration of the individual. Expressing his ideas in Harijan he said:

“Socialism begins with the first convert, if there is one such, you can add zeroes to the one and the first zero will account for ten and every addition will account for ten times the previous number. If however, the beginner is a zero, in other words, no one makes the beginning multiplicity of zeroes will also produce zero value. Time and paper occupied in writing zeroes will be so much waste.”

According to Gandhiji, real socialism lies in compassion, good will and conversion. In India, real socialism is to be seen in the very first verse of Ishopanishad. Commenting on the birth of scientific socialism. he said, “socialism was not born with the discovery of the misuse of capital by capitalists. As I have contended, socialism, even communalism, is explicit in the very first verse of Ishopanishad. What is true is that when some reformers lost faith in method of conversion, the technique of what is known as scientific socialism was born. I am engaged in solving the same problem that faces scientific socialists. It is true, however, that my approach is always and only through unadulterated non-violence.”

Gandhiji did not see any meeting ground between the ways of western socialism or communism and that of his own. “Socialism and communism of the west” observed Gandhiji, “are based on certain conceptions which are fundamentally different from ours.” One such conception is their belief in essential selfishness of human nature. I don’t subscribe to it for I know that the essential difference between man and the brute is that the former can respond to the call of spirit in him, can rise superior to the passions that he feels in common with the brute and therefore, superior to selfishness and violence, which belong to the bruto nature and not to the immortal spirit of man.” Gandhiji had no faith in coercion or violent means for the reconstruction of an egalitarian society. He wanted to do it through compassion, persuasion and conversion. This was the only way to abolish the existing inequalities in the society. If it is done, neither the wealth would be concentrated at one place nor would there be a famine.