5 Things We Wish Someone Would Teach Modi 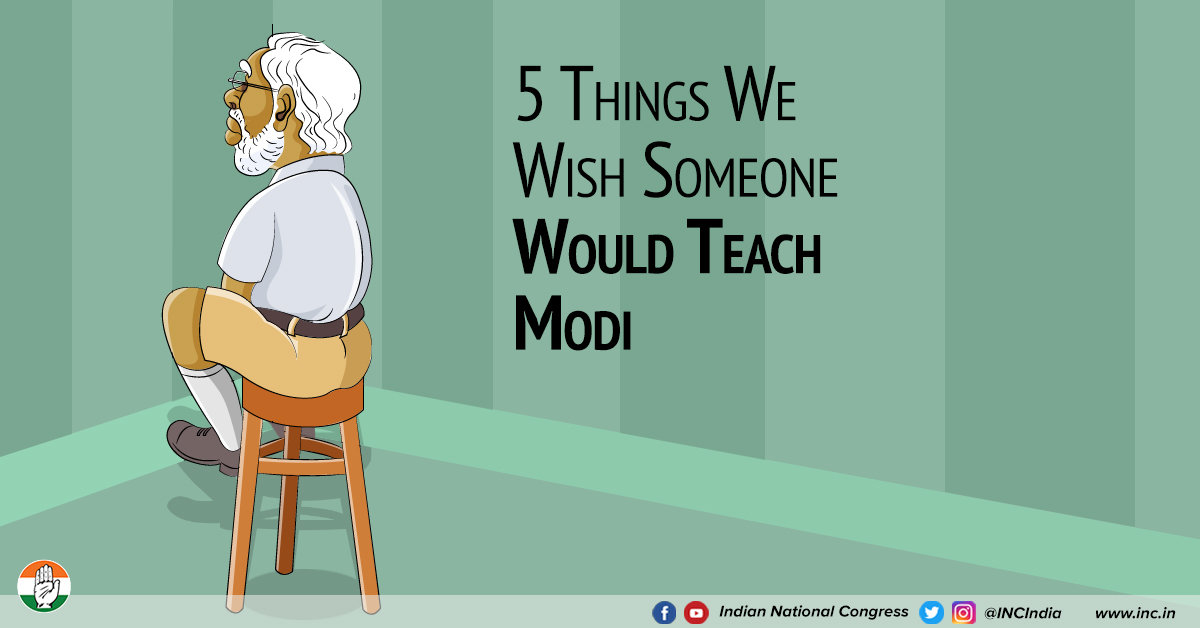 5 Things We Wish Someone Would Teach Modi

In honour of Teacher’s Day, we felt it was imperative that we highlight some of the things we wish PM Modi would learn. While we understand it’s taken him a certain amount of experience, cunning and guile to reach the position he has today, we can’t help but wonder how different of a man he would be if he had learnt the following things.

These are the top 5 things we wish someone would teach PM Modi:

There has been many a story about the historical gaffes made by our learned PM while he was on the campaign trail. We’ve decided to highlight a couple of our favourite ones;

The Mahatma would be disappointed to learn that one of his ‘biggest fans’ has been unable to get his name right. On two separate occasions the prime minister has referred to Gandhi ji as Mohanlal as opposed to Mohandas Karamchand Gandhi. It’s a shame that someone who’s trying to appropriate the teachings of Gandhi Ji, can’t bother to get his name right.

At a recent address in UP with Chief Minister Yogi Adityanath and other BJP leaders, PM Modi made the unfortunate error of talking about history. While paying his respects to Sant Kabir, he stated, “It is said that here, Saint Kabir, Guru Nankadeva and Baba Gorakhnath sat together and discussed spirituality.” While the notion of these great thinkers all sitting together and discussing spirituality and philosophy, gives us the fuzzy feels, the truth is the three gurus all belonged to different eras and thus could have never sat together - unless they appeared in hologram form, like PM Modi in one of his more ridiculous campaign stunts.

Every time PM Modi talks about a new scientific discovery, we can’t help but be reminded of the time he said Climate Change wasn’t real or when he propagated the use of gutter gas for cooking. It’s no laughing matter, at the end of the day this man represents our country & therefore it is a shame that he is such an enemy of logic & science.

The great scientific minds of world history struggled long and hard to create the table of elements, if only they had spent some time with PM Modi, it wouldn’t have taken them half as long. Our prolific leader created a whole new element in one fell sweep - Mitrogen!

While we can’t expect PM Modi to know every town in every country, the least we expect is him not to confuse India with Pakistan. Geography, at least in our minds, is a fairly vital subject for the leader of a country to understand.

In 2013, while campaigning in Bihar the BJP leader made the mistake of getting into the tricky subject of history & mythology - tricky because his own track record of historical subjects is mired in silly mistakes - he said, “When we remember the era of higher learning, Nalanda and Taxila come to mind”. The only problem here, Taxila is located thousands of miles away from Bihar, in Pakistan

This one is a classic example of PM Modi’s lack of knowledge or general disregard for the facts. On several occasions he’s mixed up his numbers, given inaccurate data or completely jumbled up basic statistics.

While there are numerous examples of PM Modi’s failed mathematics, we feel the most important is on jobs. He’s been claiming his government has provided over 1 cr jobs in the last one year, he’s cited EPFO data to prove the same, however, a basic calculation proves the govt. hasn’t budged over the figure of 450 jobs a day - hence coming nowhere close to the proposed figure.

This one is a touchy topic for the PM, primarily because he presents himself as the pinnacle of morality in India. Unfortunately this tale is a far cry from reality. Here’s a few things he could work on:

Our PM has tendency to stretch the truth on most occasions and very often blatantly make things up, that in itself is not becoming of a national leader, but when he encourages his followers & workers to do the same, we’re left with a government of phonies.

Interestingly there’s a collaborated list of all his lies: https://www.modilies.in/

The most basic tenet in any democracy is the freedom to express yourself, this is a right that is slowly being eroded from Indian democracy due to the autocratic leadership of PM Modi & his govt. When every major international body is criticising your govt. for hindering democracy, it’s time to take a closer look at your governance.

Our list would not be complete without the following mentions.

Then again, we could be wrong, after all PM Modi has a degree in Entire Political Science and that must be fairly conclusive.