Ajit Doval: a stooge, or an enemy within? 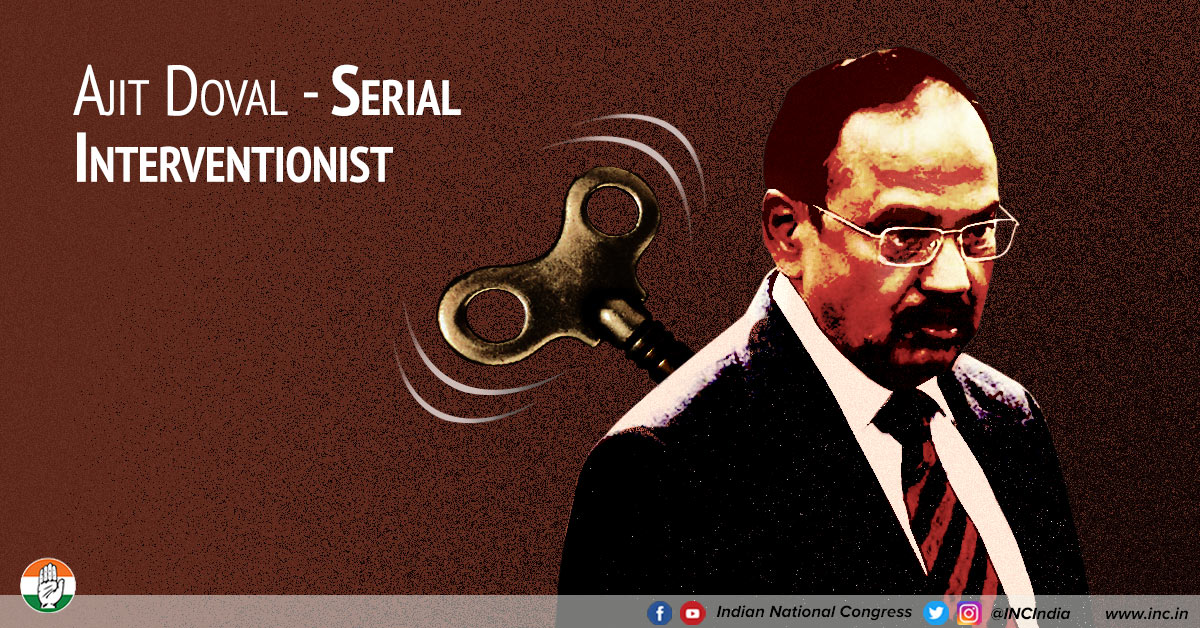 Ajit Doval: a stooge, or an enemy within?

In another unprecedented unfortunate incident, a petition by CBI DIG, Manish Kumar Sinha, has alleged that National Security Advisor (NSA), Ajit Doval, interfered in investigations against Special Director Rakesh Asthana and stymied a search of his residence. Playing with acronyms, which the PM is so fond of, Mr. Sinha has termed the CBI as Centre for Bogus Investigation – unfortunate, but courage and wit of the officer must be commended. However, this was only one of the many allegations that featured in the petition, hence, a long list follows.

The petition has argued that Mr. Manish Kumar Sinha’s transfer to Nagpur was the consequence of his investigation into the matter of Modi’s ‘blue-eyed boy’ – Mr. Rakesh Asthana, and, hence, should be quashed. The petition also levelled serious allegations on the PMO, Minister of State for Coal and Mines Haribhai Parthibhai Chaudhary, Law Secretary Suresh Chandra and the Cabinet Secretary Pradeep Kumar Sinha. An extremely simple and straight forward question arises: what are they all trying to hide, or if there is nothing to hide under the great Modi’s government, why such a furore?

Mr. Manish Sinha in his petition reveals that an FIRagainst the Mr. Rakesh Asthana – for taking bribe from accused Moin Qureishi – was filed on the 15thof October, 2018, and on the 17thof October, 2018, the then CBI Director, Mr. Alok Verma, informed the NSA about the FIR. On learning of the news, the first step that Mr. Doval took was to inform Mr. Asthana about the FIR – who in turn requested the NSA to make sure that he is not arrested. Subsequently, when the investigating officer, A K Bassi, went ahead with the investigation and asked for permission for seizure of evidence – including mobile phones – the request was denied by the then CBI Director as the NSA did not permit the same. On the 22ndof October, 2018, another request was put in – this time on record – but it was denied again as the NSA did not clear it, again. There is more than one issue of worry here, but the most important one being: why was the CBI, which works under the Department of Personnel and CVC, seeking guidance, or orders, from the NSA? Was the NSA working on someone’s behest? If yes, then who? This is blatant erosion of the CBI’s autonomy. We say this with a heavy heart, but it seems the CBI is not a caged parrot, it’s a leashed dog – protecting ‘the family’, biting ‘the outsider’, and unfortunately, Mr. Modi has a very lean family, if any at all.

NSA Ajit Doval has had a very peculiar service record. He is a self-proclaimed spy who currently works at diplomacy and national security. He is often referred to as the ‘most influential man in India’ as he has easy access to the ears of the so-called ‘most powerful man of India’. It is said that spies are often known by their failures – as successful missions, they cannot disclose; unsuccessful ones, they cannot hide. But in the curious case of Mr. Ajit Doval, he has been, himself, found boasting about spying missions that he was part. On top of the self-glorification, the ‘Godi media’ has left no stones unturned to portray Mr. Doval as the ‘desi bond’. However, none of the incidents reported by either the media or Mr. Doval, himself, have been verified, which they should have been as although intelligence agencies operate under secrecy but they do not operate in silos. However, a few incidents from Mr. Doval’s career that can be verified as are follows:

However, the sins of the Modi government do not just end with Mr. Doval’s misdeeds. There’s more to it, as if anyone had any doubts.

The Minister of State for Coal and Mines Mr. Haribhai Parthibhai Chaudhary, has been accused by the CBI DIG of corruption. Mr. Manish Kumar Sinha has alleged that Satish Sana –  the complainant in the Asthana case – had revealed to him that minister received money. As per the petition, the minister received “a few crores of rupees” in the “first fortnight of June 2018” as part of the ‘extortion racket’ being run by certain officers investigating the Moin Qureshi case – a case pending since 2011.

Minister Haribhai Parthibhai Chaudhary, Member of Parliament from Banaskantha constituency of Gujarat, has held some really important ministry portfolios – including Minister of State for Home. Is he another one of the ‘blue-eyed boys’ of Modi? The accused minister in the Moin Qureshi case was earlier in the limelight for the all wrong reasons for his speech in the Lok Sabha, while he was Minister of State for Home, where he stated that jails are more crowded in states where the Muslim population is high. Also, both Mehul Choksi and Nirav Modi belong to Banaskantha of Gujarat. Is there something more there? Wait for it.

There is clear evidence that at the top echelons of power collusion is taking place. CBI officers, including IPS officers, are transferred en masse to prevent enquiry into Asthana bribery case. CBI director was removed overnight, although unsuccessfully, to prevent an enquiry into the Rafale scam. The Law Secretary tries to influence SC monitored CVC-probe. This case is interlinked with many, like the Sandesara case. Why is the government so desperate? Is it to protect Minister Haribhai Parthibhai Chaudhary? Unlikely. There are violent waves in the ocean as a big, or maybe the biggest, fish is in trouble. A fish that is not just letting other fishes feed, but it is also on top of the food-chain, and its appetite is huge that it is eating the nation from within.