Anti-Worker and Anti-Labour Laws by the BJP 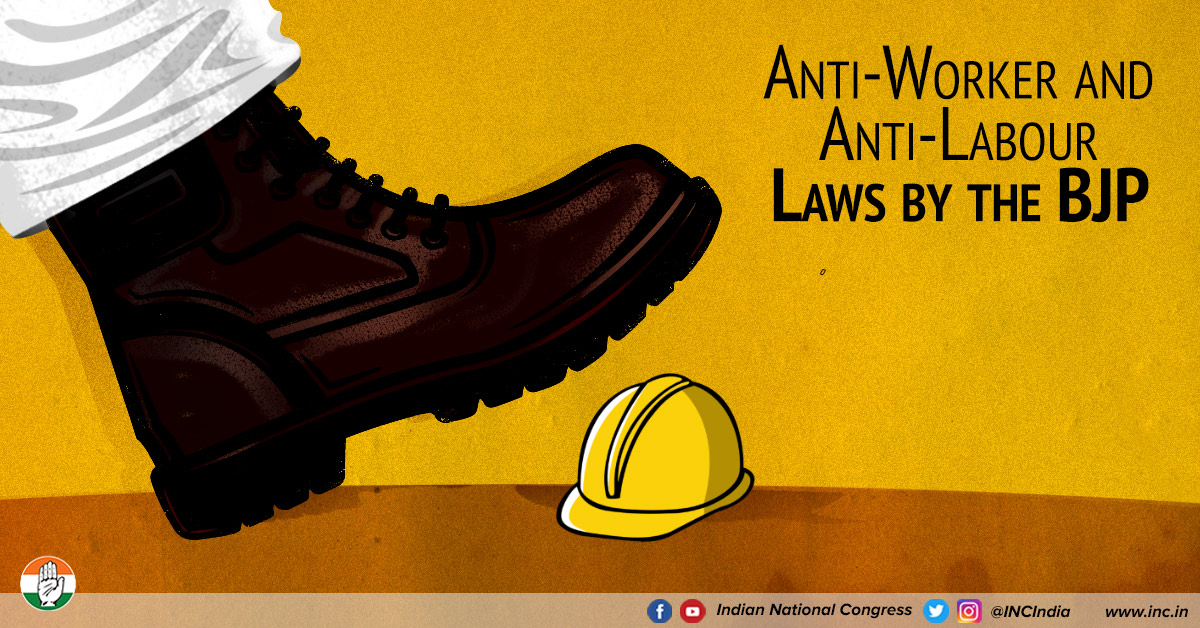 Anti-Worker and Anti-Labour Laws by the BJP

That Modi’s Suit-Boot Sarkar works for its corporate overlords and masters is well known to all by now. Modi chooses to put the interests of corporate India over those of farmers, labourers, the brave persons of our army, students, adivasis, and other oppressed sections of society has also been proven beyond doubt over the five years of the current government’s misrule. 11 million forest dwellers were evicted or threatened with eviction just this year for corporate interests. Paramilitary forces have not been accorded with the dignity due to them. Farmers have yet to see a centralised market as was promised to them by the BJP five years back. Small businesses suffered because of demonetisation and GST.

10 of the biggest trade unions of the country organised a worker’s strike of 200 million workers January this year, asking for minimum wage and a protection of the public sector. Modi has been trying to sell the country to the highest bidder, whether its in the defence sector, or the education sector. The Modi government proposed the Trade Unions Amendment Bill, 2018 which threatens the precious little scope for workers’ organization in India and goes against the established practices as agreed upon in tripartite (employer, employee and government) consultations in the past. Farmers and agricultural workers across India, which have also been suffering under the Modi government, also had extended their support to the strike, with organizations like the All India Kisan Sabha (AIKS) and All India Agricultural Workers’ Union (AIAWU) declaring a “rural strike” in support.

Maternity Benefits have been a sham with the current government, as has been the case with most other schemes in this government. In 2010, the UPA government started the Indira Gandhi Matritva Sahyog Yojana, under which pregnant and lactating mothers in 53 districts were given an allowance of Rs 4,000. In 2013, parliament passed the National Food Security Act, which prescribed a maternity benefit of Rs 6000 under section 4(b). But in 2016, Modi announced the maternity benefits scheme as a new one. Via a technicality, benefits were reduced from Rs 60,000 to Rs 5,000 – it was only meant for the first child, for women above the age of 18 years and for women who delivered their babies in a medical institution and not at home. This was a violation of the 2013 Act. Not only that, but 88 lakh women lost their jobs in 2018.
Under the Gujarat Labour Law 2015, there is a controversial provision which allows for out of court settlement of disputes between workers and management.

Since corporates can arrive at a compromise with employers without approaching court, this amendment clearly alienates workers from their basic right to reach the court of law and is a grave danger to the rights of workers, who can now be harassed by their employers and forced to reach “settlements” of no benefit to the workers.

India’s unemployment rate is at a 45 year high. Workers are not only losing their rights and benefits, but also their jobs. Farm income growth is at a 14 year low.

The Labour Code on Industrial Relations Bill, 2015, which combined provisions of the existing Industrial Disputes Act and the Trade Union Act, allow unions to be derecognised easily. Under the Maharashtra Labour Law, 2017, a large number of small and medium-scale establishments will be out of the purview of the Act, which is supposed to ensure benefits. Larger establishments will also employ four to five sets of 40 contract workers to avoid coming under this law. This means employers will avoid providing statutory benefits, including provident fund, the minimum wage and leave to contract workers in smaller units.

From 2015 to 2017, workers from all states staged protests against the anti-worker policies of the Modi government. About 180 million workers went on strike in 2016 against the "economic reforms" of government. It was termed as the biggest strike of workers of the world.

Workers, labourers, the youth, students, farmers – everyone is united in their suffering under the current government. And the Modi government must be held accountable for its apathy and downright cruelty towards workers of the country.