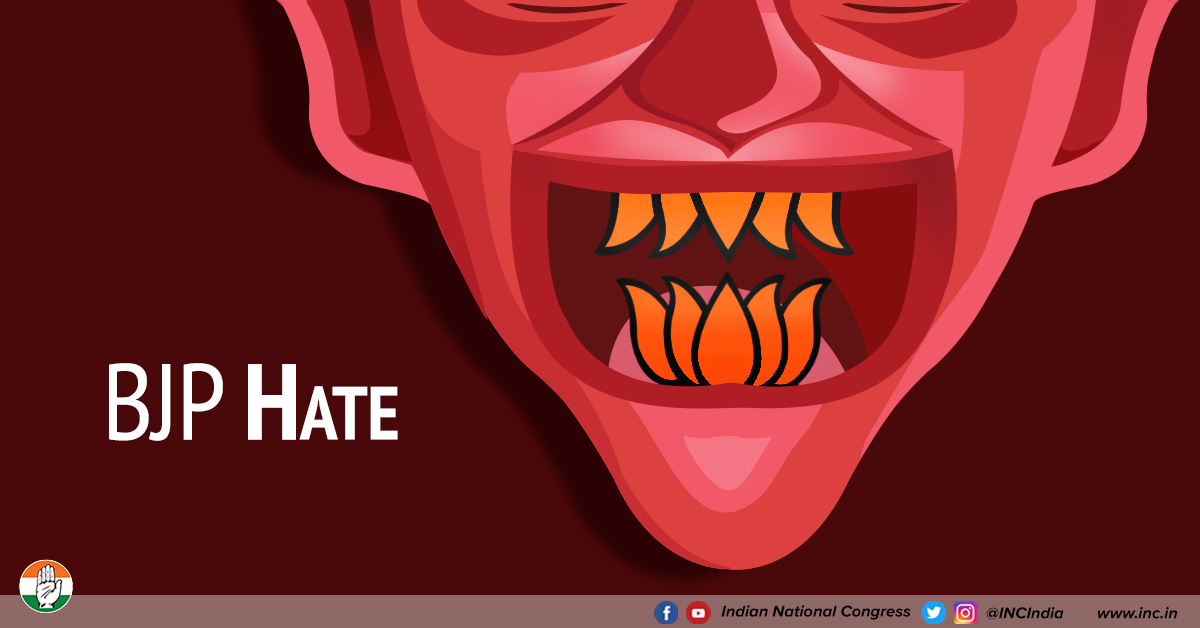 That the BJP runs itself on the old policy of “Divide and Rule” is old news by now to every Indian. But then, what else can be expected from a party that worships Godse over Gandhi – to say nothing of their worship and support of the British. And they seem to have perfected some tricks of their old British masters. The BJP has now given up all pretences of even trying to appear like a sane, secular, just, progressive party, and instead just gone all out with the hate, venom, division, and madness. They are the court jesters trying to pass off as efficient administrators vying for the crown – but they perhaps forget that the people of India wear the crown – the people are both the Kings and the Kingmakers. And the BJP should not take the King for a fool – as it has till now – because why else would it make statements insulting everyone from women to Muslims and Christians, from farmers to dalits, from adivasis to journalists, from lawyers to the army and police, from artists and journalists, from the people of the south, to the people of the north east of India?

When the Prime Minister of the country himself tries to divide the country along regional and communal lines by questioning Congress President Rahul Gandhi’s decision to contest from Wayanad, Kerala – a place close to Mr Gandhi not just because of the love given to him by the people of Wayanad, but the fact that his father Rajiv Gandhi’s ashes were immersed there, there is little to be expected from the rest of the party. When Mr Modi as Prime Minister addresses the country with this statement at a rally in Nanded – “Seat bhi aisi jahan par desh ki majority minority mein hai” (The “majority” of the country is in “minority” there), he thinks he is being clever by insulting the Congress party, but he is in fact insulting not just the people of the South, but also the rest of the country. But then again, the BJP spares no one of its hate – not even the brave persons of our army and police forces – on who’s hard working backs they try to shoot their guns from, and beg for votes. They insult the army when they call the proudly INDIAN army, “Modi’s army”, as Yogi Adityanath did at a rally in Ghaziabad in April. The army belongs to no one except the people of India.

Not even the police is spared insults and politicisation, when Pragya Thakur, accused in a blast case, celebrates the death of a brave martyr - a martyr whose death the nation still mourns. Pragya Thakur said she “cursed” and “caused” the death of Hemant Karkare – who died fighting terrorists at the Hotel Taj in Mumbai.

The BJP’s hubris knows no bounds. They feel they can “curse” anyone who offends them, and get their way through pure goondagiri. They clearly have proven they have no goodwill towards the people of India, and winning seats is all that matters to them. And no one has proven this more clearly than the man with 34 criminal cases to his name, Sakshi Maharaj, when he says, “Jab ek sanyaasi aapke darwaaze par aata hai, bhiksha maangta hai aur agar usko bhiksha nahi milti hai toh jaante hain wo grihasti ke punya le jaata hai aur apne paap de jata hai.” (When a sanyasi comes to your door to ask for something, you give it to him, or he curses you. Give me votes, or you shall be cursed.) Not much else can be expected after all from a man who calls Nathuram Godse a patriot, asks Hindus to increase their population by producing four children each, and says giving votes (matdaan), is just like giving your daughter away (kanyadaan). Yes, the BJP does not have goodwill towards all.

Even Maneka Gandhi has shown her true colours by announcing the hateful, bizarre, and plain crazy “ABCD category system” to demarcate voters and accordingly “reward or punish” them after the elections. According to Maneka Gandhi's proposed idea, those villages which cast 80 per cent votes to the BJP will be under category A, those which cast 60 per cent votes in favour of BJP will be category B, and the rest will be C and D categories – presumably not be bothered with post Elections. Unsurprisingly, the BJP does not believe in free will and the rights of the voter in the world’s largest democracy. Maneka Gandhi also said that she would “win the Lok Sabha elections from Sultanpur with or without Muslim votes”. The good ol’ BJP hubris on display yet again - “I am going to win for sure. If Muslims won’t vote for me and then come to ask for work, I will be bitter and think, what’s the use of giving them jobs.”

Meanwhile, Yogi Adityanath, not to be left behind in this blatant display of hate and hubris, joins in by saying, “Agar Congress, SP, BSP ko 'Ali' par vishwaas hai toh humein bhi 'Bajrang bali' par vishwaas hai.” Pragya Thakur calls brave martyr Hemant Karkare “anti-national and anti-Hindu”, and Pankaja Munde wants the Constitution changed! She has this to say about the most important book for the country – “Babasaheb Ambedkar wrote the Constitution. We have to change the Constitution.” Turns out, not even the Constitution is safe from this band of hooligans. And Pankaja Munde takes her hooliganism further by wishing murder upon those who dare to have free will in the world’s largest democracy – because as per the BJP, not even questions are to be allowed. She had this to say of Mr Rahul Gandhi, “A bomb should be tied to Gandhi’s body and sent to another country for asking proof of Indian Air Force’s surgical strike across the Line of Control (LoC).” Clearly, all rules of decorum and pretences of progress have been dropped by the BJP at this point. Now, it’s curtain call for the court jesters, before they take our palace of democracy further into bedlam.