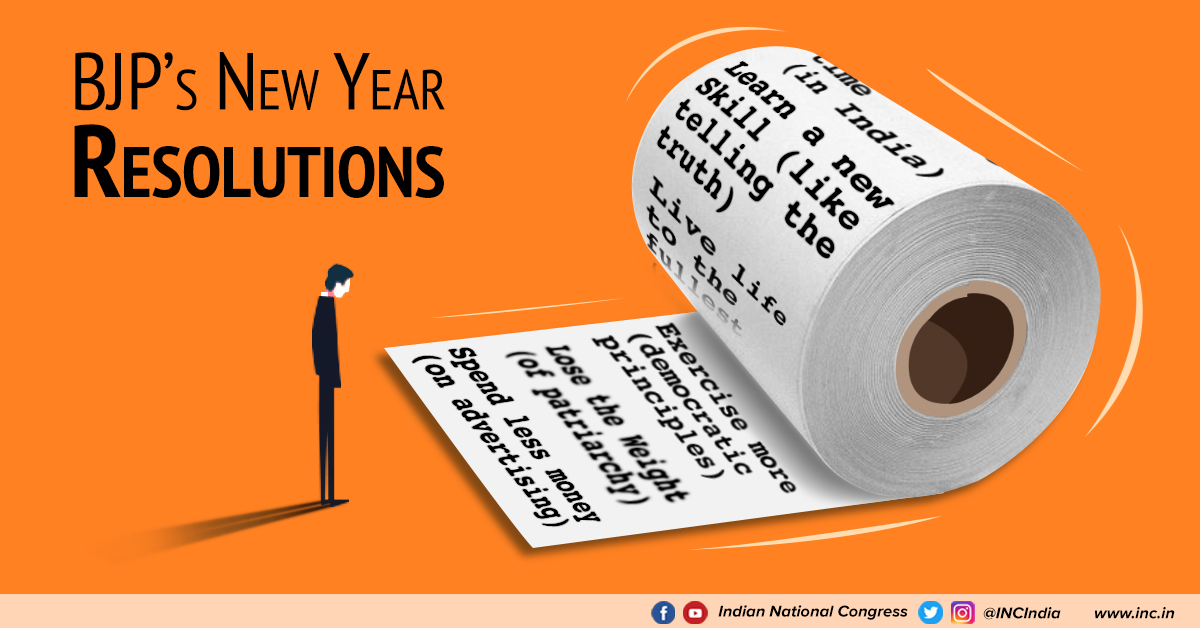 It’s that time of the year again, when most people begin to reevaluate and second guess their life choices. New Year’s Resolutions are the perfect excuse for all those who are constant procrastinators or are just too busy to make changes.

The New Year brings in promises that we all make for ourselves to better our lives as well as of those around us. So our New Year gift to the ruling party is to help them with their resolutions. We’ve taken some of the most popular resolutions that people make and have given them a little bit of a twist in order to ensure the best possible outcome for you all.

The first resolution of exercising more democratic principles is the need of the hour for BJP and must be given utmost priority. From imposing section 144 in major cities to the undemocratic scrapping of article 370 and especially the extreme force used against peaceful protestors recently; with the talks of the Citizenship Amendment Act (CAA) to that of the National Register of Citizens (NRC), BJP has proven democratic practices hold little value for them. Hence, such a resolution is not only apt, but much needed.

Lose the Weight (of patriarchy)

Similarly, this resolution about losing the weight of patriarch targets BJP’s narrative which is evident from the infamous Aditya Yogi Nath, who opposes the Women’s Reservation Bill, which the party has not yet implemented. Prime Minister Narendra Modi, known for his social media presence, follows 1779 people. Among them are people who post sexist tweets , personal attacks, abuses and rumours aimed at women, especially female journalists Barkha Dutt, Rana Ayyub, Sagarika Ghose and the late Gouri Lankesh.

The third resolution we wish that the BJP would stick to is quite obvious - Honesty is the best policy.

We have seen many lies spew out of their mouths, from the denial of the presence of detention centres to the fact that they have never uttered the letters N-R-C.

Recently we have seen the inconsistency in the narrative of Amit Shah as well as Narendra Modi with the former announcing in Parliament that the NRC is inevitable and the latter denying any talks about it at all. They’re trapping themselves in a web of lies, so we’re certain that this resolution will serve them well.

Live life to the fullest (and let others do the same)

The ruling government doesn’t like anybody voicing their dissent towards them, even if it is in a peaceful and democratic manner. Anything that may cause them even the slightest inconvenience must be cracked down upon hard. The unlawful detainments, the entry of the police in educational institutions, the firing of pellet guns on peaceful protestors or the arrest of journalists who relay the facts & tell the truth, are just a few examples.

The BJP is the single largest spender on advertisements, they’ve spent approximately Rs. 17 crore, which is 500% more than what the Indian National Congress, which was around Rs. 2.7 crore for the 2019 elections. In their first four years, BJP spent over 4000 crore on advertising alone. This exorbitant amount could have been spent on feeding 1 million children for 3 years, 10 Mangalyan projects, building 4 more AIIMS and much more.

Narendra Modi has travelled to 92 countries in 55 months which cost him more than Rs. 2,021 crore. In 2020 he should consider spending more time working to achieve his many tall promises & less on foreign trips & campaigning.

Read more (of the Constitution)

It is no secret that the BJP has a blatant disdain towards the Indian Constitution, it often comes across as if they’ve never read it. We can see this in their CAA which violates Article 14 of the Indian constitution, the undemocratic abrogation of Article 370 or the crackdown on journalists and peaceful protestors which is a blatant attack on Free Expression & Freedom of the Press.

Most people are usually unable to stick to their resolutions, but we implore the BJP to adhere to the above promises for a better and more democratic way of governance.