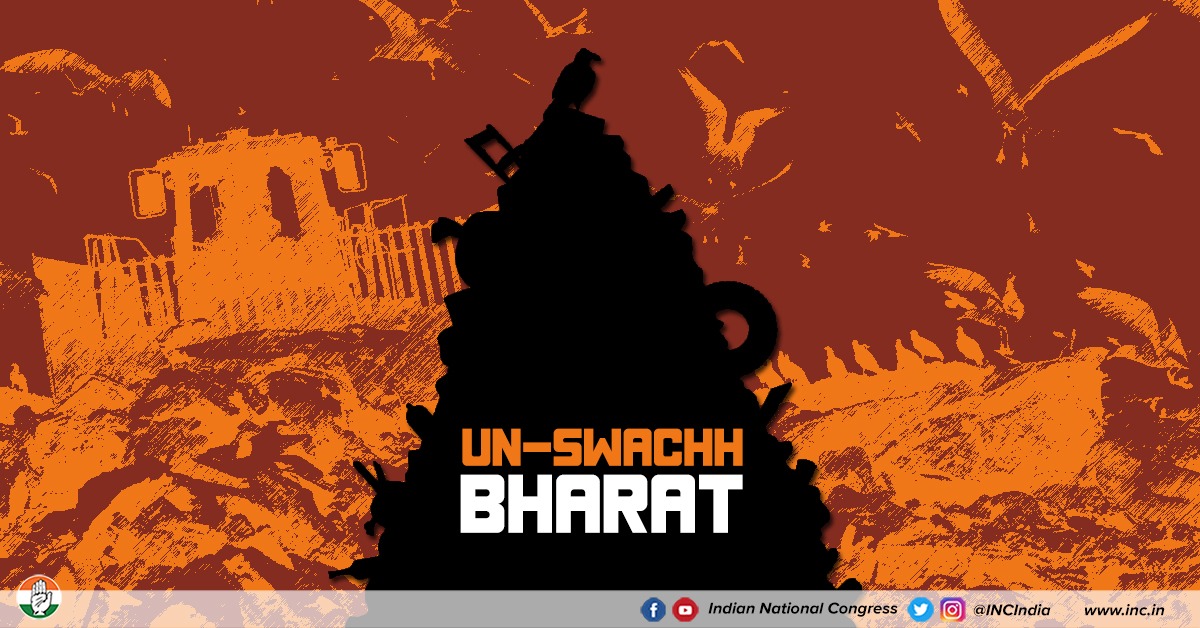 As India celebrates 150 years of Mahatma Gandhi, four years of Swachh Bharat comes dragging behind. With every step our country takes forward, the people are pushed two steps backward. Four years ago, on 2nd October, PM Narendra Modi rebranded UPA’s Nirmal Bharat Abhiyan and covered the corrupt canvas of his government by green promises.  PM Modi’s promise of making the country ODF (Open Defecation Free) by October 2, 2019 was just another gimmick that drove the entire country into a political abyss.

Modi government claims that 20 of the 35 States/UTs have reached 100 per cent household toilet coverage and 60% of the villages have been declared ODF. However, household toilets cannot be declared ODF till all the inhabitants start using them. One of the major concerns that Modi government fails to address is the poor drainage and waste-water management. More than half of the toilets which have been constructed, struggle with poor water supply, which is the most crucial factor in ending open defecation. In every part of the country, people are being subjected to a false image of ODF India, when in reality only the milestone of providing toilet coverage has been met. Standing Committee on Rural Development (2017-2018) is quite perplexed as to how ODF can be created without the availability of adequate water provisions. In a report tabled in Gujarat’s legislative assembly on September 19, the Comptroller and Auditor General of India (CAG), said that the state’s claim of being ODF was wrong; in fact data was fudged to achieve this. In the audit that covered eight districts, 29 per cent of the households had no toilets at all; forget about building and not using. CAG report also found out that the toilets constructed under SBM could not be used due to lack of water connection.

For the fiscal year 2017-18, the Ministry of Drinking Water and Sanitation (MDWS) was allocated an amount of Rs. 7,050 crore of which only Rs. 4,911.50 crore was released upto February 16, 2018. Similarly, as far as the on-ground performance is concerned, the Committee found that during the year 2017-18, out of 68,770 habitations proposed to be covered; only 32,778 were actually covered. Huge unspent balances for two prominent schemes of MDWS i.e. SBM(G) and NRDWP,  amounted to Rs. 9,890 crore and Rs. 3577.81 crore respectively. Swachh Bharat Mission (SBM) has given states autonomy to conduct surveys to check ODF status in villages and report back to the Centre. As a result, the process which should take six-nine months for verification of huge sample sizes, was ‘miraculously’ completed in just three days. Many toilets evaluated under the ODF verification have been dysfunctional and non-usable. In fact the committee recommended re-survey of areas already declared as ODF.

What about Safe Defecation Mechanism?

According to Research Institute for Compassionate Economics (RICE), more than half of rural households still practice open defecation, which is leading to pollution of landscapes and millions of unavoidable deaths. While all the Government expenditure is going on useless promotion and celebrity endorsement of the SBM, nobody is talking about the safe disposal of solid and liquid waste generated out of these new toilets. (Read: Open defecation free and manual scavenging). Without a proper faecal disposal plan, rural households face a much bigger problem of becoming a defecation collection site. If we take into account the ‘verified’ number of new toilets constructed, almost 1,00,000 tonnes of faecal matter is getting collected every day. 30% of generated waste and sewage is treated in urban areas, it seems it will take a long time to make the sanitation campaign successful. As per the guidelines, government should focus on solid liquid waste management once the villages become ODF; yet states are hardly considering this factor. Devoid of the basic training in safe defecation practise, most of the people are still facing problems in using right techniques. Most of rural India is still dependent on pit toilets. But the problem is instead of a twin-pit system which is advocated by the experts, they are using one-pit system. Unfortunately, neither the size nor the number of pits are being monitored by the government.

Hence, we would urge the Modi Government to spend the unused balances in prominent and big States like Madhya Pradesh (Rs. 866.68 crore), Assam (Rs. 606.30 crore), Uttar Pradesh (Rs. 2,836.82 crore), Jharkhand (Rs. 221.08 crore) and Chhattisgarh (Rs. 214.77 crore) into educating people and providing Safe Defecation Mechanism rather than splurging on promotional activities and spreading hate crimes. The failure of the Modiji’s pet-project that has been advertised world over only for the sake of photo-ops is a critical sign in how the BJP has managed to ruin an effective program initiated by the UPA government.