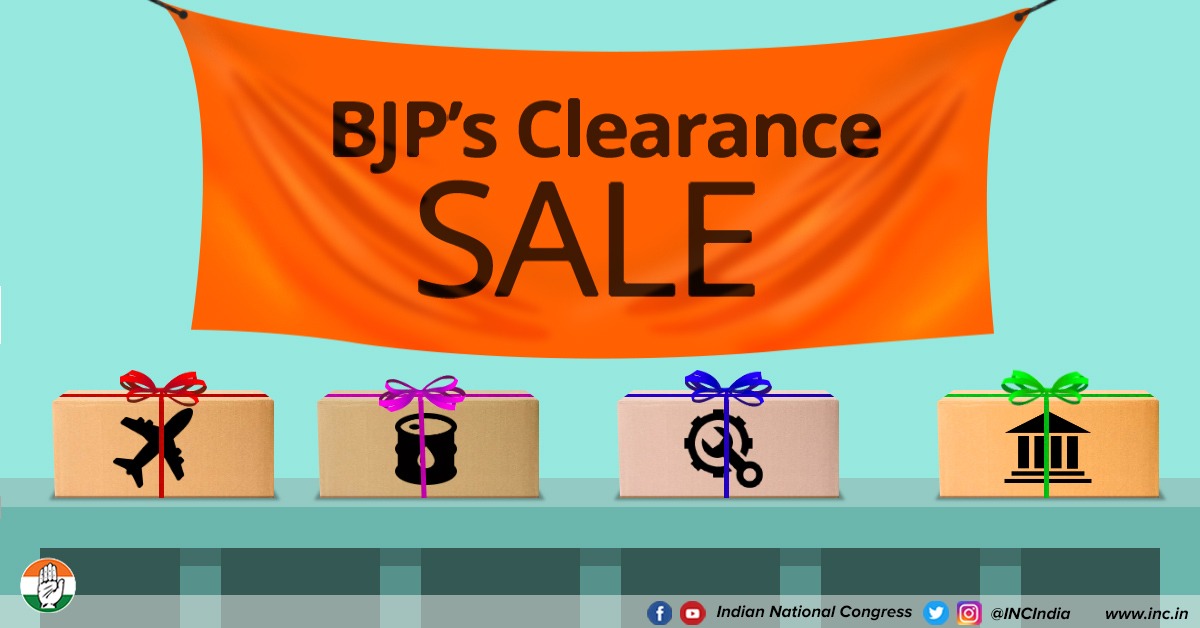 After the windfall gains of last year in the disinvestment sector, the government had set an ambitious target for the current fiscal. However, when it comes to the BJP, ambition and reality meet at only one focal point, and it’s called ‘nowhere’, as ‘planning’ is never invited to the party, and this is reflected in this year’s disinvestment proceeds figure, which are seriously lagging behind.

For the fiscal year (FY) 2017-18, the PM Modi-led government had set a target of Rs. 72,500 crores from disinvestment proceeds. The proceeds from disinvestment went well past the targeted number, and the final figure for the FY 2017-18 ended at Rs. one lac crores, as claimed by the government. Therefore, the target for the current FY has been set at Rs. 80,000 crores. However, it is not so straight forward when it comes to disinvestment; actually, it’s never straight forward when it comes to BJP, there is always a crooked, a more sinister angle to it. A more holistic understanding and discussion around the disinvestment should clear the air.

Is disinvestment a ‘reform’?

Often when it comes to boasting about policy reforms and achievements, the BJP quotes its disinvestment figures and future objectives as one of the principle achievements. However, the fact of the matter is that disinvestment is no reform. Let’s take Air India as an example. When the government stated its ambitious intention of strategic sale of Air India, it was hailed by many as a major ‘reform’, like that of the privatisation and liberalisation of 1991. It is difficult to understand how mismanaging public assets and then selling them off can be termed as reform, it must be called-out for what it is, a failure. It would have been a major reform if the government would have made the required strong and visionary changes necessary to make Air India profitable, but again, when it comes to BJP, ambition and reality rarely meet as planning is never invited to the party. Obviously, when a government has little to show on the achievement front, it will want to create the illusion that selling the ‘family jewels’ is a major achievement.

Is disinvestment good or bad?

The reform of privatisation, which commenced in 1991 and has been going since then, had led to disinvestment taking place in various public sector enterprises. It was much needed then, and is still needed, but it must not be done in the form of fire-sales, as the BJP-led government is doing. There is a famous saying, “government has no business being in business”, which PM Modi quoted in his address to over 300 members of the US-India Business Council during his 2014 USA visit. There is a lot wrong with this argument. For starters, this statement is a perfect example of the economic model envisaged by the BJP. The BJP’s ideology supports a trickle-down economy model where a few big business houses make money and the rest of the nation is expected to feed on the crumbs dropped by them, that is trickle-down economy for you. For this very reason, the BJP intends to sell government owned undertakings to the private buyer. The BJP clearly does not understand the very reason for which these undertakings were setup. The primary motive of these companies was not to make profit but to provide goods and services to the common citizen of the nation, which leads to strengthening of the people and, subsequently, the nation. This is the Congress’s vision of development – the bottom-up model. Here we intend to strengthen the very core of the nation, which is the people, even if it means sacrificing profits. Whereas, the profits are essential to the BJP as it is not a government of the nation, it is a government of the ‘few’. Therefore, disinvestment is not the ‘elephant in the room’, but BJP’s approach towards it, definitely is.

Is there a sinister motive behind PM Modi’s government’s disinvestment drive?

The facts that have come up in relation to the disinvestment agenda point towards a sinister plot. Here are a few examples:

The government often uses the argument that it needs the proceeds from the disinvestment to meet the exorbitant expenditure targets that it has set, but the questions arises exorbitant expenditure on what? As of last fiscal, the PM Modi-led government had spent record-breaking Rs. 4300 crores on advertisement; it has spent approx. Rs. 3000 crores on a single statue in Gujarat; and the list goes on. Whereas, on the other hand, India’s ranking in the Global Hunger Index has dropped from 55 in 2014 to 103rd in 2018; allocations to Sarva Shiksha Abhiyan (SSA) are consistently being cut; of the promised 13 AIIMS, only 3 percent of sanctioned funds released for 11 projects, and 60 percent faculty positions are vacant in five working AIIMS; and most importantly, excise duty on petrol and diesel has increased by 111% and 343%, respectively, compared to the UPA era. Where is this exorbitant expenditure going? It surely smells fishy. This is one reason why the BJP so desperately wants to be in power in 2019, it has to cover a lot of tracks.