From Mein Führer to Mein Fakir 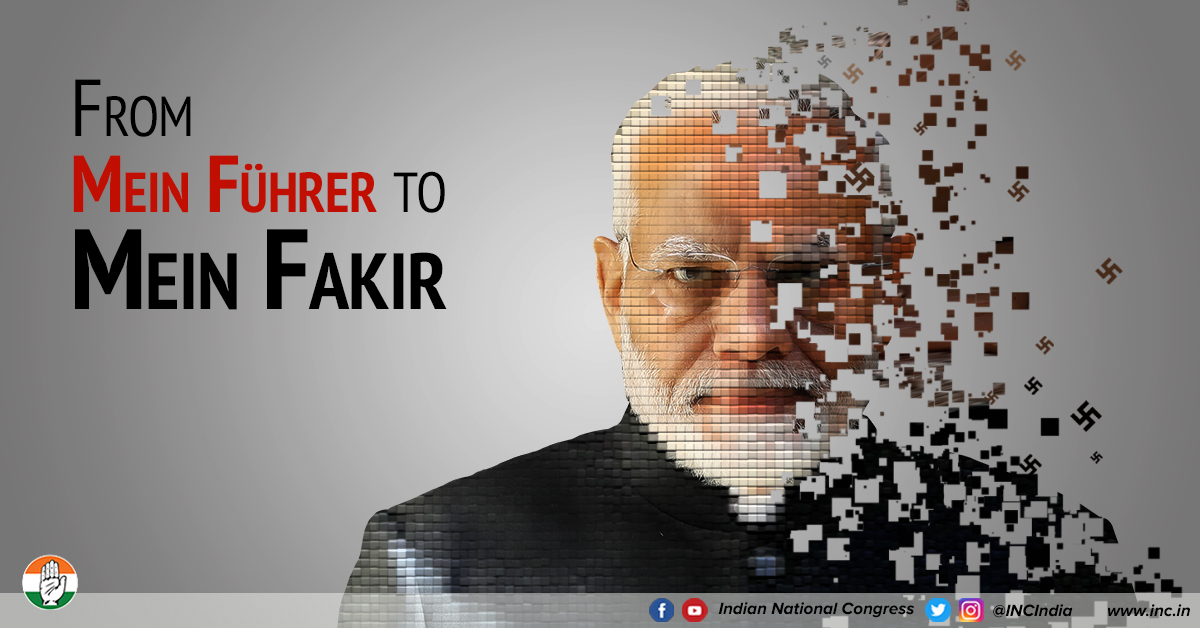 From Mein Führer to Mein Fakir

India, the world’s largest democracy is witnessing brutality, illegal detentions, crackdowns on dissent, mass violence and the continued spread of nationalist propaganda. When peaceful protestors, students, teachers and a certain section of society are subjected to physical violence, it is time to take a step back and identify the problem. What is going wrong in the secular democratic nation that 134 crore people call home?

One can easily draw a parallel of the current government with the fascist Nazi regime of Germany & find several similarities. It is no secret that the Rashtriya Swayamsevak Sangh (RSS), the parent organisation of the BJP, drew inspiration at its onset from right wing groups in Europe during World War Ⅱ. A large share of the RSS’ attraction for these totalitarian regimes was due to their fascination with the way Italy’s Mussolini and Germany’s Hitler were able to remake their countries after the ruins of war, into prosperous economies & military strongholds. The RSS was also particularly inspired by Germany’s eradication of its Semitic population.

RSS’ first head, MS Golwalkar and the party’s idol, VD Sarvarkar, admired Hitler for his ideology of cultural nationalism. On similar lines, influenced by German Nazi’s belief system, the RSS was formed, with the intent to spread Hindutva and ‘cleanse’ India. It is something that the current Prime Minister, Narendra Modi, identifies with and strongly believes in.

The RSS has been banned four times before, the first during the British rule and then thrice by the GOI after independence. The reasons were monumental, the first in 1948, when Nathuram Godse, a member of the RSS, assassinated Mahatma Gandhi. The second time was during the emergency, and finally in 1992, after the demolition of Babri Masjid which was carried out by the group. Reading their history, which has always been public knowledge, why are we surprised about the RSS’ present fascist rhetoric?

The BJP is an extension of the RSS - which acts as the BJP’s ideological figure head. Today the nation has begun to take notice of eerie similarities between the present govt & that of Hitler’s in 1930s Germany. They have noticed that the BJP govt is always at the centre of — the pulverisation of the Constitution, the stress on militarism, the use of certain symbols that represent past greatness, the emphasis on nationalism and the exclusion of minorities from the nation. All of these are directly in line with the movements that Europe saw.

Today, our students from top universities are being brutalised in the name of nationalism, the people expressing their dissent are being detained, those detainees are being tortured in prison and the voice of a mass number of Indians is being muted with the help of lathi charges, pellet guns and tear gas shells. The economy is in free fall, while the government is prioritising its  divisive agenda. Moreover, the gag on ministers, journalists and the judiciary has led to the passing of Citizenship Amendment Act, talks about nationwide National Register of Citizens and implementation of National Population Register with the aim of the eradicating illegal immigrants or “termites” as the Home Minister, Amit Shah likes to call them.

While we cannot compare the current situation to the Holocaust, we can draw parallels to the regime that led to it. Our current Prime Minister, Shri Narendra Modi has spent most of his life servicing the RSS as a pracharak, or an active promoter. He is one of them and thinks and speaks just like them. He is a product of their propaganda, their beliefs & their actions. That in itself explains his calculated silence one the atrocities taking place over the last month & the actions of his govt, hi party & its affiliates.