Good News:Petrol Prices Down Rs 10 in last one year 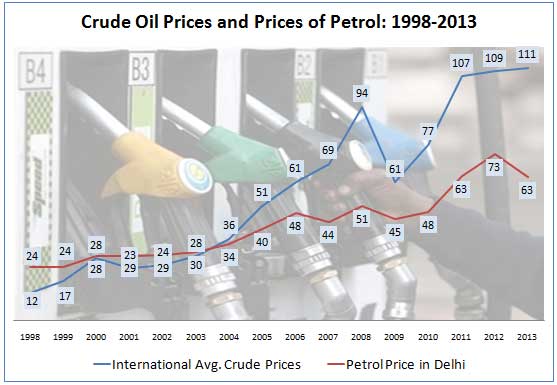 Good News:Petrol Prices Down Rs 10 in last one year

Petrol prices in Delhi are Rs 63.09 per liter, same as they were this time in 2011. The price of petrol has come down by more than Rs 10 per liter in the last one year, providing relief to the common man.

The government, however, had to deal with a massive fuel subsidy of Rs 1,61,029 crore in the last financial year and we would have seen a much larger subsidy bill in 2013-14. Reforms, hence, were a necessity for the overall financial health of the country.

The prices of petrol had seen a record high in May 2012 when consumers in Delhi had to pay Rs 73.18 per liter. The last one year has seen the prices of petrol drop Rs 10, one of the most significant drops in the history of India. What is even more important here is that it is happening when the international crude oil prices are close to their highest levels and the Dollar exchange rates have also been very high.

Crude oil is the input for petroleum products and when crude prices go up, the government has no other option but to push up the petroleum prices. The UPA government, however, has tried its best to ensure that the common man is not overburdened by the rise in the international crude prices.

In the last days of the NDA government, the international crude price was USD 36.05 per barrel while petrol was selling at Rs 33.71 per liter. If the UPA government was following the same pricing policy, the price of petrol in Delhi would have been Rs 103.80 per litre, about Rs 40.71 more than the current price.

The crude oil prices have gone up from USD 36.05 to USD 111.01, an increase of nearly USD 75 or a near three-fold increase. Petrol prices, however, have only increased by 87%, during this period.

One would also have to take into account that the forex rates. The dollar exchange rate in 2004 was Rs 44.72 to a US Dollar which has now moved to Rs 53.94 to a US Dollar now. This 20% jump in the value of the US Dollar has only added to the problems on the petroleum front.

The Congress-led United Progressive Alliance has been able to significantly reduce the price of petrol by reforming the petroleum pricing paradigm. A rationalized pricing approach towards pricing of petroleum products has not only helped the government reduce petrol prices, it has given the government room for fiscal consolidation.

In simple terms, the government and oil marketing companies have been able to bring down the prices of petrol through much needed price rationalization. While keeping inflation under check has been one of the prime concerns, the key effort was to ensure that the poorest Indians did not feel the pinch of rising prices.

Kerosene is the primary source of lighting in a large number of our poorest homes and hence increasing the price of kerosene would have meant additional burden for our poorest families. The UPA government, hence, did not increase Kerosene prices and continues to loose Rs 27.93 per liter.

The Ministry of Petroleum and Natural Gas on and the oil marketing companies are focused on ensuring that the 'under recoveries' from the sale of Diesel and LPG are kept to the lowest possible. While the prices of international crude have averaged at USD 111 in 2013, India is getting its crude at US$ 101.34, which leads to an overall 10% discount.

The subsidy on LPG was costing the government almost as much as its allocation for MNREGA and this included a large segment of population which could afford to buy LPG at market prices.

The prices of petrol are expected to come down further in the coming months but what it is even more important, this would help the country emerge stronger. This would bring down our fiscal deficit make India an even more attractive destination for global investments.