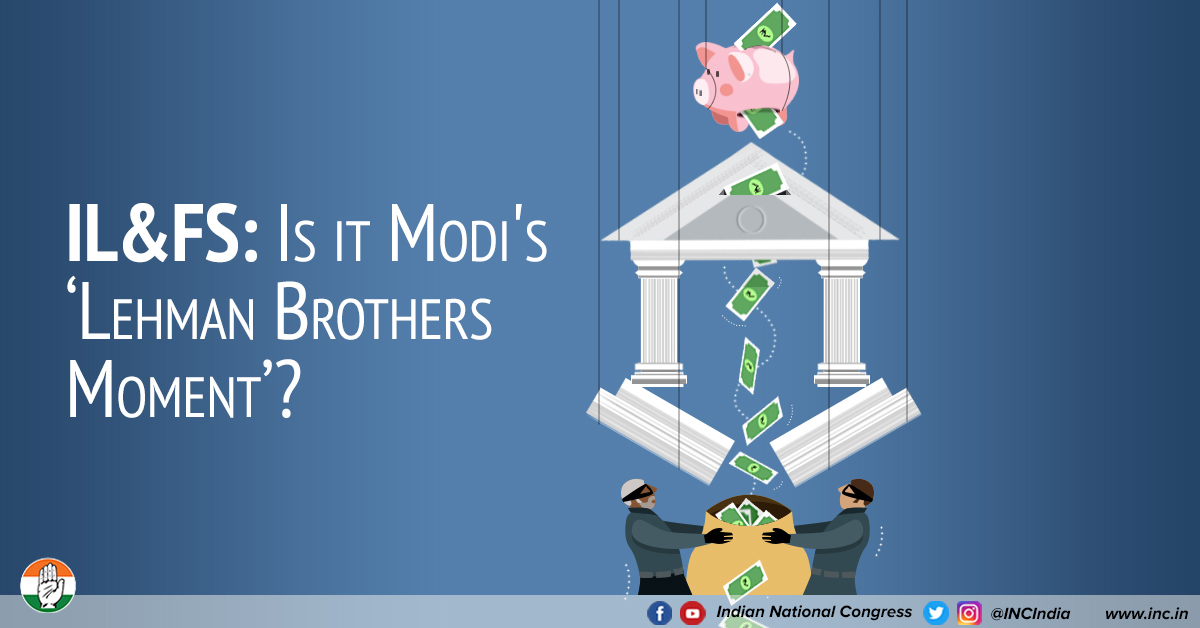 It is no secret that under PM Modi-led government the Indian economy has been in doldrums. This has resulted in several severe crises, one which is a ‘disease’ called NPA. Under the PM Modi-led government, the ‘disease’ called NPA has taken a cancerous form as there has been an approx. 400 percent rise in NPAs under the present government. One symptom of this ‘cancerous ill’ has manifested itself in crises such as GSPC and IDBI, among others.

Now, an even graver issue has come to the fore – IL&FS. IL&FS, which is, primarily, an infrastructure company – currently working on important projects such as Chenani-Nashri tunnel – is heavily invested with public money. LIC, Central Bank of India and SBI jointly own approx. 39 percent of the company. In September, rating agency ICRA downgraded the credit rating of IL&FS to default, after it failed to meet repayment obligations of Rs. 12,000 crore in short-term and long-term borrowings, including the default on Rs. 1000 crores loan from Small Industries Development Bank of India (SIDBI). The symptoms were there to see, only if someone (read: the government) was paying attention. IL&FS’s debt increased by a whopping Rs. 42,420 Crore in just four years of PM Modi-led government i.e. an increase of Rs. 900 crores every month. The debt-equity ratio – which measures leverage of a company – increased by 117 percent, from Rs. 7.71 in 2013-14 to Rs. 16.78 under the BJP-led government. The same is reflected by the fact that for the year 2017-18, Current Liability of IL&FS has mounted to Rs 37,089 Crore as against Current Assets of Rs. 31,259 Crore. This means that IL&FS will have a severe cash crunch and would not be able to pay off its debts. However, despite being a company which is heavily invested in major infra-projects, such losses and consequent debts did not draw the government’s attention towards ensuing crisis.

The fact of the matter and the plinth of the crisis is the economic mismanagement by the present government has left IL&FS and many other organisations in such a precarious situation. However, lamentably, this not where the misdeeds of this government end. To cover-up for their incompetency, or due some other sinister motive, the government has undertaken an irrational and evidently desperate move. LIC and SBI are being coerced by the government to invest Rs, 7500 crores in IL&FS, i.e. hard-earned savings of the common people are being used to cover-up for the government’s incompetency, or other sinister motives.

Such moves and intentions of the government demands our utmost attention as it could have severe consequences for our economy and, subsequently, for us. Not so long ago, Oil and Natural Gas Corporation (ONGC) acquired – in reality, coerced to buy–  low-quality blocks from the Gujarat State Petroleum Corporation (GSPC), which were rightly questioned by the Congress party and third parties –  such as Kotak Securities –  for it was full of loopholes. Later, it was forced to acquire government’s stake in HPCL in an off-market deal at prices which were 14 percent higher than closing share prices of that day. Such coercions had severe implications on a healthy company, as is evident from the letter of General Secretary of the Employees Mazdoor Sabha of the ONGC. The debt of ONGC has risen from Rs. 55,619 crores in 2016-17 to Rs. 1,11,533 crores in 2017-18, i.e. a 100.5 percent rise in just one year! However, this saga does not stop just at ONGC as similar scenario played out in case of LIC-IDBI deal. The move made headlines – for the wrong reasons – as LIC was seen as rescuing another government disinvestment project and, more importantly, for the fact that LIC was seen investing in one of the worst performing banks.

The autocratic and coercive action of the PM Modi-led government has left the ONGC in a cash-strapped situation. As per former ONGC director, "ONGC is heavily leveraged now", as the cash reserves have declined significantly. Taking lessons from such instances, it is imperative on the opposition to warn the government that such sinister moves of the government can severely harm even behemoths, such as LIC, of the Indian economy. The government must not put the nation on the line for its petty gains, or due to its incompetency. Organisation such as LIC have taken years to build their esteemed reputation, which is why the common people of India willingly invest their life-long precious savings into its schemes. Such autocratic and illegal actions of the government have the potential to lead to similar scenario like the ‘Lehmann Brothers Moment’, implications of which are evident and worrisome. The government has no right to toy with the future of the people of India.