India will not go back on reforms: Hon'ble Prime Minister 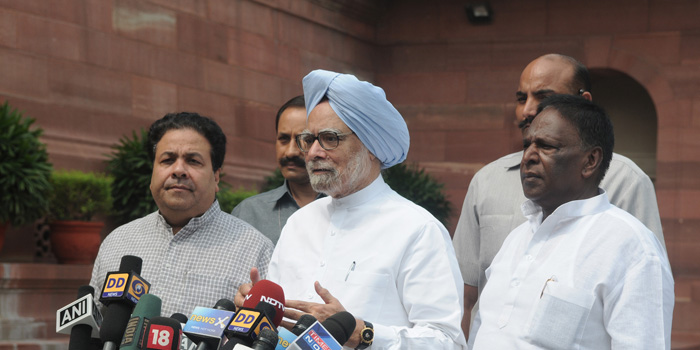 India will not go back on reforms: Hon'ble Prime Minister

Prime Minister Dr Manmohan Singh on Friday reaffirmed that India would not go back on policies that have helped the country grow in the last two decades and said the Indian economy continues to be strong on fundamentals.

Addressing the Lok Sabha on Friday, the Prime Minister said times like these tested the will and resolve of the nation and called upon political parties to support the reforms push. 'I urge across political parties to work towards & join in the Government's efforts to put the economy back on the path of stable growth,' Dr Singh said.

Following is the full text of the Hon'ble Prime Minister's speech:

Madam Speaker and Hon'ble Members of this august House,

The movement of the exchange rate of the Rupee recently is a matter of concern to the government.  The Rupee has depreciated sharply against the dollar since the last week of May. There are concerns, and justifiably so, of the impact this would have on our economy.

What triggered the sharp and sudden depreciation was the markets' reaction to certain unexpected external developments. On May 22, 2013, the US central bank indicated that it would soon 'taper' its quantitative easing as the US economy was recovering.  This led to a reversal of capital flows to emerging economies which are now sharply pulling down not just the Rupee, but also the Brazilian Real, the Turkish Lira, the Indonesian Rupiah, the South African Rand and many other currencies.

While global factors such as tensions over Syria and the prospect of U.S. Federal Reserve tapering its policy of quantitative easing have caused general weakness in emerging market currencies, the rupee has been especially hit because of our large current account deficit and some other domestic factors. We intend to act to reduce the current account deficit and bring about an improvement in the economy.

In 2010-11 and the years prior to it, our current account deficit was more modest and financing it was not difficult, even in the crisis year of 2008-09. Since then, there has been a deterioration, mainly on account of huge imports of gold, higher costs of crude oil imports and recently, of coal. On the export side, weak demand in our major markets has kept our exports from growing. Exports have been further hit by a collapse in iron ore exports. Taken together, these factors have made our current account deficit unsustainably large.

Clearly we need to reduce our appetite for gold, economise in the use of petroleum products and take steps to increase our exports.

Coming back to the effects of the Rupee depreciation, we must realise that part of this depreciation was merely a needed adjustment. Inflation in India has been much higher than in advanced economies. Therefore, it is natural that there has to be a correction in the exchange rate to account for this difference. To some extent, depreciation can be good for the economy as this will help to increase our export competitiveness and discourage imports.

There are many sectors which are regaining competitiveness in export markets as a result of the fall in the exchange rate. Over the next few months, I expect the effects of this to be felt more strongly, both in exports and in the financial position of exporting sectors. This in itself would correct the current account deficit to some extent.

However, foreign exchange markets have a notorious history of overshooting.  Unfortunately this is what is happening not only in relation to the Rupee but also other currencies.

The RBI and Government have taken a number of steps to stabilize the rupee.  Some measures have given rise to doubts in some quarters that capital controls are on the horizon. I would like to assure the House and the world at large, that the Government is not contemplating any such measures. The last two decades have seen India grow as an open economy and we have benefitted from it. There is no question of reversing these policies just because there is some turbulence in capital and currency markets. The sudden decline in the exchange rate is certainly a shock, but we will address this through other measures, not through capital controls or by reversing the process of reforms. The Finance Minister has clarified this, and I take this opportunity to reaffirm our position.

Ultimately, the value of the rupee is determined by the fundamentals of our economy. While we have taken a number of actions to strengthen those fundamentals, we intend to do more.

Growth has slowed down in recent quarters. I expect growth in the first quarter of 2013-14 to be relatively flat, but as the effects of the good monsoon kick in, I expect it to pick up.

There are many reasons for this optimism. The decisions of the Cabinet Committee on Investment in reviving stalled projects will start bearing fruit in the second half of the year.  The full effect of the growth friendly measures that have been taken over the last six months, such as liberalizing norms for FDI, resolution of some tax issues of concern to industry and fuel subsidy reform will come into play over the year resulting in higher growth particularly in manufacturing.  Exports are also starting to look up as the rest of the world is improving its growth. So I believe growth will pick up in the second half of the fiscal year barring extreme unforeseen eventualities.

Inflation measured by the Wholesale Price Index has been coming down, even though inflation measured by the Consumer Price Index is still too high. The depreciation of the rupee and rise in dollar prices of petroleum products will no doubt lead to some further upward pressure on prices. The RBI will therefore continue to focus on bringing down inflation. The favourable monsoon and the anticipated good harvest will help bring down food prices and ease the task of controlling inflation.

All in all, the macro-stabilization process which should support the value of the rupee is under way. I expect that as the fruits of our efforts materialize, currency markets will recover.

Even while we go about doing what is necessary, it is important to recognize that the fundamentals of the Indian economy continue to be strong.  India's overall public-debt to GDP ratio has been on a declining trend from 73.2% of GDP in 2006-07 to 66% in 2012-13. Similarly, India's external debt is only 21.2% of GDP and while short-term debt has risen, it stands at 5.2% of GDP.  Our forex reserves stand at US$278bn, and are more than sufficient to meet India's external financing requirements.

Many foreign analysts worry about banking problems in the wake of the currency crisis. The Indian banking sector has seen some rise in bad loans. The question that needs to be asked is whether there is a liquidity problem or a solvency problem for the borrowers. My belief is that there is a liquidity problem. Many of the projects are not unviable but only delayed, in contrast to the overbuilding that has characterized the banking sector problems in other countries. As these projects come on stream, they will generate revenue and repay loans. Our banks are fortunately well capitalized much above the Basel norms and have the capacity to provide for any non-performing assets until those assets are turned around.

The easy reforms of the past have been done. We have the more difficult reforms to do such as reduction of subsidies, insurance and pension sector  reforms, eliminating bureaucratic red tape and implementing Goods and Services Tax. These are not low hanging fruit and need political consensus.

It is here that I urge Members across the political spectrum to reflect on the need of the hour. Many laws that are necessary are held up for lack of political consensus. Reforms such as the Goods and Services Tax, which everyone agrees is essential to restore growth, require States to come to an agreement.  We need to forge consensus on such vital issues.   I urge political parties to work towards this end and to join in the government's efforts to put the economy back on the path of stable and sustainable growth.

There may be short term shocks to our economy and we need to face them. That is the reality of a globalised economy, whose benefits we have reaped in the last 15 to 20 years.We will need to ensure that the fundamentals remain strong so that India continues to grow at a healthy rate for many years to come. That we will ensure. We are no doubt faced with challenges, but we have the capacity to address them. It is at times like these that the nation shows what it is truly capable of.