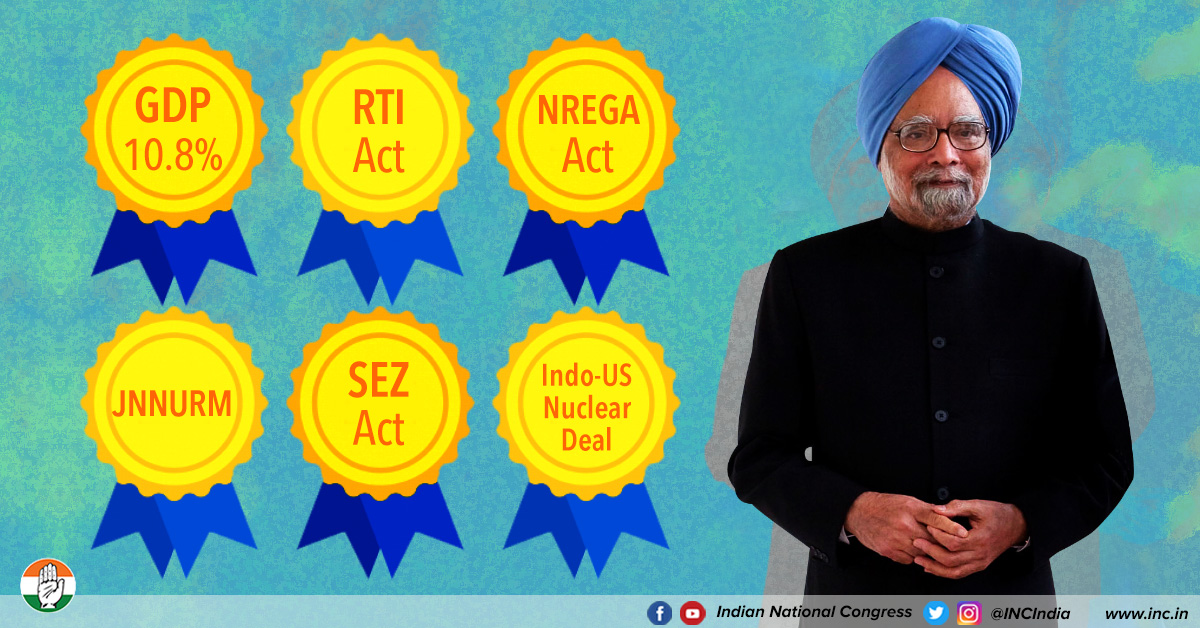 India saw its GDP growth edge past the 10 per cent mark under Dr. Manmohan Singh, an able statesman, economist, and administrator, who has played a central role in bringing in economic reforms & modernisation. This was the highest recorded GDP in India. India also saw the launch of far-sighted and well integrated schemes such as the Aam Aadmi Bima Yojana, National Girl Child Day programmes, Jan Aushadhi Schemes, Free LPG Connection to BPL Families, and National eGovernance Plan greatly benefitting all sections of society, and taking the country towards a more robust economy, better health services, education for girls, and digital growth.

His negotiation skills and deft diplomacy shone through during the India-US Nuclear Deal in 2005 through which India was recognised, for the first time, as a nuclear weapons power. We got the same benefits and advantages as the signatories of the Non-Proliferation Treaty, without being a signatory ourselves, as the NPT has been considered as not being aligned with our best interests. We consolidated our ties with our neighbours, and initiated the Look Middle East Policy. 2005 also saw the introduction of the Right to Information Act aiming to promote transparency in government institutions.

In the same year, a large-scale city development and modernisation programme called Jawaharlal Nehru National Urban Renewal Mission was launched. Under this programme solid waste recycling & management, restructuring of drainage systems, construction of an important road connecting Raj Bhavan and Begumpet, construction of overpasses and laying of railway lines was commissioned. India also saw the Special Economic Zones Act come into effect in 2005, enacted to drive the nation’s economic growth with a view of attracting investments into the country, and through the generation of foreign exchange through the export of goods and services.

In 2006, Dr. Singh reviewed two flagship programs: Sarva Shiksha Abhiyan and Mid-day Meals Scheme. As a result Gross Enrolment Ratio increased while the number of ‘out of school’ children dropped from 2.5 crores to 96 lakhs over the next two years. MGNREGA was also introduced, the world's largest rural job guarantee scheme. In 2012-13, the scheme provided employment to over 4.98 crore households, generating more than 213 crore person-days of employment.

In 2011, Dr. Manmohan Singh launched the Mobile Number Portability (MNP) service, helping India join a group of tech advanced countries like USA and China. In 2012, India was deleted from the list of polio-endemic countries by the World Health Organisation (WHO) and was declared Polio-Free in 2014.  The Protection of Children from Sexual Offences Act was introduced as well. On the education front, central universities increased from 17 to 44 during 2004-13.

Dr. Manmohan Singh led India to great new victories and many new developments. He continues to stand tall amongst his contemporaries as a man who did not shy away from speaking the truth and taking bold decisions. Indians will forever be proud that Dr. Manmohan Singh served the nation for ten long prosperous years.