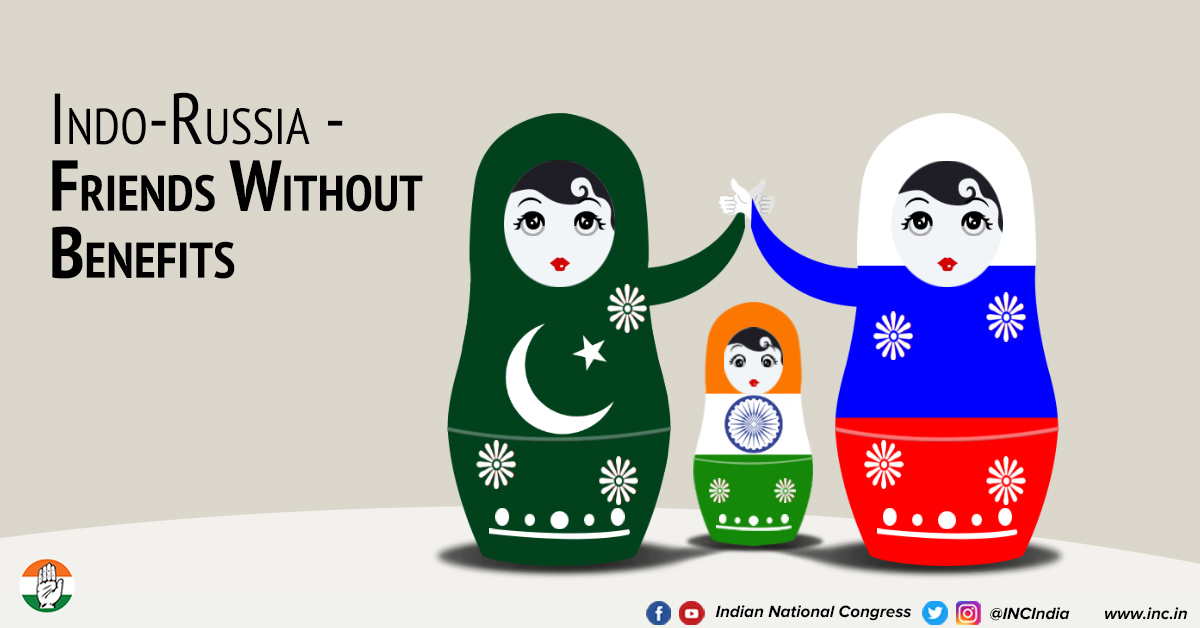 PM Modi’s failure at his much hyped ‘Neighbourhood First’ policy is well documented, and must be understood to identify his lack of diplomatic skills and even graver lack of knowledge of international politics and its crux – every nation-state is sovereign in the international system. A glaring example of his failure to understand this basic but essential principle is, Indo-Nepal relations. India’s alleged economic blockade in 2015 has not only pushed the Nepalese polity away, but it has alienated the Nepalese people even farther. Unfortunately, the blunders in foreign policy – one aspect of ‘Modi-syndrome’ that our country is suffering from – are not just limited to our neighbourhood, but extends well beyond our border States.

Russia, and its predecessor state – USSR, has been a strong and time tested ally of India. Both countries have enjoyed a long and fruitful journey of strategic, military, economic and diplomatic engagement. However, lately, all is not well between the once ‘exclusive friends’. How could it be? It has Mr. Modi’s imprint on it now.

To understand what has gone wrong within the ‘exclusive friendship’, we must first recall what was so right, which made it an ‘exclusive friendship’. Former USSR and now Russia have stood-by India in our most testing times such as 1971 war with Pakistan, and, equally importantly, on major issues that are integral to us – like Kashmir. Former USSR/Russia has played an integral part in the development of India, be it building of dams or nuclear power plants, or setting up institutions such as IIT. However, the ‘exclusive friendship’ is not so exclusive anymore. The same former USSR/Russia that refused to talk to, or engage with Pakistan, keeping Indian interests in mind, is now not just engaging with Pakistan, but supplying arms and holding joint military exercises. Since PM Modi came to power and started his engagement with Russia, Russia has signed a defence cooperation agreement with Pakistan, bilateral trade between the two countries has grown exponentially and Moscow is also working to help Pakistan build an 1,100-kilometer gas pipeline linking Karachi to Lahore. Under the defence cooperation agreement, Russia has sold Mi-35M combat helicopters to Pakistan, and both sides have held several counter-terrorism exercise on each other’s soil, in addition to the naval exercises called Arabian Monsoon. Questions must be asked – what went so wrong? The answer is simple: Narendra Damodar Modi.

The government often counters this issue with bringing numbers and facts related to defence deals, or business deals, that it has conducted with Russia. Before we fall for the BJP government’s farce again, we must keep in mind that these are economic dealings, like any other give and take transaction. India is with its deep pockets and rapid growing defence needs is the biggest buyer of defence products in the world. Any country with a mature defence industry would obviously be tempted to maintain good economic relations, but that does not mean that it would stand by us in times of grave danger. Such relations take time to develop, but more importantly, such relations require trust, which is built on sacrifice. Mr. Modi’s autocratic and dictatorial tendencies have led to disregard of institutions, and Mr. Modi’s imbecilic and erratic behaviour has led to many important and strategic relations being compromised, and has pushed India to an inferior position in the ‘bargain for power’ called foreign policy. This brings to mind a famous quote of Ralph Waldo Anderson, “it is one of the blessings of old friends that you can afford to be stupid with them”. PM Modi must be hoping so.