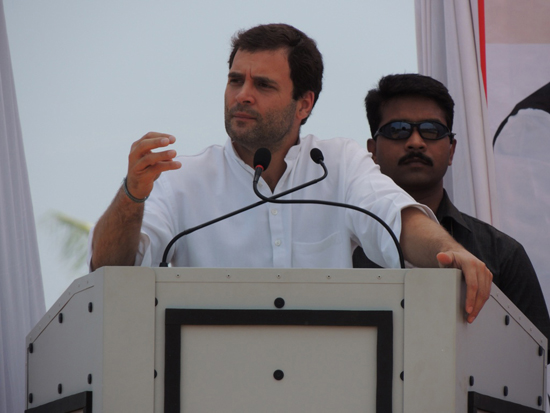 The people of Karnataka today gave a decisive mandate to the Congress Party, bringing an end to an era of corruption and the politics of religious fundamentalism. They have voted for economic resurgence of one of the brightest Indian states and an era of inclusive growth.

The Congress has been given the responsibility of running the state as the party won 121 seats of the 223 seats which went to polls on May 5, 2013.

What makes this win special is the fact that this is the first election after Shri Rahul Gandhi was promoted as the Vice President of the Indian National Congress.

In all his election rallies in Karnataka, Shri Rahul Gandhi had exhorted the voters to come out and vote for Congress in large numbers, so that the party would come to power in the state on its own, without needing the help of any allies. The Congress Vice President had said once the party was in a position to form the government on its own, then it could provide better governance, without being pressurised by any ally.

The people of Karnataka obliged.

The victory in Karnataka is as much a reflection of the faith of the voters in the clean governance that Shri Gandhi has assured the people of the state in each of his election rallies as it is a mandate against five years of BJP misrule.

"Despite the campaign against UPA, the people of Karnataka have spoken strongly. It's a defeat of an ideology," said Prime Minister Dr. Manmohan Singh, in his reaction to the electoral victory in Karnataka. Congress President Smt Sonia Gandhi said she was happy with her party's win. "We expected to win. It was a joint effort," she said.

Their verdict has been loud and clear. People of the state and the country, want progress for everyone. The fire-breathers went down without a trace. They are blaming one of their former leaders for the loss and still not owning up the fact that rarely has a ruling party been destroyed so completely in the electoral history of states in India.

In what has been a double whammy of a verdict by the people of Karnataka, it was not just a vote in favour of good governance that the Congress had always provided in the state, but it was an equally strong vote against the corrupt regime of the BJP, a vote against its poor governance. The Congress tally would have been considerably higher, had former BJP chief minister, BS Yeddyurappa's new party not cut into the anti-BJP vote.

For the BJP this is the moment of truth, as it realises that with the loss of its last bastion in South India, the party is now not in power, from Maharashtra downwards, in almost half of India. The Karnataka verdict has come as a body blow for the party which was trying to build a hype to pave its road to Delhi in 2014.

JD(S) and BJP have drawn level which has saved them from finishing a clear third in the state but the bigger question is, will the pundits now question the political ability of a man who claims to have all the answers. The election results have shown that politics of polarization and disruption does not have any place in Karnataka.

Meanwhile, in a rare moment of candour, BJP spokesperson Rajiv Pratap Rudy admitted this morning on national television that the man touted as their main vote catcher doesn't have a magic wand, that he can wave and win an election.

Sadly for the BJP, a lot of its supporters were expecting exactly that. The crowds that turned up to hear him in his election rallies were mistaken as votes, and the party thought, despite its five years of misrule, despite its poor governance, the voters would be charmed and vote for BJP.

They couldn't have got it more wrong.

In fact, in the areas where the he campaigned, BJP fared rather badly. In coastal Karnataka, where he had tried to stir up Hindutva-related issues, the party got all but wiped out.

In a desperate attempt to woo the young voters of Bangalore, the BJP had even come up with a separate manifesto, which promised among other things that pubs and bars in the city would be allowed to serve alcohol till midnight.

This, after the Hindutva brigade had terrorised young people in the state over the past five years, evicting them forcibly from restaurants, issuing dress codes for women. The voters didn't fall for this cheap gimmickry, and in Bangalore, as in other urban centres of the state, where the party was hoping to do quite well, the BJP fared rather poorly.

For the Congress the work has just begun in Karnataka. We shaped Bangalore as the world's IT backbone. In the days and months to come, the party would have to provide the good governance for which it has been given the mandate by the people.