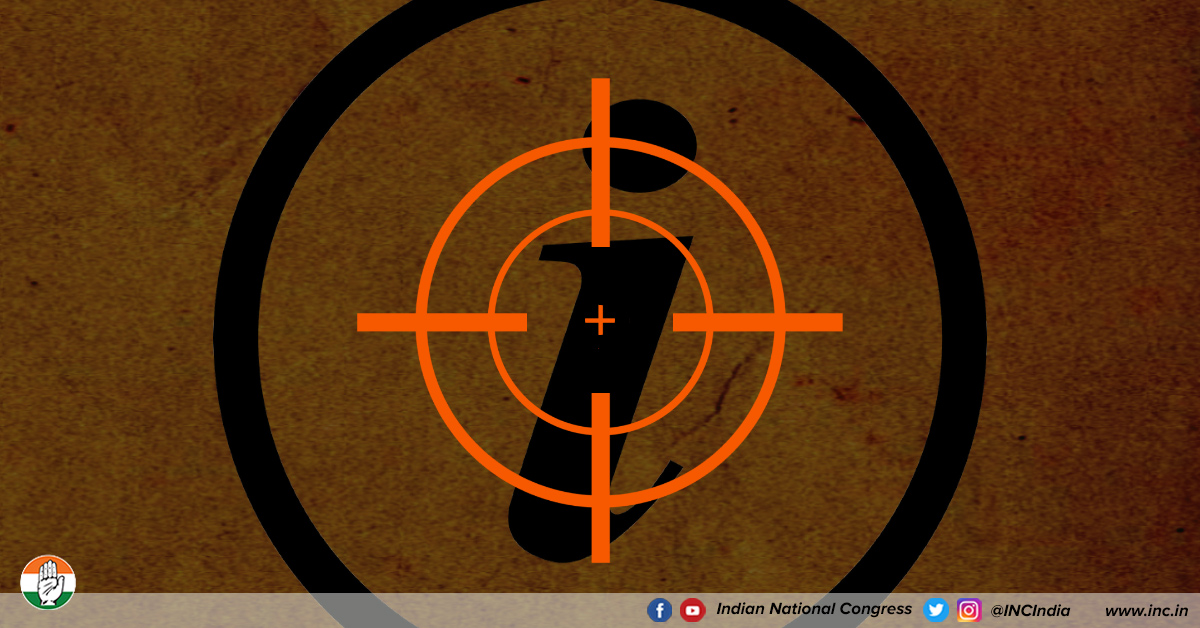 About 14 years ago, India witnessed the genesis of a transparency revolution. The citizens were empowered with an effective tool to enforce their ‘right to information’. Each Indian was enabled to participate in governance and hold “public authorities” accountable. Ever since, ‘transparency’ and ‘accountability’, have not remained mere rhetorical words, but have gone on to become cornerstones in the working of governments.

All this is thanks to the Right to Information Act 2005, passed by the Congress-led UPA Government. This exemplary legislation mandates timely response to citizen requests for government information. Under the provisions of the Act, Public Authorities are required to disclose information related to their organisation - functional, structural and financial matters as well as the powers and duties of its officers and employees, suo moto. In cases where such information is not made available, the Act ensures that citizens have the right to request for it from the Authorities.

This ‘Right to Information’ guaranteed under the Act is enforceable through a three-tier structure, as established by the Act itself. At the first level, Public Information Officers (PIOs), designated from within the Public Authorities, are required to provide information to an RTI applicant with 30days of the request. Appeals by citizens against the decisions of the PIOs go to an Appellate Authority, the second tier. At the head of this enforcing structure is the State Information Commission/ Central Information Commission, which look into citizen appeals against the orders of the Appellate Authority.

This accessibility to government information, provided to the citizens, has led to wide-ranging outcomes, from helping a student to find out what was holding up his passport application to information about the rehabilitation of villagers to be displaced by a power generation project, from fighting illegal selection in government jobs to favouritism in government contracts, more recently from exposing the Modi Government’s negligence towards women’s welfare to the poor working of the Railways under this present Government. The RTI filed by India Today resulting in the Indian Navy’s complete denial of charges levelled by PM Modi that former PM Rajiv Gandhi was on a holiday on INS Viraat, is just another example of how the lies of the Government & the Prime Minister can be exposed through RTI.

This ability of the RTI to expose the frauds and lies of the Government, is what Modi & Co. fear the most. Take for example, the case of Demonetisation. When citizens filed RTI appeals with the RBI about demonetisation, they were refused information on a range of queries from who had been consulted to the reasons behind the move and the cost incurred by scrapping the banned notes. In recent years, public authorities affiliated to the central government have denied information to citizens under the law on matters of vital public interest.

While steady dilution of the RTI Act became one of the legacies of the Modi Government, first time round; in its second term, the Modi Government is trying to hit the last nail in the coffin for this transparency law, through the Right to Information (Amendment) Bill, 2019. This Amendment effectively attacks the autonomy of the Information Commissions by giving the Central Government power to decide on the tenure, salaries and allowances and other terms of service of the Information Commissioners.

How can the State/Central Information Commissions, decide independently on matters of national importance, if their status is reduced to merely a departmental level?

How can the Information Commissioners, freely and fairly, disburse information of vital national importance exposing the political and bureaucratic class, if their own term in office is controlled by the same class?

An analysis of the Constituent Assembly debates clearly shows that all institutions which uphold the democratic nature of the Constitution, like the Election Commission, Finance Commission, CAG, etc. were given a Constitutional status, so as to keep them away from the interference of the legislative and executive and give them the powers of autonomy. The same logic was used in the formation of the Information Commissions, bodies essential for democracy. The BJP-led Central Government’s intention to subvert the historic RTI Act will greatly affect the Indian citizenry and rock the foundations of the Indian democracy. As UPA Chairperson Smt. Sonia Gandhi stated, “the present Central Government sees the RTI Act as a nuisance” and wants to destroy its very foundations. The RTI Act, which has helped over 60 lakh of our countrymen and women usher in a new culture of transparency and accountability, now stands on the brink of extinction.